In our recent article It’s Time To Position For The Endgame, Chris Martenson explained how the US Federal Reserve and its sister central banks around the world have been engaged in the largest and most egregious wealth transfer in all of history — one that has been drastically exacerbated by the covid-19 pandemic.

The official response, tremendous monetary stimulus by the central banks paired with massive fiscal stimulus from national legislatures, has been pitched as “saving the system”.

Yet, in reality, it has merely served to accelerate the transfer of capital from the public into the pockets of the already-rich.

Anyone with eyes can see how the central banks have abandoned all pretense of monetary fiduciary responsibility and have simply cranked their printing presses up to “maximum”:

In concert with this surge of liquidity, national legislatures have added their own emergency measures. In the US alone, the CARES Act pushed nearly $3 trillion in fiscal stimulus into the system, and will highly likely soon be followed by another $1-3 trillion depending on which party’s bill gets passed.

Despite these staggering sums, the amount of money trickling into the average US household has been meager and is drying up.

Instead, these $trillions are mostly finding their way into the coffers and share prices of corporations. We have seen the fastest and most extreme V-shaped recovery in the history of the financial markets since the March swoon. The major indices are now back to record all-time-highs, despite the major carnage covid-19 has wreaked on the global economy.

So who benefits from that? Oh yeah, the people who own those companies. The already-rich.

Remember: 84% of all stocks are owned by the top 10% of households.

So in a nutshell, the official response from our “leaders” in government to the pandemic threat has been: Rescue the markets at all costs!

Chris refers to this as the Leave No Billionaire Behind (LIBB) Program. As he describes:

Between March-April 2020, the Fed added a staggering $282 billion to the bottom-line wealth of US billionaires:

But that wasn’t enough.

So the Fed kept printing. And buying, buying, and buying more and more financial assets held – of course – mainly by the already-wealthy.

By May 2020 the total added became $434 billion, making all the US billionaires more billionaire-y:

But even that wasn’t enough for the Fed.  So it printed even more, increasing the total to $583 billion by June:

Yep, you guessed it. It didn’t stop there. By July, the grand total was up to $637 billion:

Considering that US GDP dropped by -32.9% (annual rate) and clocked in at an annual rate of $19,408 billion in the second quarter of 2020, the US Federal Reserve had granted an astonishing (truly!) 3.3% of the entire output of the entire country to US billionaires.  For doing absolutely nothing.

Yes, people have many reasons to be angry and to protest these days. But they ought to be furious with the Federal Reserve and its lackeys in Congress who have utterly and completely failed to check these egregious, unfair, and socially destructive policies that grossly reward the elite at the expense of the bottom 99%.

Let’s do a little math here. Handing 3.3% of the value of the entire economic output of 160,000,000 working people to roughly 600 individuals is the equivalent of granting each one of those 600 billionaires the entire yearly output of 9,020 people.

It’s like the Fed decided that each billionaire deserved to have 9,020 people become their slaves for the year.  How is that *not* psychopathic?  How is that fair?  What’s the plan here? Keep going until these 600 people own everything in the world?

And where’s the media on this? They happily parrot every statement the Fed makes, without asking even the slightest of critical questions. They are failing us badly, too.

Okay, so why should you care?

Because what the Federal Reserve is doing generates enormous systemic risks which could well destroy the economy and much of our future prosperity.

At heart, I am a conservative in the sense that I’d like to keep (i.e. “conserve”) what we’ve got, both ecologically and economically. I’d vastly prefer that we change our nation’s destructive path now on our own terms than being forced to on reality’s terms later on. As painful as the former may be, the latter will be much more so.

History is complete on the matter: one cannot print one’s way to prosperity.  It’s been tried over and over again and my view is that if it could be done, we’d all be speaking Latin because the Roman Empire with it brilliant engineers would have figured it out millennia ago and would never have collapsed.

If the Romans couldn’t work it out, it simply can’t be done.  Mathematically, it also doesn’t pencil out.  Money is a social agreement, a contract.  It’s not real wealth.  Taking the attempt to the extreme, what would happen if everybody had a billion dollars and nobody had to work?

So printing currency only manages to delay and exacerbate the inevitable by building up the energy for its own destruction.

And the longer the delay, the worse the reckoning when it ultimately arrives.

So to recap, the Fed et al have ensured that the covid-19 pandemic has resulted in a boom for the elites, while the rest of us are experiencing an economic Depression that could last for years: 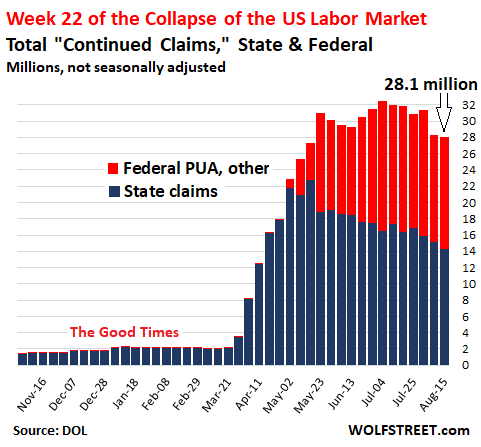 So, with the central banks hell-bent on supporting the rich by sending the prices of all financial assets farther into the stratosphere, is high/runaway inflation the natural next stage from here?

Will those worrying about a systemic “crash” from all the intervention and deformation be proved wrong?

We addressed these questions earlier this month for Peak Prosperity’s premium subscribers in Chris report Is High Inflation Now A Bigger Danger Than A Deflationary Crash?

Every so often, we’re encouraged by our paying subscribers to share an important report with the general public. This is one of those times.

If you’re not yet a subscriber, you can read the report in full, for free, by clicking here. (free registration required)