Here we are again. The markets are within a few percentage points of their all-time highs, but just can’t seem to muster the momentum to break out above them.

We saw similar conditions back in March/April and then again in July. Both times, the S&P dropped sharply after failing to remain above 3,000.

Both situations presented profitable opportunities to short stocks, which we alerted our readers to at the time.

Widening out our perspective even farther, it’s becoming increasingly clear that the motive power pushing the markets higher over the past decade has lost its drive. Today, the S&P is nearly same price it was a year ago. And very close to where it was at the start of 2018.

In short, it hasn’t really gone anywhere for over 20 months:

And in those 20 months, the S&P has been forming a tightening wedge, with little room left in it for the status quo to continue. A break above or below must happen soon:

So which way will it break?

To make the bull case, we have to ask: With stocks near their all-time highs, what’s not yet priced in to the market that can catapult prices higher from here?

Don’t look to earnings. With slowing global GDP, it’s little surprise that the upcoming Q3 2019 earnings season is expected to be a dud.

Total Q3 earnings are forecasted to be down -4.8% vs the same period last year. Zacks predicts that 12 of the 16 industry sectors it tracks will report negative earnings growth.

At this point, there are only two possible developments not yet fully priced in to today’s “priced-to-perfection” markets that could justify stocks vaulting higher from here. A happy-smiles-all-around trade agreement with China and massive new QE (aka, an injection of $trillions of newly-created money).

How likely is a successful resolution to the current trade war, one that will please all sides? Hey, anything’s possible; but a lot of ink has been spilled over the past year explaining why the Chinese are not going to roll over lightly. And with the next US presidential election now just a year away, time puts increasing pressure on the Trump administration to blink first.

[Update: about 20 minutes after writing the above paragraph, markets dived deeply into the red in response to a new threat from the administration to de-list Chinese companies from US stock exchanges. This is not a sign that a happy agreement is anywhere close].

As for new QE, indeed it looks like the stage is being prepared for a return to net easing by the world’s central banks. Could that boost asset prices higher? Sure.

Would that be a “good” thing? Highly debatable. We are so deep into what used to be considered “emergency measures” to prop up the global economy that to any sane person, more QE should be looked at as a blatant admission that central planning has failed and that the world’s fiat currencies are in the process of being destroyed.

Bears need to ask the opposite: What’s not yet priced in that could topple asset prices from their current highs?

Being frank, it’s a lot easier to answer this question.

For starters, the macro outlook is grim and looking worse every week. As we’ve been tracking all year, the signs of an unfolding global recession are all around us. While the US is still seeing positive GDP growth, the weak earnings expectations cited above indicate that companies are beginning to feel the bite of the slowdown.

Sentiment is souring. A majority of both CFOs and the general public expect a recession within the next year. Major market trend reversals require a change in investor sentiment. After a decade of “everything is awesome!”, concern is starting to trump euphoria.

The darlings are falling out of favor. The FAANGs stocks have been responsible much of the appreciation of the major stock indices for years. Because of this, they are among the top holdings of a huge percentage of ETFs and mutual funds. Now that these once-bulletproof companies are issuing lackluster earnings (and revenues!), being fined for privacy abuses, coming under anti-trust scrutiny, and being chided and mocked by their own employees, their stocks are starting to look vulnerable. If investors refuse to continue accepting the sky-high valuation multiples these companies currently demand, the carnage will ripple across the markets. And the numerous Tech IPO disasters this year (Uber, Lyft, We Work, Fiverr, Slack, Pinterest, Chewy, Peloton) are only adding fuel to the fire.

The game has changed for oil. The recent drone strike on the world’s largest oil processing facility showed that the global oil supply chain is much more vulnerable than previously appreciated. The cost of defense is now hugely asymmetrical. Billions of dollars of supply can be disrupted with drone swarm technology that costs only thousands. So far, the world has shrugged of the implications of the attack, but as they become fully appreciated, a material “vulnerability premium” is going to be added atop the price of oil, making the cost of everything more expensive adding a drag to global trade.

Impeachment? This week the circus in Washington ramped into high gear with House Democrats initiating impeachment proceedings against the President. Regardless of their odds for success, this is a destabilizing event for markets (and the country). One that will become much more so should they actually succeed.

The technicals are blinking “danger”. The chart below shows an increasingly clear “head and shoulders” topping formation for the S&P 500 with numerous unfilled gaps below. Given this, it would not be surprising in the least to see 100 points quickly vaporize: 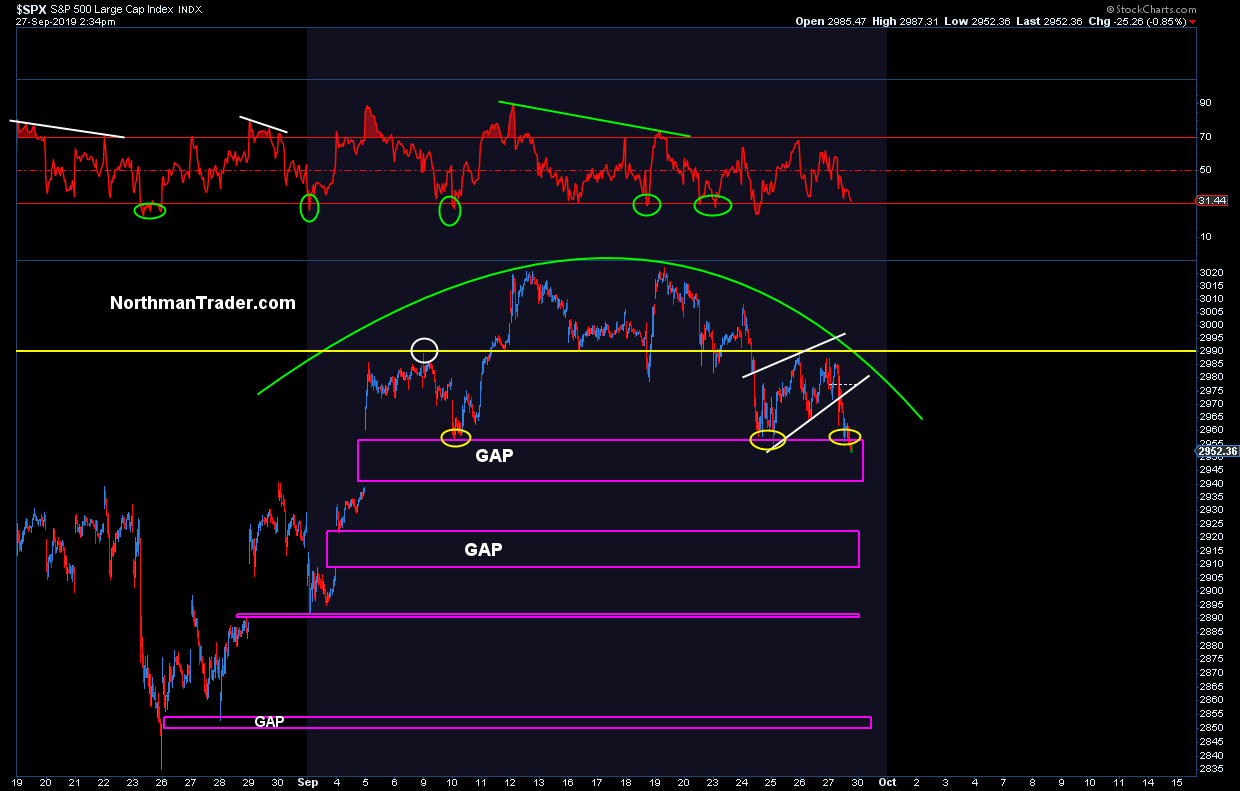 Personally, I find the logic underlying the bear case much more compelling.

Which is why I’ve moved a percentage of my “dry powder” cash savings into a new short position at this time, substantially larger than the one I placed back in March.

It’s not a move I take lightly (and as usual, this is NOT personal financial advice). I’m only doing it because, in my estimation, the preponderance of evidence for a near-term reversal is overwhelming my strong default risk-averse preference to sit on the sidelines.

In Part 2: Resuming The Crash Position I detail out the specifics of the new short position I’ve taken; which securities and why. I then revisit the wide range of options that investors skeptical of current market valuations can consider — for both protecting against a downturn and, for the more courageous, profiting from one.

We should know soon which way this market breaks. If it indeed breaks downward, make sure you’ve prepared in advance for it.