It’s hard to imagine a more euphoric end to the week for bulls.

Two weeks ago I issued a report titled Realistically, What’s Left To Power Asset Prices Higher? which claimed the bulls’ only hope was for a near-term resumption of QE (quantitative easing, aka “money printing”) or a China trade deal.

Well, this week they got both.

Jerome Powell announced Wednesday that the U.S. Federal Reserve will resume expanding its balance sheet to the tune of $60 billion per month. And just a few hours ago, the Trump administration announced it had reached a partial trade agreement with its Chinese counterparts.

And to put a cherry on top of things, word from across the Pond is that somehow a Brexit deal just might happen by the end of the month.

When I began typing this article earlier today, the markets were fiercely building towards an orgiastic climax. They ended with a slight post-coital breather, closing modestly off the day’s highs.

In short, the bulls are suddenly having the time of their lives.

So, does this mean happy days have returned? Have we been rescued from the rising tide of data warning of an economic slowdown and lower asset prices? Does the Fed — and now China, too — have our back again?

Is it time for investors to become optimistic once more?

Before we answer that, though, let’s address the elephant in the room. We no longer have functioning financial markets.

The central banking cartel has killed price discovery. The $15+ TRILLION in liquidity injected by the Fed, EBC, BoJ, BoE and PBoC over the past decade has ‘risen all boats’ when it comes to asset prices.

Whether great, mediocre, or horrible, the price of nearly every company/property/investment has been on a one-way 45-degree ramp upwards since global co-ordinated quantitative easing began in 2009.

And Wednesday’s announcement by the Fed simply shows that this game will continue, despite years of broken promises that it would instead ‘normalize’ (i.e., undo much of its past QE).

As a result, we live in a world where traditional price signals have become meaningless. Management turmoil? Missed earnings expectations? Regulators cracking down on your industry? None of it matters in a world of perpetual QE. As long as stimulus keeps flowing, everything heads in the same direction: UP.

All that matters is guessing what the small coterie of central bankers plan to do next. Will they tighten from here? Or ease? By how much? And for how long?

As a result, ‘investing’ is a dead science. Instead, we’ve all been forced to become speculators.

Seriously — and this is a topic deserving future lengthy exploration — those in favor of removing President Trump may have a better case to make for market manipulation as his impeachable offense.  He’s been shoving market prices around on a daily basis for years now. And how are his tweets this week — one of which instantly sent the Dow skyrocketing 300 points on Thursday — not considered in flagrante delicto examples of painting the tape? (a prohibited form of manipulation in which the criminal ‘creates activity or rumors to drive up the price of a stock’): 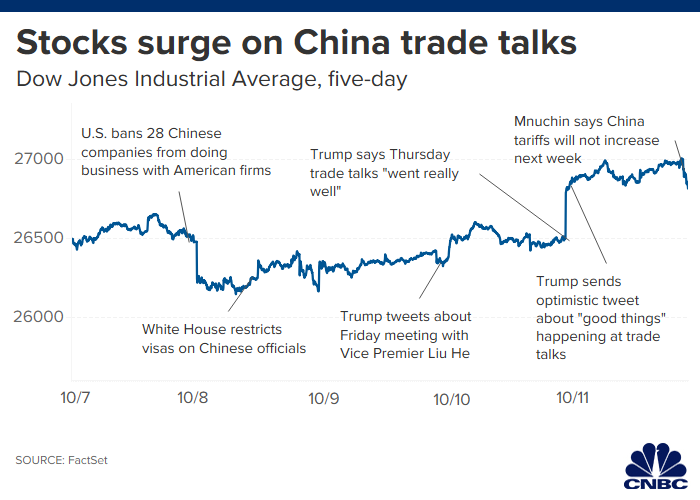 Time To Pile Back Into The Market?

But making the (safe) assumption no one in power cares about our broken markets as long as they benefit from the status quo, where are prices more likely to go from here?

Two weeks ago, I argued that the only things that would save the bulls in the near term was new QE and a China deal. Now that the past 48 hours delivered on both counts, the outlook for the rest of 2019 is now substantially more complex to forecast.

Nearly all of the negative indicators we’ve been warning about still remain. The macro outlook still screams recession risk, corporate earnings are still forecast to disappoint, geopolitical strains remain unresolved, and the world’s oil supply chain looks even more vulnerable given today’s news that an Iranian oil tanker was struck by missiles in the Red Sea.

That said, Powell’s new $60 billion per month QE program (which he swears isn’t really QE) will surely have a stimulative impact on the system. Even if those funds don’t make it out into the economy directly, they will keep both good and bad banks solvent and thus keep credit flowing. That will help in keeping today’s zombie companies/jobs/buyback programs alive for the foreseeable future.

As for the China trade deal, honestly, who knows at the moment? Technically, what was announced today isn’t officially an agreement. And what was “agreed” to by the parties were the less-sensitive issues on the table.

Bloomberg controlled most of the information flow about today’s trade news, and this is how its own staff economists summarize today’s “progress”. Not exactly breathless optimism:

What Our Economists Say

“Past experience is that U.S.–China trade agreements aren’t worth the paper they are written on, and this one hasn’t even been written down. For now, though, indications on trade are a little more positive. If that persists, it could help put a floor under sliding global growth.”

And the Chinese themselves are reacting with much more muted enthusiasm than our Tweeter-in-Chief. In fact, they aren’t yet willing to concede that any “deal” has been struck:

Long story short, we’re still a far distance from any formal compact that resolves the principal triggers that caused the US-China trade dispute. While today’s “news” may be a step in the right direction and help both parties save a little face, I think Sven Henrich summarizes it best in these twin tweets:

So did everything change this week?

Too early to tell.

But we highly caution against interpreting this week’s developments as a green light that it’s safe to jump back into the markets.

Powell’s Not-QE may do little more than slow the gangrene spread of recession within the US economy. Today’s China deal could quickly prove to be another “nothingburger” in a year-long process defined much more by disappointment than progress.

Note that despite their happy ride this week, markets are still closed below their all-time highs. So we still need to ask: What’s going to power them higher from here, now that they’ve gotten exactly what they wished for?

With new QE and an interim China agreement now priced in, what pressure remains to push stocks higher? Without a compelling answer, this weekend could very well mark the apex between “buy the rumor” and “sell the news”. If so, we could see a lot of disappointed bulls next week as today’s highs fail to stick.

We’re at an inflection point where the establishment is pulling out all the stops to keep the world’s longest economic expansion continuing and avert a market correction. It is pitted against the fundamental forces of reality, which want to eradicate the $trillions of bad debts and malinvestment that have built up in the system due to central planner intervention.

How much longer can the status quo protect itself from the repercussions of it past and present behavior?

While this great game plays out, asset prices will likely whipsaw before they make their next big move. Which is why we so strongly urge anyone with money at risk in today’s markets (in retirement funds, brokerage accounts, real estate, business investments, etc) to work with a financial advisor who understands the risks in play.

For better or worse, this is an exceptionally challenging time to navigate the financial markets. And this week’s developments have only increased the uncertainty of the trajectory that will win out from here.

Our counsel remains the same: Position for safety. Deploy hedges in your portfolio. And if you don’t feel confident in how to do this yourself, partner with an experienced professional advisor  — if you’re having trouble finding a good one, schedule a free consultation with New Harbor Financial, the firm we endorse.

So many plan to do this but end up not taking action until it’s too late. I recently asked New Harbor what is the most common issue they encounter when conducting a portfolio review, and they report — by far — it’s overexposure.

Most people they talk to a) don’t have a good understanding of all of the securities they own, and b) are currently “all in” with their portfolio allocations. This hasn’t really been an issue while the markets have powered higher year after year for the past decade. But it puts them unnecessarily at risk of painful losses when the inevitable next market correction happens.

I use the word “unnecessarily” because a short conversation and a few prudent decisions can mean a world of difference to how your financial wealth fares going forward.

Whatever you choose to do from here, just make sure it’s an intentional decision. These markets are just now too damn uncertain to leave your destiny to chance.