A good friend called me up in tears last week.  “My dad just tested positive for Covid and has symptoms, and now that we’re home from Christmas, my kids are sick now too. What should I do?”

After we discussed the usual and ordinary early treatment options – which are as numerous as they are effective – her anger then swelled. “I hate the bastards that did this to my kids!”

It’s now completely obvious that not only was this a lab-manufactured virus, but that various companies, government officials and prominent virologists across the world were up to their proverbial eyebrows in having a hand in this self-inflicted disaster.

Instead of exploring this with full-throated abandon, the majority of the press in the U.S., Canada, and Europe chose to downplay the lab-escape hypothesis and inquiry for as long as possible. Even when they did look into it, finally, their efforts were weak and soon dropped in favor of juicier “scariant” (scary variant) stories.

Why was that? Wouldn’t you think that the fourth estate press would be keenly interested in exploring the genesis of the most powerful story of this century? The one thing that not only impacted the lives of nearly everyone on the planet, but their own personal lives as well?

I certainly thought so. But I was relegated to mainstream pariah status (zero interviews or requests for clarification from the MSM) despite having gotten the lab-leak story pretty much exactly correct in the spring of 2020.

I go into all of this as a matter of providing yet another early warning.

The same institutional failures on display in the lab-leak coverup/disinterest are riddled throughout every other major institution upon which your very life depends. So many once-credible institutions have been revealed to be intellectually compromised or morally corrupt. Or both.

The CDC? Corrupt and nearly worthless. The FDA? Even more so. The Federal Reserve? Ditto. The same is equally true for the institutional counterparts in too many countries. Again, mainly in western leaning countries. Oddly and notably, not Japan, not Vietnam, Korea, Africa, India…and the list goes on and (suspiciously) on.

Leaving that uncomfortable observation and its many implications aside, my main point is this: the people ostensibly running the show have absolutely risen well above their levels of actual competence.  It may seem like they know what they are doing, but only because the media has completely failed to ask the proper questions and the legal system no longer holds powerful feet to the fire.

The future is therefore easy to foretell. If left unchecked, it’s going to suck. Much worse than it needs to.

It Doesn’t Have To Be This Way

The Federal Reserve is busy making it up as it goes along, printing and then printing more. It’s easy. Nobody complains. Later the Mother of All Bubbles blows up and everybody gets hosed. It’s entirely predictable and avoidable.

Science and medicine become corrupted by rules and incentives that promote money over health and outcomes.

What’s required to turn all this around is for good people to once again rise up and say, “No More!” If we do, we can actually and truly turn all of this around. If we don’t, we will absolutely get what all of us can see coming.

The backdrop to this is that there’s an agenda running. When we clear our minds and hearts, we know that public health has not been anywhere near the top of the lists for any of the conflicted public health authorities in nearly all of the western countries.

These governments still do not promote vitamin D for all their citizens as a generalized immune boosting supplement offering enormous protective benefits against Covid (and many other illnesses). Why not?

These governments have gone to great lengths to block and even intercept Ivermectin shipments to their citizens despite clear signals that it is both very effective and incredibly safe. Why is that?

Well, we can’t know all the actual reasons why, because speculation as to intent is involved, but we can say for sure that these things have been happening. And that every time the CDC elevates a report or promotes a statistic each is invariably supportive of the central policy narrative of the moment. Every. Single. Time.

Once is an accident, twice is coincidence, but three times is enemy action.

If you needed any more convincing, consider this recent jaw-dropping headline:

Some math: 25% of all yearly deaths happen in the 18-64 category, and there are 3 million total yearly deaths in the US. That means the usual 750,000 deaths in this category ballooned to 1.05 million which means an extra 300,000 people died in this category in the U.S. This is a ball-park estimate because we are extrapolating this one insurer’s findings to the whole population, but directionally it is correct.

Is the CDC all over this explosive finding? Not as far as I can tell. I am unaware of any interest at all. Is the press on the job? No, not the mainstream press. As of this writing, that news has been out for two full days and not a single article has been written in a large mainstream news “source.”

The news is full of hospitals being full, but are they full of these 18–64-year-old victims who haven’t died but experienced some other mysterious ailment that began for some reason in the last year? People who are there maybe “with” Omicron but not there because of Covid?

These would be simple enough questions to answer with some honest inquiry. Inquiry that you and I both know isn’t going to happen.

At the very least, we should be asking ourselves – “why am I just hearing about this now, a year after the fact, from a life insurance company and not the CDC?  I thought they were responsible for tracking such things?” They are responsible, and they’re not doing it. Again, why not? In whose service are they, exactly, and what are their aims?

You know what? It doesn’t matter. Why? Because the very demonstration of such a level of complete rot tells us all we need to know. Those in power have completely lost the plot. The ship has no captain, and there are reefs ahead boiling with large waves.

It didn’t have to be this way.  But it is, and we have to deal with it as best we can.

Darker Before it Gets Brighter

Those of us with access to data know that Covid is terrible for people over the age of 70, but has an IFR equal to or less than the flu for those under 60. Yet that information has been squished and tortured to misrepresent the threat as if it applied equally to all people of all ages and all comorbidities. In other words, Covid has merely been an excuse to advance a larger agenda. If you are nodding your head in agreement, keep reading. If you are shaking your head side to side, I’m surprised you made it this far.

The same systemic corruption and institutional myopia that has infected the CDC and FDA is rampant within the SEC, the Federal Reserve, and many of our formerly respectable universities and colleges.

Which means it’s going to get darker before it gets brighter. How dark? It’s hard to say but the range I hold in my mind spans from “this is going to hurt” all the way to “it’s going to be the worst decline since the Romans pulled out of Europe.”

That agenda of totalitarian control – once a mere fantasy plot line for fictional movies and books – is now a very obvious aim of many in power. Their seeming naivete about the positive roles of freedom, rights, and private initiative in the development of our shared prosperity is quite alarming, frankly. They seem to know nothing of the role of incentives in shaping behavior or about the complexity of economic systems. They didn’t even appreciate that maybe humans shouldn’t cavalierly monkey about with virus genetics, so how could they possibly care about other more mundane issues like the over-printing of money?

In such a period of crisis it’s reasonable to propose that everybody will lose, and some will lose more than others. The bear market that comes will only prove to be a net positive for very few nimble, lucky people. For the rest, the maxim of “s/he who loses least gains the most” will apply. This is why I focus on building many forms of capital. If one fails, you have the others. That’s true diversification.

Once the darkness bottoms out, then the rebuilding begins. Those who have resources and community and their spirits about them will be those who do the rebuilding. Those days are coming, but first things get harder. This is why we gather. 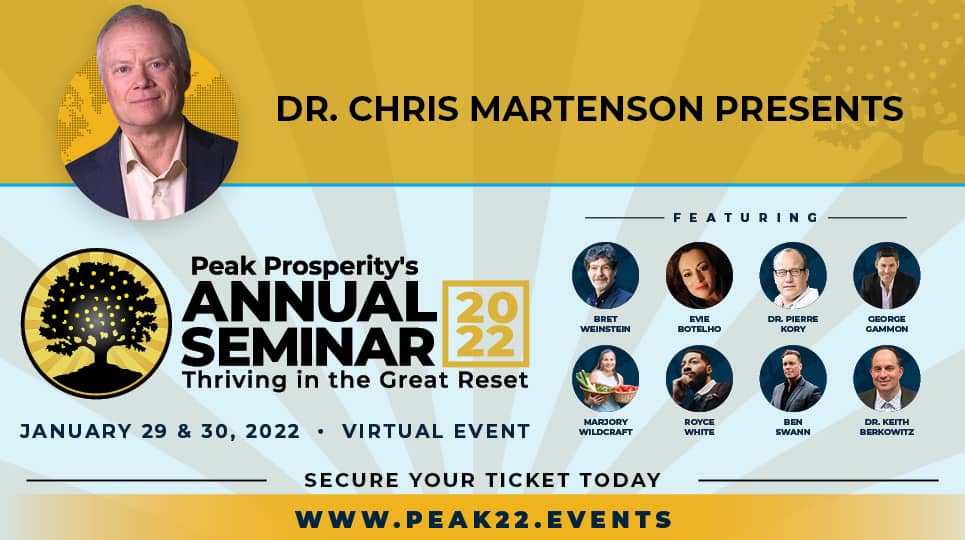 One of the signature highlights of any Peak Prosperity live seminar we hold are the breaks. The volume of conversation is jacked up. It’s loud and animated and full of energy. Calling the breaks to an end always seems a shame.

This year we’re holding a virtual seminar designed specifically to create as many opportunities for these sorts of interpersonal interactions as is possible. Our “digital pavilions” will be there for people to gather by topic, by region, by speaker or any other identified interest grouping. And they will be open for a full week (maybe longer if that’s what people wish).

The cons of this are that there’s nothing quite like meeting real people face-to-face. It’s impossible to replicate that with today’s technology. Maybe soon there will be a virtual solution that gets closer. I think that’s coming.

The pros of this approach are that it’s vastly cheaper in terms of time and money for people to gather virtually. We can reach people from all over the world.

And this is our mission. To raise our hands high and say, “This is where the conversations that need to happen are happening! Please come and join us.”

If you feel, as I do, that the troubles have only just begun, and that it’s important to be among “your people” during such times, then this seminar is designed specifically for you.

It’s time. Time for us to gather, to reflect, and to plan. It’s time to withdraw our consent from a system that no longer deserves our obedience.  However, you do that, know that you have my backing and support.

The future is going to be dark. For a while. And then things will get better, they always do, but never before good-hearted people set aside their lives in pursuit of the larger aims.

History is clear on the matter. Power never gives up its gains willingly.

~ Attributed to Lord Acton (who borrowed it)

We live in a time of such corruption, and the worst of it is not simply that these are bad people who would do just about anything for more money, control and power, it’s that they are too recklessly devoted to their own small aims.

Their lack of understanding of the importance of faith, beauty, and integrity is appalling and uninspiring.  Their overconfidence is downright concerning.

So, it’s time to prepare. More fully, and with more focus and determination than you’ve brought to it so far. You are not just preparing for your own family, but for many others besides. You are preparing to play a large role in how the future of your community turns out and by extension how the future turns out.

Ultimately, this will prove to be a period of great disruption and equally great empowerment for those who chose to rise to the occasion.

Find your tribe. Make plans. Stock up. Winter is coming.