Have you moved a material percentage of your financial portfolio to cash? Have you become so concerned about the meteoric ramp upwards in asset prices that you find it wiser instead to move to the sidelines, build "dry powder", and wait to re-enter the markets at saner valuations?

If so, you have my sympathies.

The past 5+ years have been brutal for savers pursuing this strategy. I know this well, as I'm one of those folks, too.

The Mother Of All Financial Bubbles

As we've chronicled for years here at PeakProsperity.com, the global central banking cartel started flooding the world with liquidity (aka, money printed from thin air) in response to the arrival of the Great Financial Crisis in late 2008. And they never stopped.

The chart below shows how the combined balance sheets of the major world central banks (Fed, ECB & BOJ) are 3.5x higher today than their pre-crisis levels less than a decade ago. (And if we included the PBOC in this chart, the cumulative total would be 18.8 Trillion!): 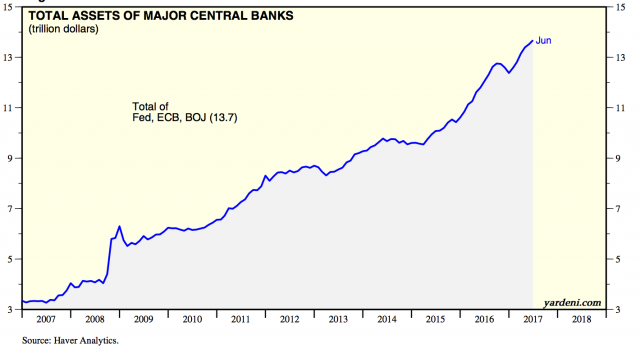 All that liquidity has to go somewhere. And, as hoped by the central banking cartel, it has found its way into the financial markets, pushing the price of nearly every asset class to record extremes. And then higher still.

Equities have shot the moon, and are now nearly twice as high as they were at the apex of the past two stock market bubbles, as this below chart of the S&P 500 shows (in fact, the S&P price/revenue ratio just hit the highest level in history, aside from the week of the March 2000 bubble peak): 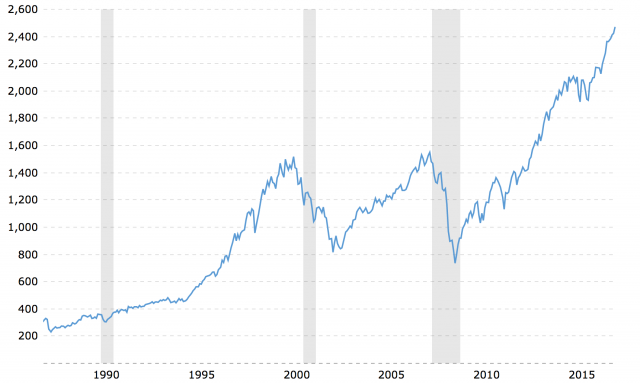 And home prices have returned back to the same level seen right before the last housing bubble viciously burst (in many high-demand markets, home prices are well in excess of those 2007 highs): 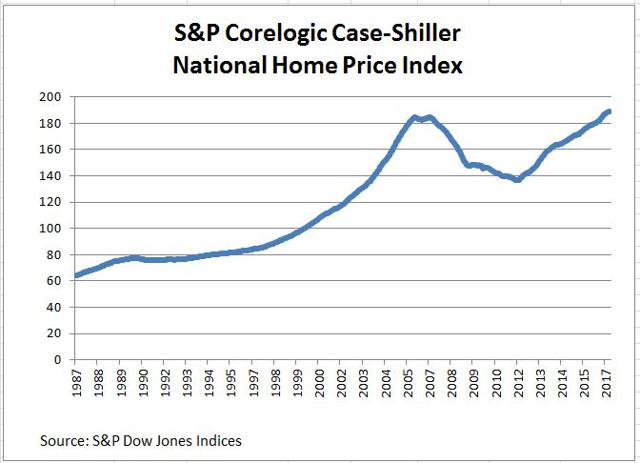 We've written numerous articles about the dangers of the current central banking policies responsible for today's nosebleed asset prices. But the gist is this: we are currently living within the mother of all financial bubbles. These prices are in no way sustainable.

Why not? While the reasons are legion (and we've spilled plenty of ink writing about them all), the big reason is revealed in this chart: To support the current level of asset prices, we have been growing our debts more than twice as fast as our national income (GDP). Any household knows that you can't do this for long before insolvency occurs. Nations — even those with a printing press — can't escape this same fate in the long run.

See that little wiggle in the debt line from 2008-2009? That's the wiggle that almost destroyed the world during the Great Financial Crisis. Look at those asset price charts above again. See how much higher we are today than we were back in 2008?

So… are you one of those people wondering how much more painful the next downturn will be, when we fall from even loftier heights this time? Are you one of the few folks who haven't already forgotten that the S&P declined over 50% in the short time between the end of 2007 and the beginning of 2009?

If you are, and you've decided not to participate in today's Ponzi scheme markets and instead build cash, it's been a painful ride watching the prices of nearly every other asset vault higher year-over-year while your cash pile simply sits there.

And if the feeling of "missing the rally" isn't bad enough with the mainstream media and your brother-in-law constantly rubbing your nose in it, there's a host of new threats besieging cash these days.

The All-Out War On Savers (aka Financial Repression)

Again, as we've written about often here at PeakProsperity.com, those running today's economy are doing their utmost to keep prudent savers like you from keeping your cash safely on the sidelines. They desperately want your savings pushed out into the economy so that their over-leveraged casino can continue operating a little bit longer.

The key elements of Financial Repression are:

So, with the reckless investors all around us gloating at their returns, with our banks paying us nearly 0.0% on our savings and treating us like criminals if we have the temerity to ask for access to it, and with the government talking about taking it all from us eventually anyways (replacing with Fedcoin, perhaps?) — is it time for us cash savings holders to throw in the towel?

We have to remember that we are living through a massive bubble market that has no precedent in history. Bubble markets are nefarious, as they prey on our mind's hard-wired greed/fear drivers. It is very easy for us be manipulated into thinking "it's different this time". Even the genius Isaac Newton fell victim to the mania of the South Sea Bubble:

John Hussman has done perhaps more work than anyone else demonstrating that today's elevated market pricing is due to pulling future value into today (through debt), and that the BEST investors can hope for going forward is a decade of 0% gains: 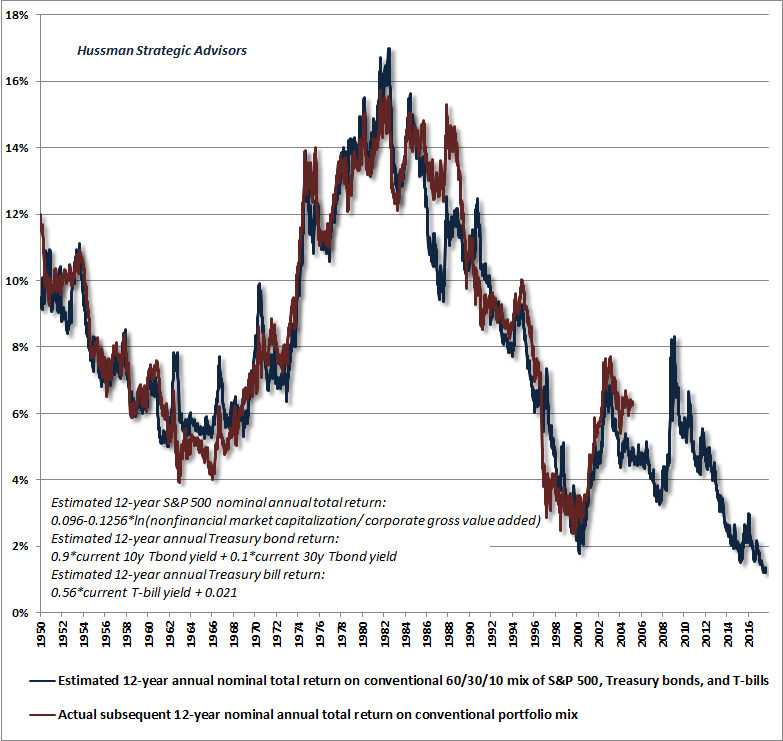 But I think his real masterwork is his very succinct summary of the situation we are all in at this moment in history:

The problem with bubbles is that they force one to decide whether to look like an idiot before the peak, or an idiot after the peak.

2008 is not so far in the past that we can't clearly remember the panic in people's eyes as they watched their retirement portfolios and home prices get cut in half within a matter of months. That's what looking like an idiot after the peak feels like.

When that happens, those who decided to look like an idiot early on and refuse to join the party (i.e., positioning their capital defensively), are going to look like geniuses. They will avoid the heartbreak of loss, and they will have capital to deploy when the dust settles, purchasing quality assets at (potentially historic) bargain prices.

It's not an easy choice to make, or to remain steadfast in. It takes foresight, courage, and resolve. But it's a smart choice.

Of course, cash savings is just one of a number of options for positioning your financial wealth defensively right now. For those looking to learn more about other ways to do so, we recommend the following progression:

It's unknowable exactly how much longer our unsustainable markets can remain at their record levels. But there is one thing we know for certain: we're closer to their day of reckoning than we've been at any point over the past seven years. A recession is due soon by historical standards, and long overdue by fundamental ones.

When it happens, do you want to look like an idiot? Or would you rather choose to look like one now, so that you can look brilliant then?