Currently the media is breathlessly cheering the record amounts of US oil production. Stories like this one get top billing on major news websites:

It's a big achievement that highlights a surge in US oil exports, and that shows how the shale boom can make America less reliant on foreign oil.

"It's a definite milestone. Nobody saw this coming 10 years ago," said Bob McNally, president of consulting firm Rapidan Energy Group and a former energy official under President George W. Bush. "It's an unambiguously good thing. It diversifies our dependence from the volatile Middle East."

Texas is the epicenter of the shale revolution, with soaring production in the oil-rich Permian Basin leading the United States to record output. Rapid technological advances in fracking, the process of unlocking oil and gas deep underground, have dramatically reduced the cost to drill oil in the Permian Basin.

Texas is now on track to produce more oil than either Iran or Iraq. That would make Texas No. 3 in the world if it were a country.

Sounds pretty wonderful, right? Technology advances in the fracking process have enabled the "shale miracle", resulting in the US producing over 10 million barrels per day for the first time since the 1970s. Think of all the incremental GDP growth that excess oil will power!

If these trends continue, CNN goes on to tell us, the US will become an net energy exporter soon:

US on track to become net energy exporter

The United States still relies on foreign oil — but not as much.

OK, let's take a moment to conduct a little reality-check of the hype.

First off, notice how the CNN article above mentions that the US is still importing 7.8 million barrels per day. That's not much less that the record levels we're currently extracting from our own soil. So domestic oil production would have to nearly double from here to turn the US into a net oil exporter. Translation: we're not weaning ourselves off of foreign oil anytime soon, under the best of conditions.

Next, a key assumption the shale cheerleaders are making is that current output trends will continue. That shale basins like the Permian will yield increasing volumes of crude from here well into the future.

Oil extraction from a conventional well over time follows a bell curve (left), where it takes roughly as many years as it did to the hit the apex of production as it does for the well to peter out. Shale wells on the other hand, deplete on a hyberbolic curve (right). Roughly 80% of a shale well's total output is exausted by the end of Year 2(!):

So to increase production from a shale basin, you have to drill more and more wells to overcompensate for this rapid decline of each individual well.

This is referred to as the Red Queen syndrome, where eventually you're having to drill more and more aggressively just to maintain a constant (i.e. flat) level of output:

An even bigger problem with this approach is that shale basins are not infinite. Eventually, they deplete. You run out of well sites to drill.

And well quality within a basin tends to degrade over time. Humans being humans, we tend to pursure the best well prospects first, and then move on to lower and lower-grade prospects as the better wells dry up.

In fact, production for most major US shale basins like the Bakken and Eagle Ford declined substantially from their peaks in 2015 to the beginning of this year. They've both seen a resurgence in output over 2018 as oil has risen to the $70 per barrel range — though the big question is: How long can this new surge last?

It's also important to keep in mind that estimates of how much oil in these basins is actually economically recoverable are not rock-solid. Over the past decade, estimates for several large shale basins have been drastically reduced once better data started coming in from oil explorers. The Utica play is a good examples of this — but none is more extreme than the Monterrey basin, which was reduced overnight in 2014 by a whopping 96%:

Federal energy authorities have slashed by 96% the estimated amount of recoverable oil buried in California's vast Monterey Shale deposits, deflating its potential as a national "black gold mine" of petroleum.

Just 600 million barrels of oil can be extracted with existing technology, far below the 13.7 billion barrels once thought recoverable from the jumbled layers of subterranean rock spread across much of Central California, the U.S. Energy Information Administration said.

The Monterey Shale formation contains about two-thirds of the nation's shale oil reserves. It had been seen as an enormous bonanza, reducing the nation's need for foreign oil imports through the use of the latest in extraction techniques, including acid treatments, horizontal drilling and fracking.

The energy agency said the earlier estimate of recoverable oil, issued in 2011 by an independent firm under contract with the government, broadly assumed that deposits in the Monterey Shale formation were as easily recoverable as those found in shale formations elsewhere.

The estimate touched off a speculation boom among oil companies. The new findings seem certain to dampen that enthusiasm.

Take that in for a moment. Two thirds of the US shale oil reserves suddently declared essentially useless/unobtainable.

OK, so why does this matter?

Because Energy is essential to the Economy. It powers economic activity.

There's a plethora of charts out there showing this 1:1 correlation between energy expended (Mtep/Mbtus) and economic growth (GDP). Here's just one:

So, as energy goes, so goes the economy.

As we've covered in great depth on this website and in The Crash Course video series, the world remains addicted to liquid fuels and nearly all of those today are fossil-based. Even under the best case scenarios, the world will continue to be fossil-fuel dependent for decades to come.

Looking at projections for world liquid fuel demand, we see demand continuing to grow substantially, as shown this chart from ExxonMobile's 2018 Outlook for Energy: A View to 2040 report: 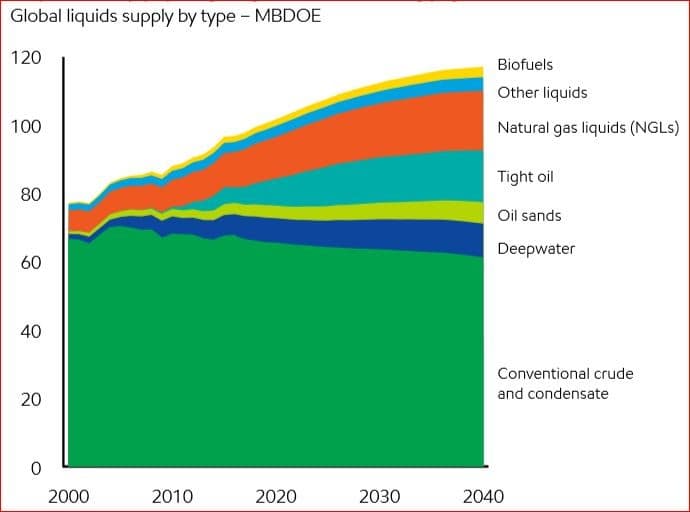 Now, remember above. The shale plays deplete MUCH faster than conventional fields and we've already gone after the richest basin deposits. A big question to answer is: Can we really count on the shale industry to provide this much new oil for this long?

Petroleum geologists like Art Berman don't think so. He sees the current spike in shale output as a relatively short-term event, a pleasant windfall that will exhaust itself much faster than most realize. He refers to the current bonanza as not a new dawn for US oil production, but as its 'retirement party'

We're also cautioned not to put too much faith in the conventional oil supply projections, as the industry is notorious for over-estimating remaining deposits. This chart, referred to as the "hedgehog" chart by oil analysts, shows how nearly every year, the IEA has been forced to downgrade its previous production projections for conventional oil: 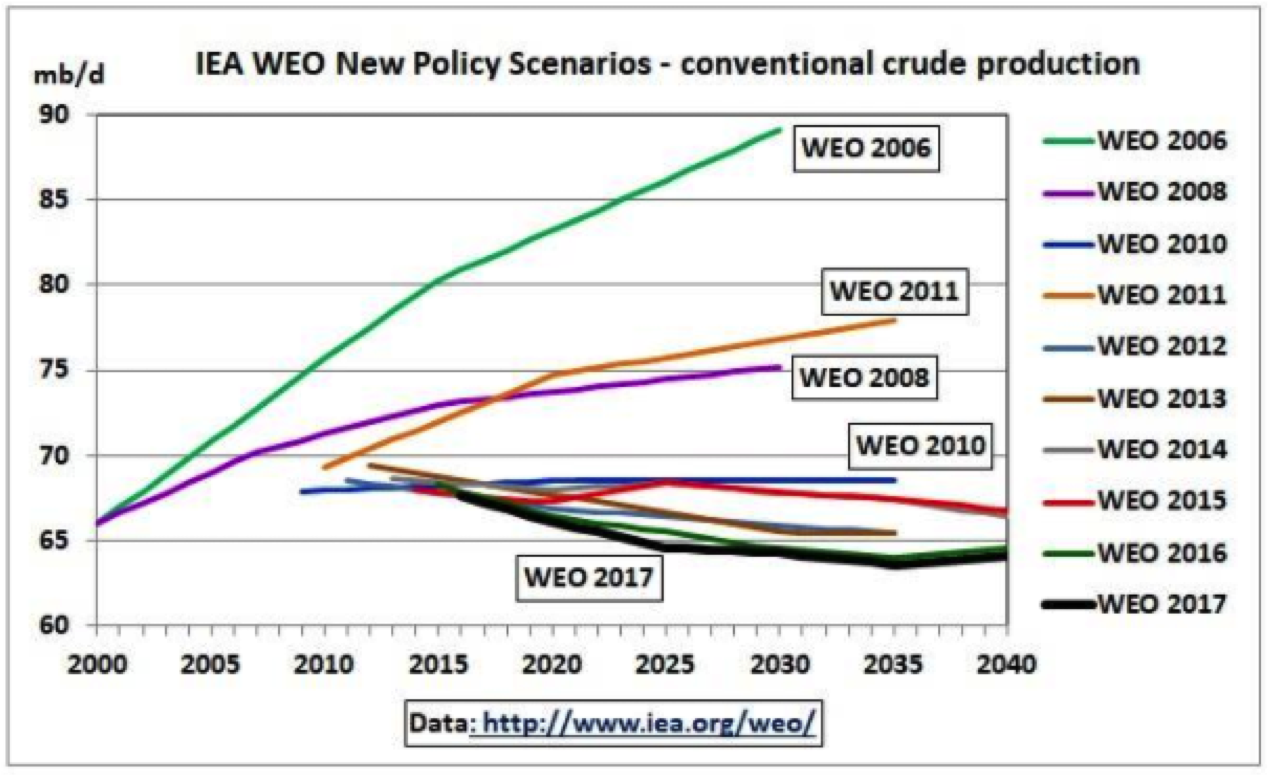 So, the existing fields may deplete faster than we think AND there may be less economically recoverable supply than we currently forecast.

Furthermore, a lot of investment is required to get all of this future liquid fuel out of the ground and to market. The chart below (from the same ExxonMobile study) shows that roughly 80% of the supply from today's current wells will be gone in the next 20 years. 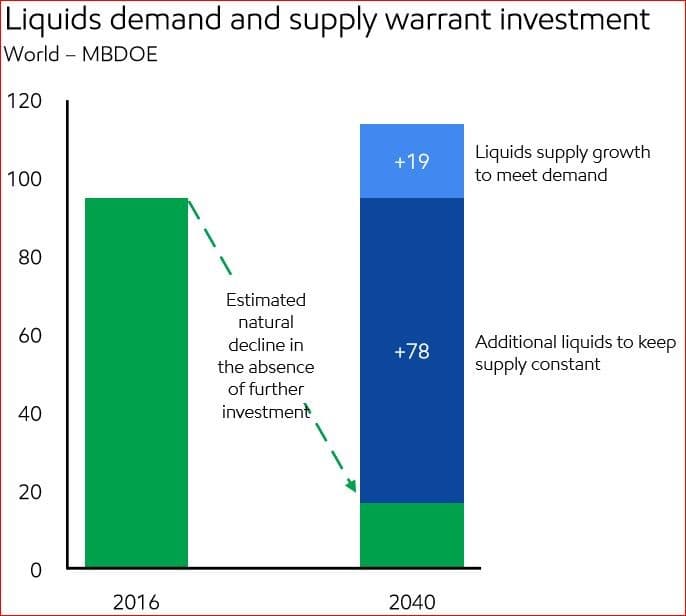 With the shale oil producers losing money every year for the past decade, with oil producers underinvesting in capex for much of that time, and the risk of global recession(s) returning, will the full investments necessary to meet world liquid fuel demand actually be made?

What If There Isn't Enough Energy To Meet World Demand?

What if future oil supply comes up short? Either from lack of investment, or faster-than-expected depletion of the shale plays (and/or the conventional ones), or whatever.

For a world addicted to liquid fossil fuels, what would the ramifications be?

Transportation specialist Alice Friedemann has made a career of warning of how bad things could get, depending on the swiftness and severity of a liquid fuels emergency.

Best known for her book, When Trucks Stop Running, here's her forecast of what would happen should our trucking system shut down for lack of fuel:

This is just a partial list of what would occur.

Where Are We In The Energy Story?

So Friedemann certainly paints a frightening picture of how bad things *could* get. How likely is it to get that bad?

Where are we in the energy story? Are we flirting with disaster, or are things closer to the rosy outlook we read about in the media?

These are important questions. Depending on the answers to them, very different actions need to be taken. So it's important to get as clear a picture as possible of what the likeliest developments from here are, and then determine your best path to prepare.

Which is why we're hosting our webinar, The Energy Predicament, this Sunday, August 26 at 4pm ET. It will feature Art Berman, Alice Friedemann, along with oil & gas well operator Bob Burr — to provide both analytical as well as boots-on-the-ground perspective.

If you agree this is an important topic to educate yourself on, learn more about the webinar by clicking here.

The live version of this webinar took place on Aug 26, 2018. It was excellent.