Investigative journalist Bethany McLean is an expert on crisis.

She has written New York Times best-selling books on the collapse of Enron (The Smartest Guys In The Room) as well as the mortgage industry and Wall Street abuses that led to the 2008 Great Financial Crisis (All The Devils Are Here and Shaky Ground).

Soon, all of Adam’s interviews with top experts on money & the markets will run exclusively on that channel.

Looking at the accelerating expansion of debt issuance, the red-hot run-up in the financial markets, and the economic uncertainty caused by the ongoing pandemic — Bethany concludes we’re at a precarious never-been-here-before moment in history, aka “uncharted territory”. And she sees good probability another major crisis may be around the corner.

She also sees a familiar dangerous lack of imagination in those both running and cheerleading the current system. Similar to the ‘rock stars’ at Enron, no one seems able to entertain the idea that things could get out of hand much faster than folks are prepared for.

Once glance at the current level of investor euphoria confirms this: 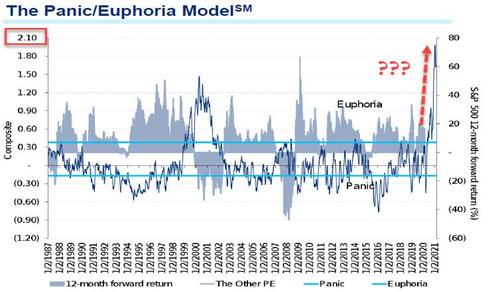 We’re farther from the historical average than we have ever been on this measure — as well as on so many other metrics we don’t have room to list them all here. We are truly in uncharted territory.

Which is why Bethany agrees that now, more than ever, is the time to partner with a financial advisor who understands the nature of the market risks in play as well as the opportunities, can craft an appropriate portfolio strategy for you given your needs, and apply sound risk management protection where appropriate:

Anyone interested in scheduling a free consultation and portfolio review with Mike Preston and John Llodra and their team at New Harbor Financial can do so by clicking here.

And if you’re one of the many readers brand new to Peak Prosperity over the past few months, we strongly urge you get your financial situation in order in parallel with your ongoing physical resilience preparations.