Continuing the tradition of "telling it like it is," in stark contrast
to US news where everything is soft pedaled and downplayed, Spiegel
(one of my favorite foreign news sources) comes out with this
astonishing article.

This quote below does a fantastic job of summing up the situation.

For some time, there has been a tacit agreement among central bankers
and the financial ministers of key economies not to allow any bank
large enough to jeopardize the system to go under — no matter what the
cost. But, on Sunday, the question arose whether this agreement should
be formalized and made public. The central bankers decided against the
idea, reasoning that it would practically be an invitation to
speculators and large hedge funds to take advantage of this government
guarantee.

Everyone involved knows how explosive the agreement is. It
essentially means that while the profits of banks are privatized,
society bears the cost of their losses. In a world in which the rich
are getting richer and the poor poorer, that is political dynamite.

Nevertheless, central bankers are running out of options. They are
anxious to avert the nightmare scenario of a financial crisis like the
one that rocked Germany in 1931, when the failure of a major Berlin
bank prompted a massive run on other banks by a nervous public, which
plunged those banks into insolvency. For decades, a repetition of that
disaster had seemed unthinkable. But ever since former Fed Chairman
Alan Greenspan dubbed the current financial crisis the worst since the
end of World War II, old certainties have no longer applied.

For those who are paying attention, this open
admission that our choices are seemingly reduced to either a systemic
market crash OR shoveling untold amounts of money into the coffers of
the wealthiest banks and individuals on the planet reveals just how
ridiculous, and potentially explosive, this situation really is.

Let’s continue. This is a telling passage and quote:

In this situation, even the most zealous disciples of the free market
are calling for more government intervention. "I no longer have faith
in the ability of the markets to heal themselves," Deutsche Bank CEO
Josef Ackermann confessed in a speech delivered last Monday in
Frankfurt.

Ackermann said that the American example shows that governments and
central banks must now play a stronger role.
Even his counterpart at Commerzbank, Klaus-Peter Müller, agreed, saying
that the current situation has the potential to develop into "the
biggest financial crisis in postwar history" as long as "the markets
are allowed to continue operating unchecked."

According to Müller, "It would make sense to permit the banks —
retroactively to Jan. 1 — to account for securities differently by
eliminating the daily revaluation requirement." He argues that this
would stop the downward spiral on the banks’ financial statements.


As someone who has been observing this
"sudden crisis" develop over the past 4 years, I am amused by this
sentiment that "banks be permitted some additional leeway in how they
treat and record their losses" so as to continue to hide these poor
results.

The reason I find this (somewhat) amusing is that the Central Banks
have known about this problem for a long time, yet chose to do
absolutely nothing about it until now. Let me illustrate this, first
with a quote from a Federal Reserve governor from 2006 revealing that
they were precisely focused on the potential for the exact sort of a
crisis, and then with a graph showing what happened between 2006 and
2008.

“There are aspects of the latest changes in financial innovation that
could increase systemic risk" — the danger that the losses of a few
investors could set off a chain reaction of events that disrupts the
broader financial system, as did the near-collapse of a heavily
leveraged hedge fund in 1998.”
Federal Reserve governor Timothy Geithner March 1st, 2006

The "aspects of financial innovation" are derivatives that have now
‘blown up’ and which Klaus-Peter Müller, above, is arguing should be
more-or-less swept under the rug. The "systemic risk" is precisely the
situation we now find ourselves in, with the possibility of bank after
bank toppling into one another like so many unstable dominoes until the
whole banking system simply ceases to function.

Given the seriousness of this possibility, and given that the US
central bank is on record as being very concerned about this back in
2006, let’s see what happened to the growth in derivatives after that
moment. Did the central banks crack down on them limiting their growth?
Did the number and amount of derivatives decline? 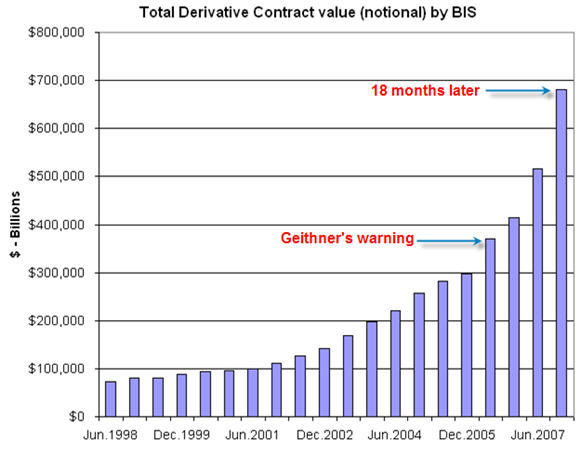 What we see here is that at the moment of
Geithner’s warning (which I took very seriously at the time), total
world derivatives had a value of around $380 trillion (with a "t"), and
18 months later that number had exploded to $684 trillion. So, however
concerned the central banks were at the time, they were not concerned
enough to prevent a near doubling of derivatives over the next year and
a half.

Are you OK with that?

As
we head into the economic abyss (as the AP put it) and the Fed goes
where it’s never gone before (as BusinessWeek put it), we have to ask
ourselves, what are the next shoes to drop? Here I’ve located what I
think are the next two most likely shoes to drop.

Into the Economic Abyss

Understanding how things got so bad means rewinding to the start of the
housing boom. Wall Street and the banks made it far easier for people
with shaky credit to get a mortgage — known as a subprime loan.

[snip]
"This problem begins with the fact that we underwrote mortgages
sloppily, which means no one really knows what those assets are worth,"
said Lyle Gramley, a former Federal Reserve governor and now an analyst
with Stanford Financial Group. "That makes bankers very leery, and has
resulted in a significant contraction in the availability of credit."

[snip]
"I think the current financial crisis looks to me like the worst one
since we got into the Depression," says Richard Sylla, who teaches the
history of financial institutions at New York University’s Stern School
of Business.


A pretty interesting article from the AP, which is,
in my opinion, among the worst (best?) at sugar-coating and downplaying
the risks to the economy.

Where No Fed Has Gone Before


The Federal Reserve has stretched its mandate up, down, and sideways to
prevent a financial market deluge. Now it appears to be stretching the
English language a bit as well. What the Fed is calling a $29 billion
"loan" to help finance JPMorgan Chase’s (JPM) purchase of Bear Stearns
(BSC) looks much more like a $29 billion investment in securities owned
by Bear. Although the Fed insists that it isn’t technically buying any
assets, in practical terms it’s doing exactly that. All this adds up to
a big and unacknowledged step up in the central bank’s financial
intervention with Wall Street investment banks.

So the Fed got creative. It set up an arcane arrangement that will give
JPMorgan the full appraised value for some of Bear’s assets if JPMorgan
succeeds in acquiring Bear.

Here’s how it works: A Delaware-based limited liability company will be
set up to receive, upon completion of the merger, $30 billion in
various Bear holdings, such as mortgage-backed securities. The Fed will
lend $29 billion to that company, which will pass all the money along
to JPMorgan, Bear’s new owner. JPMorgan itself will lend $1 billion to
the Delaware company. The company, managed by BlackRock Financial
Management, will pay back the loans by gradually liquidating the
assets. As a protection for the Fed, it gets paid back fully before
JPMorgan gets back anything on its loan. The other sweetener for the
Fed is that if there’s money left over even after JPMorgan gets repaid,
the Fed gets it all.

Well, isn’t that interesting? I wondered how that $30 billion from the
Fed got ‘injected’ in the BSC deal. In a cartoon-like fashion, I
imagined that the Fed just wired the money over. Instead, they (very
rapidly) created a separate holding corporation to receive both assets
and liabilities and found a third party to run it. Nice work for a
single weekend!

However, this tells us something very important: The Fed does not
actually want to hold any of the truly rotten garbage in its own
portfolio. This means the Fed is seeking to insulate itself. What does
this tell us? Even the Fed does not have confidence in these assets,
and the Fed is *not* willing to risk it all on this, or any other,
rescue attempt.

Equity Loans as Next Round in Credit Crisis


Little by little, millions of Americans surrendered equity in their
homes in recent years. Lulled by good times, they borrowed — sometimes
heavily — against the roofs over their heads.
Now the bill is coming due. As the housing market spirals downward,
home equity loans, which turn home sweet home into cash sweet cash, are
becoming the next flash point in the mortgage crisis. Americans owe a
staggering $1.1 trillion on home equity loans — and banks are
increasingly worried they may not get some of that money back.

The next shoe to drop. Too bad our economy looks like a tree festooned with the contents of Imelda Marcos’ closet right now.


NEW YORK (Reuters) – Big Mid-Atlantic banks face
more losses from the real estate slump, according to a report on Monday
from a regional Federal Reserve that suggests the worst has not passed
for the beleaguered banking sector.

Prospects of an ever-growing stockpile of bad loans on homes,
office buildings and shopping malls will likely force banks to seek
additional capital and/or to put aside more money to cover further
losses, the Philadelphia Federal Reserve said.

While the latest study focused on banks the regional Fed oversees
in three Mid-Atlantic states — Pennsylvania, New Jersey and Delaware,
many of them do business across the country.

Financial conditions at these large Mid-Atlantic banks worsened
across the board in the last quarter of 2007, deteriorating to their
weakest levels in 15 years by some measures, the Philadelphia Fed said.

The next, next shoe to drop. I wrote about
this prospect about a year ago. The key here is to understand that it
is primarily the mid-sized and regional banks that do the bulk of the
Commercial & Industrial loaning. Which means they are the most
heavily exposed to losses that might result from, oh, say, defaults by
the developers of the ill-advised mall built on the outskirts near the
empty, overpriced and unsold houses on the edge of town.


If these losses are in the hundreds of billions (likely), then, statistically speaking, it is possible that nearly all of the capital of the mid-sized regional banks will be wiped out.

This is why I constantly caution you to pick your bank very
carefully, and, even then, to keep your eye firmly focused on how your
bank is doing.