The release of the July unemployment report was filled with a wide array of distortions and inexplicable results (especially from the Birth-Death model), which have undoubtedly resulted in a better-than-warranted reported gain. In this post we’ll explore these oddities in some detail.

WASHINGTON (Reuters) – U.S. employers cut 247,000 jobs in July, far less than expected and the least in any month since last August, according to a government report on Friday that provided the clearest evidence yet that the economy was turning around.

With fewer workers being laid off, the unemployment rate eased to 9.4 percent in July from 9.5 percent the prior month, the Labor Department said, the first time the jobless rate had fallen since April 2008.

Wait, how can you lose jobs and have the rate of unemployment fall? This doesn’t make sense, because it is the equivalent of saying, "I spent more than I earned and my savings went up."  The key here is understanding the ways in which the government measures unemployment.

As always, the devil is in the details. Without the Birth-Death model providing the largest addition of jobs in its entire series for July, the 247,000 jobs lost number would have been higher.

The table below shows the contributions or subtraction of jobs provided by the Birth-Death model in each month of July since its creation.  This July sports the highest addition ever: 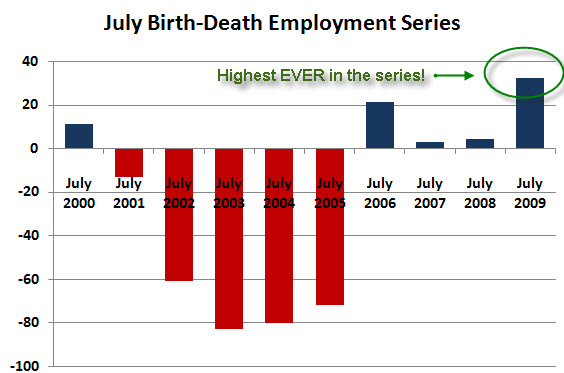 Normally, July and January are "true-up" months, where all the past overstatements of the Birth-Death model are cleaned up.

Does it make sense to you that this July, out of all months, the Birth-Death model should be showing the largest monthly gain in the series?  It makes sense to me that July 2006 could have squeaked out a positive, since that was at the tail end of a strong period of growth. But July 2009? No, not even in the slighest.

However, I would have expected the fact that the B-D model has added 879,000 this year since the last true-up in January, during the worst period of economic growth since the Great Depression, to have been a strong indication that this July would have resulted in one of the largest negative July adjustments on record.  Instead we got the strongest positive one!! 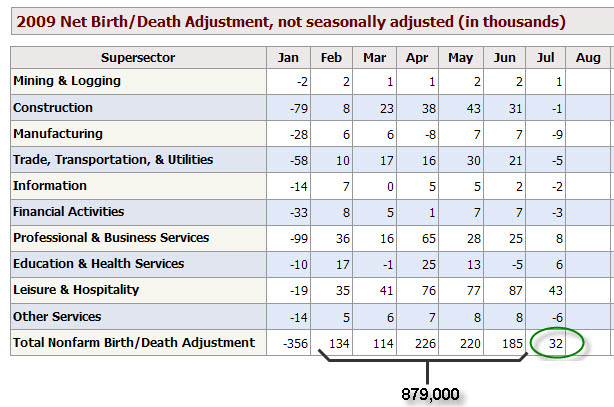 This is simply so far out of the bounds of "reasonable" that I am almost out of words.

But it gets worse.

In the table below showing the Household data (source), we can see that the way in which the rate of unemployment dropped from 9.5% to 9.4% was almost entirely due to the fact that 637,000 people were dropped from the labor force – not from an increase in employment. 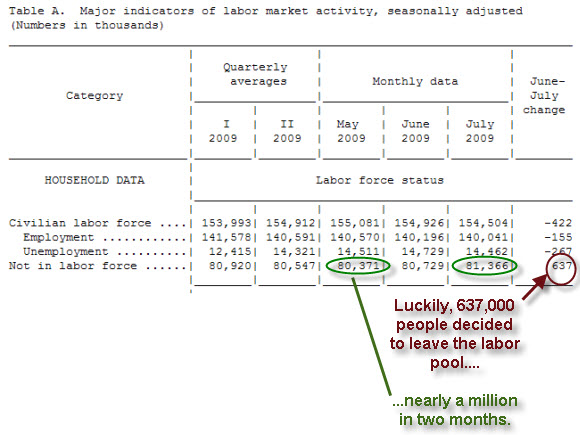 If we left these 637,000 people in the labor force, then the rate of unemployment would have increased from 9.5% to 9.8%. What’s the difference between unemployment slipping to 9.4% rather than increasing to 9.8%?

All the difference in the world when you have a major initiative underway:

[Note: I am not displaying any sort of partisan or political bias in posting this news item – I am devoutly non-partisan and my track record spanning administrations will bear this out.]

Obama Setting Out to Put Brighter Face on Economy

WASHINGTON — The White House is making a major push this week to persuade Americans that President Obama’s policies are helping bring the nation out of recession. But a four-letter word — jobs — may well get in the way.

With poll numbers showing that support for Mr. Obama’s handling of the economy has declined, the president and other top administration officials — Vice President Joseph R. Biden Jr., Energy Secretary Steven Chu and Commerce Secretary Gary Locke — will hit the road on Wednesday in a coordinated show of force.

They will try to make the case, as the president said Saturday in his weekly address, that “in the last few months, the economy has done measurably better than expected.”

They have some statistics to back them up.

If you are wondering about the political pressure that propels the BLS (et al.) to produce misleading but favorable economic statistics, you need look no further than this article. Obama, like every president before him, has a strong desire to use his station to inject optimism into the economy.  That’s hard to do when the statistics are dismal, so every effort is made to have them be brighter and more favorable than they really are.   Same as it ever was.

Bad statistics can be good for politicians, but not so much for sound decisions.

Do we have the "clearest evidence yet that the economy is turning around," as the original article claimed above, or do we have evidence of something else, like, perhaps, statistical trickery?