I had a number of requests to make this particular Insider post (for enrolled members) from Wednesday public.

There was a huge amount of press and follow-up to the Guardian article of the leaks.  This theme is important enough to continue exploring.  Anybody who has seen the Crash Course does not need any more information about Peak Oil itself.

Instead, I am most fixated on when a tipping point in global awareness about Peak Oil might occur.  That’s why this revelation and all the press it has been getting has been extremely interesting to me.

The first article helps to provide some more context and backing for the ‘leaks,’ which turn out not to have been very original leaks, since others were told this same information as early as 2007.

I am not surprised that some within the IEA have leaked this news. Rather, it is astonishing that this has not become known earlier. (See the article in the Guardian: Key oil figures were distorted by US pressure, says whistleblower.)

The article ”The Peak and Decline of World Oil and Gas Production” was published as long ago as 2003 in the scientific journal Minerals and Energy – Raw Materials Report by Kjell Aleklett and Colin C. Campbell (Volume 18, Number 1, 2003 , pp. 5-20[16].) It was the first “peer reviewed” article to discuss Peak Oil.

That article was read in 2007 by representatives of the “Global Transport Forum” of the OECD and they gave me the task of writing the report, ”Peak Oil and the Evolving Strategies of Oil Importing and Exporting Countries”. This report was one of those discussed at a round table meeting that was held in the IEA’s conference room in Paris.

At that opportunity, in November 2007, I had a number of private conversations with officers of the IEA. The revelations now reported in the Guardian were revealed to me then under the promise that I not name the source. I had earlier heard the same thing from another officer from Norway who, at the time he spoke of the pressure being applied by the USA, was working for the IEA. Since these anecdotes were not scientific evidence I never made use of the information other than as inspiration to continue our own research.

Earlier, following a suggestion by Colin Campbell, I had communicated to Sweden’s delegate at the IEA that Sweden should leave the IEA since it was deceiving the world and this would have serious consequences globally. I also asked how they could approve of something like the World Energy Outlook that was so in error. I had previously posted an analysis of World Outlook 2004 on ASPO’s homepage. In the discussion that followed it was revealed that the USA was applying pressure. The pressure was that the IEA should consider the prognoses that USA’s Energy Information Agency releases half a year earlier as guidelines for the IEA report. In connection with this I can mention that, in 2003, we received financial support from [Sweden’s] Energy Authority to begin the research that has now resulted in our publication “Peak of the Oil Age” and that Sweden’s Energy Authority also financed the first Peak Oil conference (ASPO) that we held in Uppsala in 2002.

After meeting with the Swedish delegate I have, at various times, communicated my view that Guy Caruso (who was then responsible for the EIA and its prognoses) was one of the world’s most dangerous people. Today a great deal of the responsibility for this situation rests with him. I have also asserted that I did not think that the level of competence within the IEA could be so low that all of its officers believed in what they have been presenting. What these faulty analyses will cost the world in the future is difficult to estimate but all the crisis packages that are currently in place are presumably a smaller part of that cost. In our publication ”How reasonable are oil production scenarios from public agencies?” we have shown that the IEA’s future prognoses are erroneous.

I’ve met Kjell, and he is every bit the solid and precise professor-type that one could wish for in a trusted source.  His very presence conveys that he is neither prone to hyperbole nor given to error.  He comes across as quite reserved and precise.  Note what he has said here.

Taken together this is another source of confirmation that political influences warped the reports of the IEA to present a rosier view of oil supplies than was warranted and that it’s been going on for a long time.

If this were an isolated experience, we might discount it some, but it seems to be something of a tradition in the oil business.  This next article is a blast from past, April 2004, and speaks for itself:

The Royal Dutch/Shell Group’s oil production in Oman has been declining for years, belying the company’s optimistic reports and raising doubts about a vital question in the Middle East: whether new technology can extend the life of huge but mature oil fields.

Internal company documents and technical papers show that the Yibal field, Oman’s largest, began to decline rapidly in 1997. Yet Sir Philip Watts, Shell’s former chairman, said in an upbeat public report in 2000 that ”major advances in drilling” were enabling the company ”to extract more from such mature fields.”

The internal Shell documents suggest that the figure for proven oil reserves in Oman was mistakenly increased in 2000, resulting in a 40 percent overstatement.

Unfortunately, these “mistaken increases” in supply vastly outnumber any “mistaken decreases,” which are rare enough that I cannot recall any.  The game of talking up “major advances in drilling” is nothing new.

Given that supply and demand were thought to be perilously close to each other in 2008 (back when the economy was humming along), the political slanting of supply forecasts is a deeply troubling move.

For our purposes, it is important to consider what will happen when – not if, but when – all of the ersatz funny-money printed across the globe smacks into oil resource scarcity.

We’re not the only ones wondering about that possibility anymore. On November 10th, 2009, TIME magazine put it this way:

After the Recession, Will the World Face an Energy Crisis?

Here’s the bad news about the global recession’s potentially coming to an end: the recovery could spark a massive energy crisis with increased demand for fossil fuels from China and other developing countries, tighter oil supplies and skyrocketing oil prices. And this is just in the near future. The longer-term picture looks even more daunting.

The article goes on to veer off into global warming which, truth be told, is only one of several concerns we might have about burning up our last oil, and certainly not the most immediate concern.  The main concern should be that we have an economic and monetary system that are addicted to the type of exponential growth enabled by increasing quotas of oil.

Why is this our most immediate concern?  Because without a functioning economy and monetary unit, I seriously doubt we’ll even be able to coordinate ourselves to extract the last, distant, and technically challenging energy supplies.

Unfortunately, with the entire world stimulating away, we might not have as much time as I originally thought before the next energy shock.  Check out these numbers that came out from China today.  (Note: I take all numbers from China with a grain of salt):

Industrial production for the month surged 16.1% from the year-earlier period, outpacing a 15.5% increase forecast in a survey by FactSet Research, and beating September’s 13.9% growth. Retail sales also climbed 16.2%, aided by consumer spending during an extended Golden Week holiday that lasted eight days this year compared with last year’s seven-day break.

At a 16% growth rate, this implies that China will be doubling their industrial production every 4.3 years.  I certainly don’t think they can keep up that rate of expansion, but you get the idea…China is growing extremely rapidly.  While we can’t be sure of the actual amount of growth, it is clear that China is just as serious about keeping on a path of steady, if not explosive growth, as any western nation.

One of the cool facts to remember about doublings is that with each doubling you use up more resources that in all of the prior doublings combined.  So if China’s energy use doubles in 10 years it will mean that over the next ten years they will use up more energy over those ten years than in all of history.

Here’s a follow-up article in the Guardian on this subject:

Take the 2008 edition of World Energy Outlook, the annual report on which the entire energy industry and governments depend. It included the table also published by the Guardian today, and the version I saw had shorter intervals on the horizontal axis. What it made blindingly clear was that peak oil was somewhere in 2008/9 and that production from currently producing fields was about to drop off a cliff. Fields yet to be developed and yet to be found enabled a plateau of production and it was only “non-conventional oil” which enabled a small rise. Think tar sands of Canada, think some of the most climate polluting oil extraction methods available. Think catastrophe.

What made this little graph so devastating was that it estimated energy resources by 2030 that were woefully inadequate for the energy-hungry economies of India and China. Business as usual in oil production threatens massive conflict over sharing it.

Now, this all seemed pretty gigantic news to me but guess where the World Energy Outlook chose to put this graph? Was it in the front, was it prominently discussed in the foreword? Did it cause headlines around the world. No, no, no. It was buried deep into the report and no reference was made to it in the press conference a year ago.

While the rest of the world missed that buried graph, I had written about it and included it in a report written within a week of the release of the IEA report.  It caught my eye immediately and I brought it to my readers’ attention as soon as I could.  That’s what I do.  I find things that are relevant and surface them months (if not years) ahead of the consensus.

At any rate, here it is again, and it deserves your fullest attention. 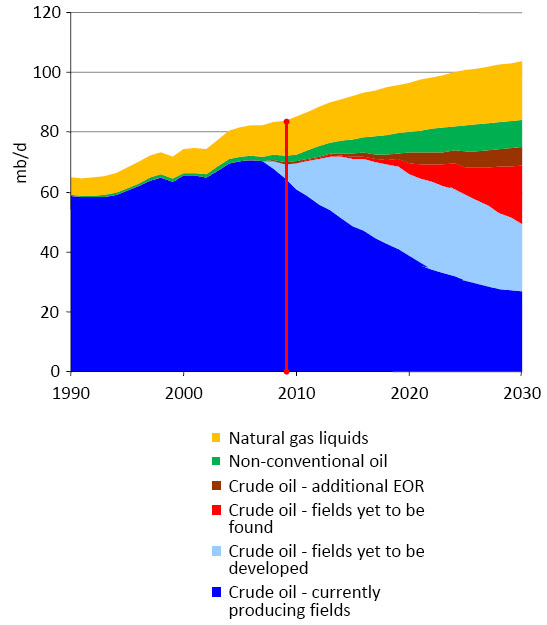 Note that the only way for the oil supply growth targets to be achieved is for a massive wedge of “oil fields yet to be developed” to come on line.   It’s worse than that, actually, because that phrase implies something that is not true.   It implies that the oil has been discovered and merely needs to be developed.  In fact, it needs both to be discovered and developed.

Why am I harping on energy again?  Because it is the most important element to our lives and economy (as they are currently configured) that there is.  Everything else is a derivative of ample and cheap energy.  Everything.

While I may be a couple of years early here, the potential impacts of the next oil shock will be quite profound, and I encourage everyone to begin acting as if Peak Oil is real and a lot closer than is widely recognized.

I am not saying we should act as if all this is written in stone and sure to happen. but I am saying that at least a portion of your thinking and your wealth strategy needs to be dedicated to the chance that it is all too real.

The signs are everywhere now, and I want to caution you that when a tipping point in awareness spreads across the globe, it will occur with startling speed.

In this great game, it is important to keep your eye on energy.