First, a warning about the dollar. As you know, I’ve been keeping a close eye on the US dollar and have been very concerned over the years that the dollar would someday steeply decline against foreign currencies. In fact, the dollar has been steadily eroding in value for since 2002, and it is now poised at a critical spot where there are really only two choices: a sustained rally or a serious drop.

The dollar chart below shows the monthly ‘value’ of the dollar as measured against a basket of foreign currencies. The red line shows that the dollar is now perched at a level last seen in 2005 and (off the chart) in 1992. 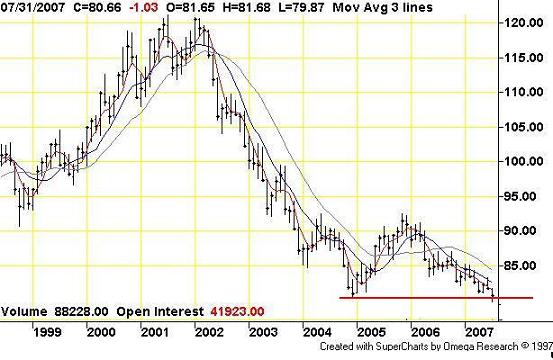 If the dollar breaks through this level of ~ 80 on this chart, then it’s anybody’s guess as to how much farther it would fall after that.

In truth, the dollar should be a lot lower than even this dismal level right now, but foreign central banks, notably Japan and China, have been working very hard to keep the dollar propped up over the past few years. If this foreign propping should ever end, we’d immediately experience two things, a rapidly falling dollar (leading to rapidly rising import prices, notably for crude oil) and sharply higher interest rates (because the Chinese hold their dollars in US bonds, which, when sold, cause interest rates to rise).

That’s a certain recipe for unpleasantness in the US economy. So it is of critical importance that dollar support be maintained. However, China is now making threatening noises in this regard, warning the US that our insistence on a higher Chinese yuan is unwelcome:

The Chinese government has begun a concerted campaign of economic threats against the United States, hinting that it may liquidate its vast holding of US treasuries if Washington imposes trade sanctions to force a yuan revaluation.

Two officials at leading Communist Party bodies have given interviews in recent days warning – for the first time – that Beijing may use its $1.33 trillion (£658bn) of foreign reserves as a political weapon to counter pressure from the US Congress.

There may be a lot of compelling reasons why China would not want to follow up on this threat, but it’s worth your time to consider what you’d do if it did. While there’s no "one size fits all" solution, a few basic steps to consider would be:

On that last point (#4), there are some other reasons to be concerned right now. It turns out that the US credit markets, principally for mortgage debt, are undergoing some pretty dramatic convulsions, and while I can’t say for sure how bad it will all be, I can tell you that fear has finally returned to our capital markets after a particularly long absence.

However, should the dollar start to break down in a serious way, I don’t know what else to counsel besides "Stay alert!" It is entirely unknowable to me how our highly leveraged house-of-cards economy would actually behave in a dollar crisis, but I think it’s prudent to question whether all of our financial institutions would remain solvent.

As you know, I’ve always been deeply suspicious of the modern financial alchemy that has allowed Wall Street to skim record profits off of dodgy pools of repackaged mortgage loans while simultaneously claiming to have reduced the risk of those instruments. Huh? How does one start with a pool of bad credit risk loans (many of them fraudulent ‘liar loans’), strip out a whole bunch of money, and end up with a safer product? I don’t believe it’s any more complicated than that, and I’ve been saying so for several years.

And, in truth, this is now pretty much obvious to everyone in the financial industry as well. Paul Muolo, executive editor and associate publisher of National Mortgage News, had this to say:

"I’ll put it bluntly: if you operate a non-depository mortgage firm (lender or servicer) and don’t have a deep-pocketed parent or hedge fund as a sugar daddy you’re likely to be out of business by year-end, probably sooner.

In the 20-plus years that I’ve been covering residential finance I haven’t seen a financial meltdown this swift since the S&L crisis of the mid-to-late 1980s. One subprime executive who closed his shop a few months ago told me, "This is a liquidity crunch the likes I have never seen."

So industry insiders are publicly saying that this is the worst financial crisis to hit since the S&L crisis. Of course, that is the perfect analogy, because the S&L crisis was precipitated by the easing of lending standards that morphed into the usual mélange of bad investments and outright fraud. Same as our current crisis.

Because of this similarity, what should you, the beleaguered taxpayer, be on the lookout for? A bailout, of course.

Looks like we won’t have to wait very long for the government officials to begin to look for ways to "help people keep their houses," which is DC code-speak for "help my uber-rich banking buddies avoid paying for their mistakes."

Here’s an email from the CEO of IndyMac, the second largest independent mortgage lender, that came out last week:

Unfortunately, the private secondary markets (excluding the GSEs and Ginnie Mae) continue to remain very panicked and illiquid. By way of example, it is currently difficult, at present, to trade even the AAA bond on any private MBS transaction.

In addition, to give you an idea as to how unprecedented this market has become…I received a call from U.S. Senator Dodd this morning who seeking an understanding of "what is really going on and how can I and Congress help?"

The interesting part is to hear this kind of talk already before the crisis has even really begun. Over the next 12-145 months, more than $1.5 trillion of additional subprime mortgages will be resetting to higher rates, and that’s when I expect the crisis to really get underway. Still, I have to wonder how many more US tax dollars are going to be wasted trying to help people keep houses they can’t afford (which many lied to get into) and thereby bail out a mortgage and banking industry that would prefer not to have to give back any of the obscene profits they made off of this racket.

I mean, what, with bridges crumbling, a waste-water infrastructure that scores a D-minus, two tragically expensive wars, and a looming pension crisis of biblical proportions, it’s not like we really can afford to bail out the rich, the greedy, and the stupid. I say, let them live with the consequences of their decisions. Call it tuition or something.

Besides, a bailout will not help at all. The main problem is that house prices rose too far away from median incomes and no amount of mortgage assistance is going to remedy that problem. Median house prices need to fall anywhere from 10% to 60%, depending on the market.

My prediction is that this will happen over the next 3-4 years, no matter what sort of government intervention schemes are hatched.

In the meantime, I’m going to sit tight, stay alert, and ponder my options.

No Comments on The Game Is Afoot