I give really, really boring advice. For years it has not changed a whit, and that’s just not the way to run a newsletter business.  There should be some movement, some pizazz, new things to ponder.  Instead I just keep saying the same thing over and over again.

Buy gold (and silver, too).

This is what I’ve been saying for the past seven years, ever since gold was in the $300’s and silver was under $5, so you might be tempted to think I am simply another gold bug.  While I confess to finding a certain allure in heavy bullion coins – they sound great tossed on a counter and feel good in my hand – I am not really a gold bug.

Instead, what I am is a gigantic, unrelenting, anti-fiat-currency bug.  Well, at least I am anti-mismanaged fiat currencies, but that pretty much encompasses them all to varying degrees.

As with all investment,s I have an exit strategy in my mind that will dictate when I sell my gold and silver to place those funds in other productive investments.  Unfortunately, that day seems further away than ever.

Let me explain why.

As I pondered the many details of euro zone bailout, I came to the conclusion that it is little more than a shuffling of debt risk from one place to another, and I couldn’t escape the larger conclusion that nothing had been solved at all.  Debt was merely shuffled from one location to another, from the banks to the public.

The bottom line is that Greece is merely the poster child for what happens to a country at the end of a long period of living beyond its means.  But it is by no means unique in having over-promised benefits to its citizens, and now faces a toxic brew of poor growth prospects, enforced austerity, demographic pressures, and an enormous mismatch between what has been promised and what can be delivered.

The only clear winners in the euro zone “solution” are the banks, which (again) have been relieved of the burden of paying for their own mistakes (again) by passing their horrible investment decisions back to the public (again).  I guess moral hazard is a winner in this instance, too.

Banks had loaded up on Greek debt because it paid a higher rate of interest than other sovereign debt.  It did so because it had a higher chance of default, so it was riskier.  Now that it has defaulted, the cost of that mistake has been transferred to the citizens of various countries, including as much as possibly $50 billion from US citizens.

Compare that to the long, protracted legal battle that the residents of the Gulf states will face to extract $1-2 billion from BP/Uncle Sam for the environmental and economic catastrophe unfolding down there, and you’ve got a pretty good start on understanding why anger is building throughout the land.

The euro zone bailout, unlike its US counterpart, does not create vast quantities of new money out of thin air (as did the MBS purchase program by the Fed), but instead seeks to ‘solve’ a debt problem by creating new debt.  Many people have come to the conclusion that this solves nothing, and, worse, it exposes the Ponzi-like character of the modern debt-based money system for all to see.

The dirty little secret of banking is that bankers have no interest in seeing the loans they make get paid back. All they want is for the interest payments to be made.  As long as the interest payments are being made, it doesn’t really matter how large the outstanding loan balance is.  That just gets rolled over.

Loans default when a borrower misses an interest payment.  The Greek crisis was precipitated by the very real prospect that Greece was going to miss an interest payment on May 19th.  Only once this prospect was raised did the overall amount of Greek debt become a source of concern.  Without Greece potentially missing an interest payment, there was no crisis and no problem.  Which is exactly how we got into this mess.

Even as the financial media parse over the ugly details of Greece’s situation and gnash their teeth at the fact that Greece apparently has too much debt, the ugly truth is that there are many countries in similarly bad shape.

However, we persist in telling ourselves pleasant little lies to help distort the seriousness of the situation. Here’s a perfect example from the New York Times today (5/12/10).

Yet in the back of your mind comes a nagging question: how different, really, is the United States?

The numbers on our federal debt are becoming frighteningly familiar, David Leonhardt writes in The New York Times. The debt is projected to equal 140 percent of gross domestic product within two decades. Add in the budget troubles of state governments, and the true shortfall grows even larger.

Greece’s debt, by comparison, equals about 115 percent of its G.D.P. today.

According to this pleasant little myth, the US has a couple of decades before its debt might possibly hit 140% of GDP.  That doesn’t sound too bad, now, does it?  After all, we’re as far away from that moment as we are from the collapse of the Soviet Union back in 1990.  Seems like a long time.

And Greece, a country we can now all openly deride as clearly irresponsible, is already at 115% of GDP.

The problem with this little narrative is that it conveniently excludes all the off-balance-sheet obligations that governments routinely exclude to hide the severity of the current predicament.  The red bars in the chart below are the relatively tiny amounts with which we console ourselves, like in the article snippet above.  The gray bars include all official liabilities. 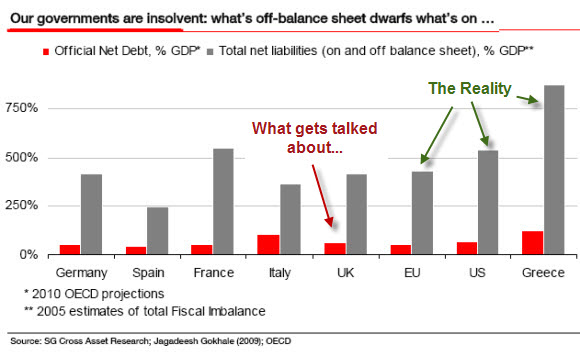 So even as we tut-tut over those profligate Greeks and their unserviceable debts, we’d do well to take this opportunity to note that most of the rest of the developed world is in similar straits.

As bad as that is, the even uglier reality is that the true debt situation of a country must include ALL debts public and private.  After all, those are the ones that the productive economy must service over time.  While we might wish to secure a better view of the situation by turning down the lights and squinting slightly before looking in the mirror, we do ourselves no favors by doing so.

For the US, the ‘full light of day; eyes wide open’ chart looks like this. 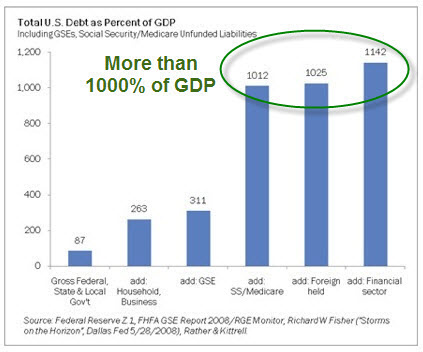 If the US or UK were ‘asked’ by the IMF to reduce their budget deficits by a full 10% over the next two years, each would spiral into a deep, dark depression and be crushed by increasingly unbearable debt loads.

The twin pillars of Keynesianism, official deficits and monetary inflation, are being tried on both sides of the pond, but they are not working as they have in the past.  Debt saturation has sapped the ability of either policy to work and, because of this lack of traction, you can be sure that additional financial crises lurk in the shadows ready to pounce.

The odd part in this story is how few people, especially finance professionals that should know better, seem to really understand and accept the idea that the game has fundamentally changed.

Anybody with a passing interest could calculate that debts cannot grow forever and that there would come a day when debt service costs would consume 100% of the productive output of the world.  On that day, the old game ends and a new game begins.

Where the old game was predicated on perpetual debt roll-overs and rapid economic growth, we now have ample evidence that these features can no longer be counted upon.  Yet many persist in acting as if they are 100% certain to return.

Prudent investors, managers, and policy-makers ought to be seriously considering the prospect that our economic landscape has been fundamentally altered.  What happens if, just like every other time in history, debt saturation leads to prolonged economic stagnation?  Worse, what happens if during our recovery it turns out that Peak Oil is real and we cannot rely on increasing energy throughput to work its magic and stimulate the growth necessary to service increasing interest payments?

Do we have the management skills to navigate this landscape?  Will we recognize the reality of the situation, or will we continue to apply band-aids until the entire mess simply breaks down in a manner that even an incumbent politician is forced to recognize?  Will blind adherence to preserving the status quo prevent us from seeing the obvious in time?

And here’s where we get to gold.

This week saw gold break out to a new all-time high (although not in inflation-adjusted terms, which the mainstream media nearly always mentions, despite never running the same calculation for stocks):

I think gold is signaling a generalized loss of faith in fiat money and debt, as well as a lack of faith in recent attempts to ‘fix’ the debt problem.  Most of the buying pressure seems to be coming from the European continent, where people’s memories include several recent destructive bouts of inflation.

More to the point, in Europe, gold is not frowned upon as a legitimate investment vehicle, like it is in so many quarters of the US.  If you step into a Swiss bank and ask to buy gold to store in a vault, the person serving you will nod knowingly and treat you to a solemn tour of their facilities.

So I am quite closely following the situation with gold, now that 700 million Europeans have seemingly stepped into the buying mix with renewed interest.

Under what circumstances would I consider transitioning away from gold and silver as my preferred means of preserving my wealth?  I would want to see four things:

As you can tell, it may be quite a while before I can finally unwind my gold trade.

Which means I am going to be giving remarkably boring advice for a long time.