The greatest shortcoming of the human race is our inability to understand the exponential function.

It is run by humans.

Oh, wait, that’s a valid complaint, but not the one I was looking for.  Here it is:

What’s going on here? Could it be that the US economy is so robust that it requires monetary and credit growth to double every 6 to 7 years? Are US households expecting a huge surge in wages, to be able to pay off all that debt? Are wealthy people really that much more productive than the rest of us? If not, then what’s going on?

The key to understanding this situation was snuck in a few paragraphs ago: Every single dollar in circulation is loaned into existence by a bank, with interest.

That little statement contains the entire mystery. If all money in circulation is loaned into existence, it means that if every loan were paid back, all our money would disappear. As improbable as that may sound to you, it is precisely correct, although some of you are going to consider this proof that I could have saved a lot in tuition costs if I had simply drunk all that beer at home. But with a little investigation, you would readily discover that literally every single dollar in every single bank account can be traced back to a bank loan somewhere. For one person to have money in a bank account requires someone else to owe a similar-sized debt to a bank somewhere else.

But if all money is loaned into existence with interest, how does the interest get paid? Where does the money for that come from?

If you guessed "from additional loans," you are a winner! Said another way: For interest to be paid, the money supply must expand. Which means that next year there’s going to be more money in circulation, requiring a larger set of loans to pay off a larger set of interest charges, and so on, etc., etc., etc. With every passing year, the money supply must expand by an amount at least equal to the interest charges due on all the past money that was borrowed (into existence), or else severe stress will show up within our banking system. In other words, our monetary system is a textbook example of a compounding, or exponential, function.

Yeast in a vat of sugar water, lemming populations, and algal blooms are natural examples of exponential functions. Plotted on graph paper, they start out slowly, begin to rise more quickly, and then, suddenly, the line on the paper goes almost straight up, threatening to shoot off the paper and ruin your new desk surface. Fortunately, before this happens, the line always reverses somewhat violently back to the downside. Unfortunately, this means that our monetary system has no natural analog upon which we can model a happy ending. 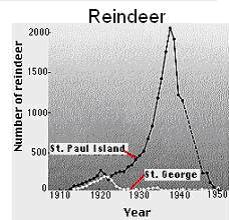 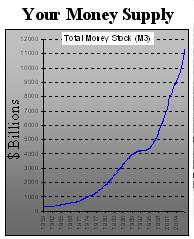 When comparing the two graphs above, you are probably immediately struck by the fact that one refers to a nearly mythical creation especially revered at Christmas time, while the other is a graph of reindeer populations. You may have also noticed that our money supply looks suspiciously like any other exponential graph, except it hasn’t yet transitioned into the sharply falling stage.

To get the best possible understanding of the issues involved in exponential growth while spending only 10 minutes doing so, please read this supremely excellent transcript of a speech given by Dr. Albert Bartlett. If, like me, your lips move when you read, it may take 15 minutes, but I’d still recommend it. In this snippet he explains all:

Bacteria grow by doubling. One bacterium divides to become two, the two divide to become 4, become 8, 16 and so on. Suppose we had bacteria that doubled in number this way every minute. Suppose we put one of these bacterium into an empty bottle at eleven in the morning, and then observe that the bottle is full at twelve noon. There’s our case of just ordinary steady growth, it has a doubling time of one minute, and it’s in the finite environment of one bottle.

I want to ask you three questions:

First, at which time was the bottle half full? Well, would you believe 11:59, one minute before 12, because they double in number every minute?

Second, if you were an average bacterium in that bottle at what time would you first realize that you were running out of space? Well let’s just look at the last minute in the bottle. At 12 noon its full, one minute before its half full, 2 minutes before its 1/4 full, then 1/8th, then a 1/16th.

And inally, at 5 minutes before 12 when the bottle is only 3% full and is 97% open space just yearning for development, how many of you would realize there’s a problem?

And that’s it in a nutshell, right there. Exponential functions are sneaky buggers. One minute everything seems fine; the next minute your flask is full and there’s nowhere left to grow.

So, who cares, right? Perhaps you’re thinking that it’s possible, just this one time in the entire known universe of experience, for something to expand infinitely forever. But what happens if that’s not the case? What happens if a monetary system that must expand, can’t? Then what? How might that end come about? And when? For an excellent description of this process, read this article by Steven Lachance (emphasis mine):

A debt-based monetary system has a lifespan-limiting Achilles heel: as debt is created through loan origination, an obligation above and beyond this sum is also created in the form of interest. As a result, there can never be enough money to repay principal and pay interest unless debt is continually expanded. Debt-based monetary systems do not work in reverse, nor can they stand still without a liquidity buffer in the form of savings or a current account surplus.

When interest charges exceed debt growth, debtors at the margin are unable to service their debt. They must begin liquidating.

Mr. Lachance reveals the mathematical limit as being the moment that new debt creation falls short of existing interest charges. When that day comes, a wave of defaults will sweep through the system. Which is why our fiscal and monetary authorities are doing everything they can to keep money/debt creation robust.

But it’s a losing game, and they are only buying time. How do I know? Because nothing can expand infinitely forever. The evidence clearly points to exponentially rising levels of money and credit creation. As the bacterium example shows, once an exponential function gets rolling along, its self-reinforcing nature quickly takes over, requiring larger and larger aggregate amounts, even as the percentage remains seemingly tame.

Similarly, our supremely wealthy suffer only from an inability to spend what they ‘earn’ on their capital (interest & dividend income), which means their principal is compounding. But, because each dollar is loaned into existence, it means that when Bill Gates ‘earns’ $2 billion on his holdings, a whole lot of people somewhere else had to borrow that $2 billion. Taken to its logical extreme, and without enforced redistribution, this system would ultimately conclude with one person owning all of the world’s wealth. Game over, time for a Jubilee, hit the reset button, and start again.

When we started our monetary system, nobody ever thought that we would fill up our empty bacterium bottle. Nobody really thought through what it would mean to society once wealthy people earned more in interest & dividends than they could possibly spend. Nobody considered whether it was wise to place 100% of our economic chips into a monolithic banking system that requires perpetual, endless growth in order to merely function.

So, we must ask ourselves: Does it seem possible that our money supply can continue to double every 6 years forever? How about another 100 years? How about another six? What will it feel like when we are adding another $1 trillion every month, week, day, and then, finally, every hour?

Just remember, money is supposed to be a store of value; or, said another way, a store of human effort. Currently it seems to be failing at meeting that characteristic and therefore is failing at being money.

Who ever thought that oil production would hit a limit? Who knew that every acre of arable land, and then some, would someday be put into production? How could we possibly fish the seas empty?

We have parabolic money on a spherical planet. The former demands perpetual growth while the latter has definitive boundaries. Which will win?

What will happen when a system that must grow, can’t? How will an economic paradigm, so steeped in the necessity of growth that economists unflinchingly use the term ‘negative growth,’ suddenly evolve into an entirely new system? If compound interest based monetary systems have a fatal math problem, what will banks do if they can’t charge interest? And what shall we replace them with?

Since I’ve never read a single word on the subject, I suspect there’s even less interest in exploring this subject by our leaders than there is in being honest about our collective $53 trillion federal shortfall.

I am convinced that our monetary system’s encounter with natural and/or mathematical limits will be anything but smooth (possibly fatal), and I have placed my bets accordingly. It seems that our money system is thoroughly incompatible with natural laws and limits, and therefore is destined to fail.

Now you know why I have entitled my initial economic seminar series "The End of Money." [Although I later renamed it The Crash Course.]

But the end of something is always the beginning of something else. Where’s our modern day Adam Smith? We need a new economic model.

The greatest shortcoming of the human race is our inability to understand the exponential function. ~ Dr. Albert Bartlett

No Comments on The End of Money