Grant Williams pithily summed up the situation that has been plaguing gold since 2013: Nobody Cares.

Yes, it’s highly likely that the price has been suppressed. But not enough buyers cared to fight the bullion bank/central bank cartel or make life difficult enough for the politicians — and thus, the regulators — to change things.

So gold languished. For years.

But last August, gold quietly entered a bull market after breaking above $1200.

As the price began rising (for both fundamental & technical reasons), we’ve been tracking its progress closely.  We do so on a daily basis via Peak Prosperity’s Precious Metals Daily Commentary updates (outstandingly authored by user davefairtex), as key developments happened via our premium reports (like this prediction), and via expert interviews such as our recent in-depth discussions with TFMetals and Incrementum’s Ronni Stoeferle.

As we entered 2019, the increasingly dovish/desperate policy retracements of the central banks — which now appear will NEVER normalize their balance sheets — have boosted the bull run. 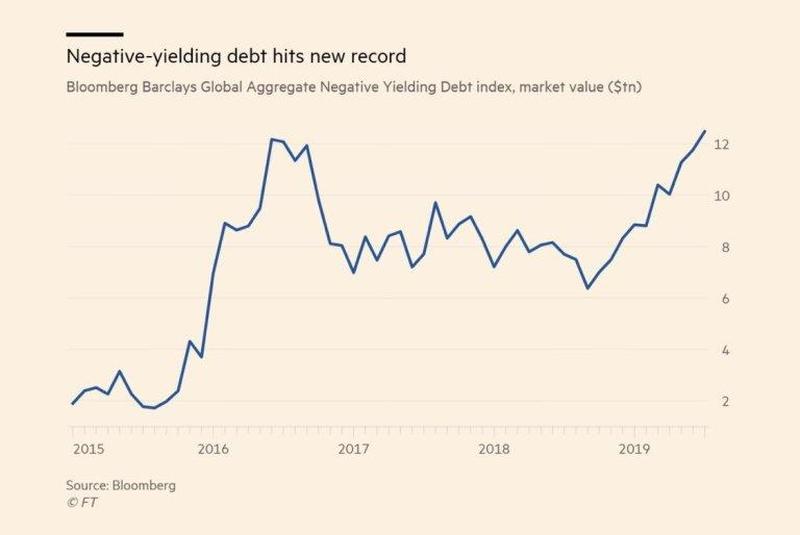 And based on this week’s further dovish announcements from both the Fed and the ECB, we can expect more $trillions to be added to that pile soon.

On Tuesday, Mario Draghi apparently went rogue on his fellow policymakers and launched into a swan song version of his all-time hit “Whatever it takes”. The next day, Jerome Powell at the Fed confirmed his willingness to ease and let the market know he stands ready to cut rates multiple times over the next year.

That — plus a downed US drone patrolling the Iran border — poured gasoline on gold, which spiked as high as $1,410/oz, finally breaking free of the $1,350 ceiling that had blocked its advance for years.

Technically, if gold can hold above $1,385, it has a lot of room to run from here. As the chart below shows, gold has traced out a reverse head-and-shoulders pattern and has now punched through the neckline — a bullish breakout — currently trading at $1,400/oz at the time of this writing, the highest price it has traded at since 2013.

Short of a raid orchestrated by the central planners to fasten tighter the cap on gold (which remains a real possibility given the historical record), the yellow metal shouldn’t encounter much price resistance until above $1,500/oz.

The metal itself and the miners are now in uptrends across all three timelines of the proprietary forecaster maintained by Peak Prosperity’s Precious Metals analyst davefairtex . We haven’t seen such strong indicators in, well…forever.

Here’s gold, which while registering overbought after its recent $100 spike, remains in a very strong uptrend: 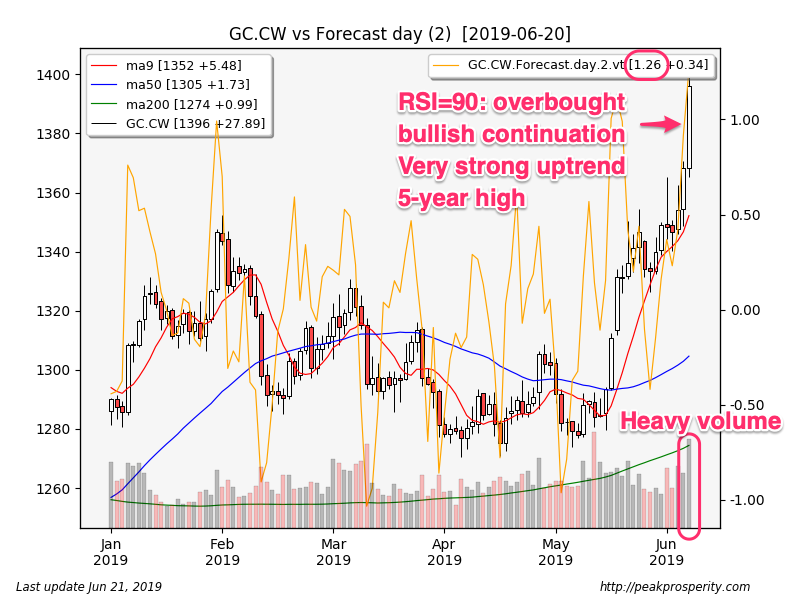 And here are the miners (represented by the XAU index), following gold nicely as would be expected, confirming a breakout: 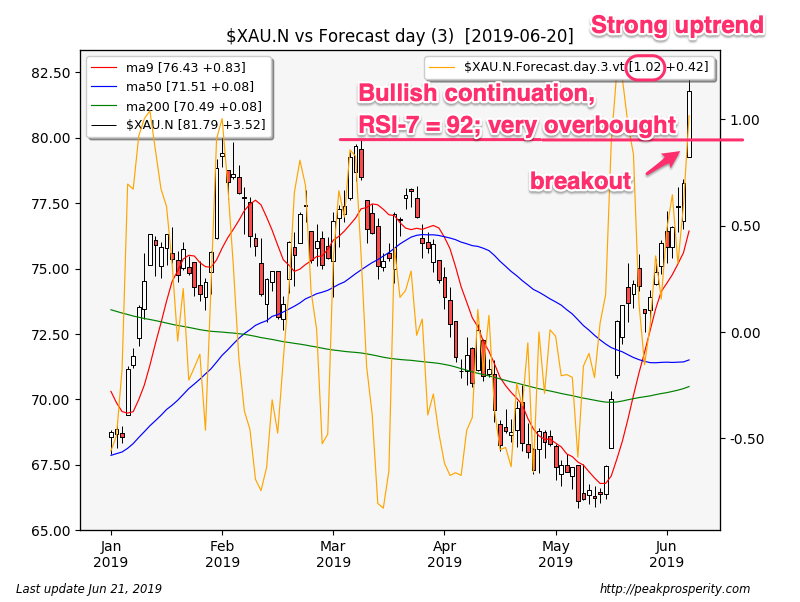 While we may see some price retracement over the immediate term, to be expected after such a monster run-up and as war-with-Iran fears (hopefully) ebb, Dave explains why the current macro situation remains bullish for gold:

The problem is, we have a newly-semi-dovish Fed happening at the same time as renewed interest in a US-China trade deal, a possible impending lockup of China’s banking system (!), the Iranian shoot-down of a US drone (over either Iranian territory – or Iranian waters – or International Airspace, take your pick), while Draghi over in Europe has been accused of lying about the ECB’s renewed dovishness, for which there is apparently no consensus after all. And Draghi is almost out the door himself, so there’s that uncertainty too.  Who will replace him?  Will they still be as print-happy?  Italy may be about to pay its debts using a new currency (the mini-BOT) which may or may not be illegal, and the EU is looking to fine Italy for having a high debt/GDP. This, while Apple has apparently decided to diversify its globalized supply chain outside China. Oh yeah. Boris Johnson appears to be a shoo-in for UK PM.

So what can we expect going forward?

This is the problem with safe haven moves. They spike higher, and then they deflate. And that history is why the commercials (I’m guessing here) play the odds and assume the world won’t end this time, and they go short into these big spikes. That, and there is probably some official intervention too.

Ultimately today’s breakout above 1382 is bullish.  Even if we do retrace the safe haven move, the 5-year resistance has been broken.  Although it appears as though it was the “Iran drone shootdown” snowflake that caused today’s gold buying avalanche, in truth it was probably a whole collection of snowflakes that led to an increase in overall uncertainty.  After all, gold has rallied for 4 weeks now.  The drone shootdown just pushed prices over the edge – turning it into a spike higher that even 134 “tons” of paper gold was unable to stop.

On the fundamental side, more and more experts and pundits are waking up to what PP has been saying all along: the central banks have painted themselves into a corner they don’t know how to get out of. So they keep using the one tool they have, hoping for a different outcome (and yes, perhaps pushing all of the wealth into the hands of the 0.1% *is* their desired outcome).

But that strategy is based on perverted logic; it can’t be sustained. You can’t print prosperity. There’s only so far asset prices can rise while real wages remain stagnant. Housing prices can’t long stay above people’s ability to put food on the table, even with <3% mortgages. There’s a point at which more stimulus no longer has any effect.

The smarter minds we talk with agree with us that the unfolding action we’re watching in real time is the total capitulation of the central banks. There’s nothing left after this one except money for Main Street, which we think the banks will hold in store to have *something* left for the arriving global recession (to be cutting rates at this point is absolutely insane).

So it’s quite likely a nasty deflationary downdraft lies in our future. While this may initially cause gold to drop in price, the metal should fare much better than the pantheon of risk-assets falling from their current all-time bubble highs. As we often say in our live presentations: “In a bear market, expect to lose money. The trick is to lose a lot less than everybody else”.

But even if the central banks succeed in preventing such a deflationary rout, then it will soon become confetti time for the word’s fiat currencies.

Do you realize that if you have a cool $1mil of cash on hand, you make only $20k/year if you have it in T-bills, or (much) less than that if kept in your bank account? Less than 5% of Americans have that kind of scratch on hand, and yet it produces an income below the US poverty level. If we stay on the trajectory we’re on, that $1 million won’t be worth diddly soon.

But gold? Gold should truly shine in this situation: both by maintaining its purchasing power and increasing in value as $trillions in capital look for safe haven.

Remember that the $7 trillion gold market is a small doorway compared to the $164 trillion held in stocks and bonds. (And the <$1 trillion silver market is ridiculously tiny relatively). If (more likely, “when”) just a few $trillion flee risk assets into the precious metals, the prices of gold and silver will explode.

Of course, our long-standing advice remains the same: Position yourself for this predictable outcome in advance.

Especially since the long awaited breakout above $1,350 has finally taken place. That technical milestone, combined with the last-gasp desperation the Fed and ECB have shown this week, indicate that the really big moves for the precious metals are now cleared to happen. Things could move quite quickly from here.

Specifically, we recommend availing yourself of the following three free resources if you haven’t yet already:

Finally, gold is no longer being ignored.

‘Somebody’ Cares. Which is why we’re now at the highest levels seen in over half a decade.

Just imagine what the price will be like when Everybody Cares…