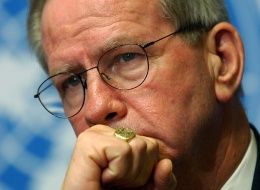 “Well, I wish I had a more hopeful answer for you. You’ve nailed it. We really are very likely to face either a disruption violently [by terrorism] or a political decision by OPEC to change the price of oil to $200 to $300 per barrel and literally destroy the global economy.”

So predicts Robert McFarlane in today’s interview, which focuses on current US energy policy and the risks it faces. Mr. McFarlane’s many decades of public and private service in both the Middle East and global energy markets make him uniquely qualified to opine on the merits (or lack thereof) of the energy strategy that the US is pursuing.

He sees the US as committed to a foolish “monopoly-fuel” system that leaves it dependent upon and dangerously vulnerable to the actions of external players, including those hostile to US interests. And as the impacts of Peak Oil begin to be felt, he believes it is a near certainty that our country – along with the global economy – will experience great shocks which we have no plans currently in place to address sufficiently. The solution lies in creating a viable market for alternative fuels, which is in our power to do, provided we can muster the politcal and civic will. And do so quickly.

Click the play button below to listen to Chris’ interview with Robert C. McFarlane (runtime 34m:39s):

In this podcast, Robert and Chris discuss:

As with our recent interviews with David Collum, Joe Saluzzi, Jim Rogers, Marc Faber, and Bill Fleckenstein, Robert ends the interview with advice for the listener, including contacting your representatives in Congress, expressing your concerns, and asking them to vote for the “open fuel standard.” Doing nothing is a mandate for the current monopoly system.

Robert C McFarlane served two tours of duty in Vietnam, then held positions as Special Assistant for National Security Affairs under President Ford and National Security Advisor & special representative to the Middle East and under President Regan. After his reitrement from public service he founded Global Energy Investors a developer of energy infrastructure projects in Asia and South America, and Energy and Communications Solutions LLC which focused on projects in Russia, Turkey and other emerging countries. He serves currently as Chairman of McFarlane and Associates Inc, a consulting firm focused on advancing techonologies in the national and homeland security domains. He now dedicates much of his time to peace-making efforts in the Middle East and reducing US dependence on foreign oil.