Resilience In Retirement, update on Day 442

Global warming: July 2019 was the hottest July on record here in NH but April 2020 was the coolest on record (and very wet). Already in May we had one day that hit 94 F and June was uncharacteristically warm.  We were hoping days with high temperatures above 90 F would be rare, but we have been disappointed. However, this experience is one of our many reasons to be glad we chose NH and not something warmer.

In evaluating our first year here and why we chose NH, we have felt 100% vindicated that we chose wisely and properly (for us, anyway).  Having travelled the state and nearby states, we have frequently said to each other, “This is nice, but where we are in Concord is perfect.” We’re grateful for that because I know that’s not always the experience people have when trying to pick a great place or in any other way improve their lives.

Among our reasons for picking NH was how rarely natural disasters strike here.  Putting aside the issue of whether the Honey Badger Virus was developed in a lab or not, our experience with it has been less severe than in most other places. The virus was late getting here which gave us and “the authorities” plenty of time to consider our responses.  Once it got here it wasn’t that bad (at least compared to nearby Massachusetts and New York).  Even though there has been considerable public rebellion against masks (Live Free or Die, or Live Free then Die!) most of the deaths have been concentrated among those over 70 or living in nursing facilities as you would expect. That makes me optimistic if something more virulent comes along.

Among our other reasons for choosing NH were “political climate,” “war” and “low crime,” and on those categories we’ve been even more pleased. With many cities and towns across the country convulsed with riots and protests, NH has been pleasantly quiet and civilized. Retiring May 12, 2019 from the Philadelphia Police Department where the zeitgeist is as anti-police as it gets in America, I’ve been thrilled to be here far from the maddening crowds. In fact, police officers are almost rock stars here.  There is a lot of respect and civility going in both directions between police and the public.

Social capital: When we moved here we didn’t know a soul and made it one of our main 1st year objectives to work hard on developing new social capital.  We have done this mostly through our church and the YMCA where we used to work out before they closed for the Honey Badger. We have been warmly received everywhere and have developed a surprisingly deep and wide group of friends and acquaintances.  When my wife had to have cancer surgery April 1, we were warmly supported and cared for even though we had only lived here 10 months at the time.  We had lived in Philadelphia for 31 years and we both estimated that our support system there wouldn’t have been as good as what we have here already.

On June 28, 2019 we took delivery from Carvana on a used 2017 Chevy Volt to reduce our carbon footprint, reduce our gasoline expenses, and give us some resilience in our transportation if prices go through the roof or something like gas rationing were to occur.  We got this little car with 21,000 miles on it and learned the first owner had lived in California. For the last six months of 2019 we experimented with the car to see what its capabilities are and how to maximize its value to us.  Remember the Volt’s battery always powers the front wheels and only when the battery is depleted does a little gas generator automatically start up to keep charging the battery so it can keep driving the wheels.  Unlike other electric vehicles (because the Volt is really a hybrid), we don’t have any “range anxiety” with the Volt. We could drive back to California without stopping to recharge as long as we stopped to get gasoline to run the gas generator. When we got the car the dashboard computerized readout indicated that its lifetime miles per gallon equivalent (mpge) was only 30.1. When running on the gas generator after the batteries have been depleted the car gets 27-33 mpg so a lifetime 30.1 mpge tells me the first owner was doing a lot of driving on the gas generator and would’ve gotten better gas mileage out of a small, efficient gasoline-engine car with high gas mileage.  The lifetime mpge now reads 51.0 mpge because we’ve been staying in the battery range.  It was smart of that owner to sell the car. Since January 1 we have been trying very hard to drive only on the batteries by staying within their range on trips.  (We have a pickup truck we use for trips beyond the Volt’s electric range.) Chevy advertised the Volt’s range on batteries as 53 miles but that is an average estimate.  When you get into the car the dashboard tells you approximately how many battery driven miles you can expect at that moment.  We found that number to be as low as 41 miles on a bitter cold February morning and as high as 73 miles on a pleasant summer morning with a temperature of 70 F.  So since January 1 we have driven 2,398 miles and used only 5.5 gallons of gas for an actual 436 miles per gallon. I disregard the dashboard readout for mpge because it assumes we’re paying for gasoline for the generator and electricity for the battery but since our house is solar-powered we don’t really pay for the electricity. At this point, we have put 6,000 miles on the car ourselves and believe it’s a great niche part of our overall energy and transportation approach. Most of our local trips are in the Volt.  For any long trips, driving in unplowed snow, or hauling we use the 4WD Chevy Colorado.

Home energy use: All of our appliances are electric, including the heat pump water heater, except our stove and emergency generator which both run on propane.  We have a wood burning stove and Mitsubishi heat pump “splits” for heating our 1480 sq. ft. We experimented all winter with the heating since we’ve never had a PV solar array on our roof or ever used a wood burning stove or the Mitsubishi splits. I’ll save you a description of what we did and what our learning curve was like, but I will say that I estimate that next winter if we burn 1.5 cords of wood we will be able to get our electric bill for 12 months down to $0 (which includes charging the car).  I look at wood heat as a form of renewable solar energy so I feel very good about that.  A cord of cut and split firewood costs us $150 – $220 delivered and we have about 6 cords on our property in various stages of dryness. So that means we have 4 winters of heating the house just sitting here ready to use.  Cutting and splitting our own wood is a future project. I estimate that if we don’t heat with wood our annual electric bill would be $800-1,000. Our Generac generator comes on automatically twice a month for 5 minutes as a test.  We only lost power one time and that was a planned 15 minute outage we knew about in advance for the utility company to do some maintenance. As long as electricity stays anything near that reliable I’ll feel like a genius for hooking up to the grid instead of going off grid with expensive batteries. We used about 50 gallons of propane during the year of which I estimate about 45 gallons was for cooking and canning on the stove and 5+ gallons for testing and running the generator. I never had to sweep snow off the solar panels or off the 9-pitch roof.  The snow just slid right off the panels within 1-3 hours once the sun came up, even if it was solidly overcast.

Gardens and landscaping: We started with an assumption that if we had to garden/farm enough food to feed ourselves during a food crisis in our retirement we wouldn’t make it. We figure our learning curve and advancing age would make that unrealistic.  So we decided not to get enough land for food self-sufficiency and instead to garden on our .63 acre for supplementing our diet, fun, beauty and exercise. We hired a landscape architect who listened to our needs and dreams and came up with a fantastic plan for us to implement. We exhausted ourselves last year getting about 70% of our open space planted in three areas: raised bed vegetable beds, pollinator gardens, and wildflower meadows.  In addition after we got here we added a land reclamation project at the back of our property that was overgrown with downed trees and 13 invasive species.  Our hope for that is to beat back the invasives enough to be able to use that land (about 2,000 sq. ft.) for more fruit trees. We have no lawn and no lawnmower, by design. Everything that isn’t planted (paths mostly) is covered with wood chips which we get delivered from the city arborist for free. We have a rainwater recovery system to help with watering the gardens but we have found it only works IF IT RAINS!!  We have two 330 gallon IBC totes that fill when we get 1/2” of rain.  We use about 60% of each for one watering. We had 1/4” of rain in about 6 weeks in May-June and are using city water to keep everything alive until we start getting normal rainfall.  All our landscaping is at most 12 months old and some as little as 2 months since planting so keeping everything adequately watered until the roots are well-established is critical. Next year I imagine we’ll require less watering even in drought conditions like we’re going through now. We built two cold frames for starting seeds, partially with recycled materials, but our first experience this spring was underwhelming. We’re licking our wounds and plotting about what to do differently next spring.

All things considered, we believe we’re off to a great start. We only hope we have a few more years of gardening experience and soil development before we actually need to rely on the garden produce for part of our essential calories and nutrients. 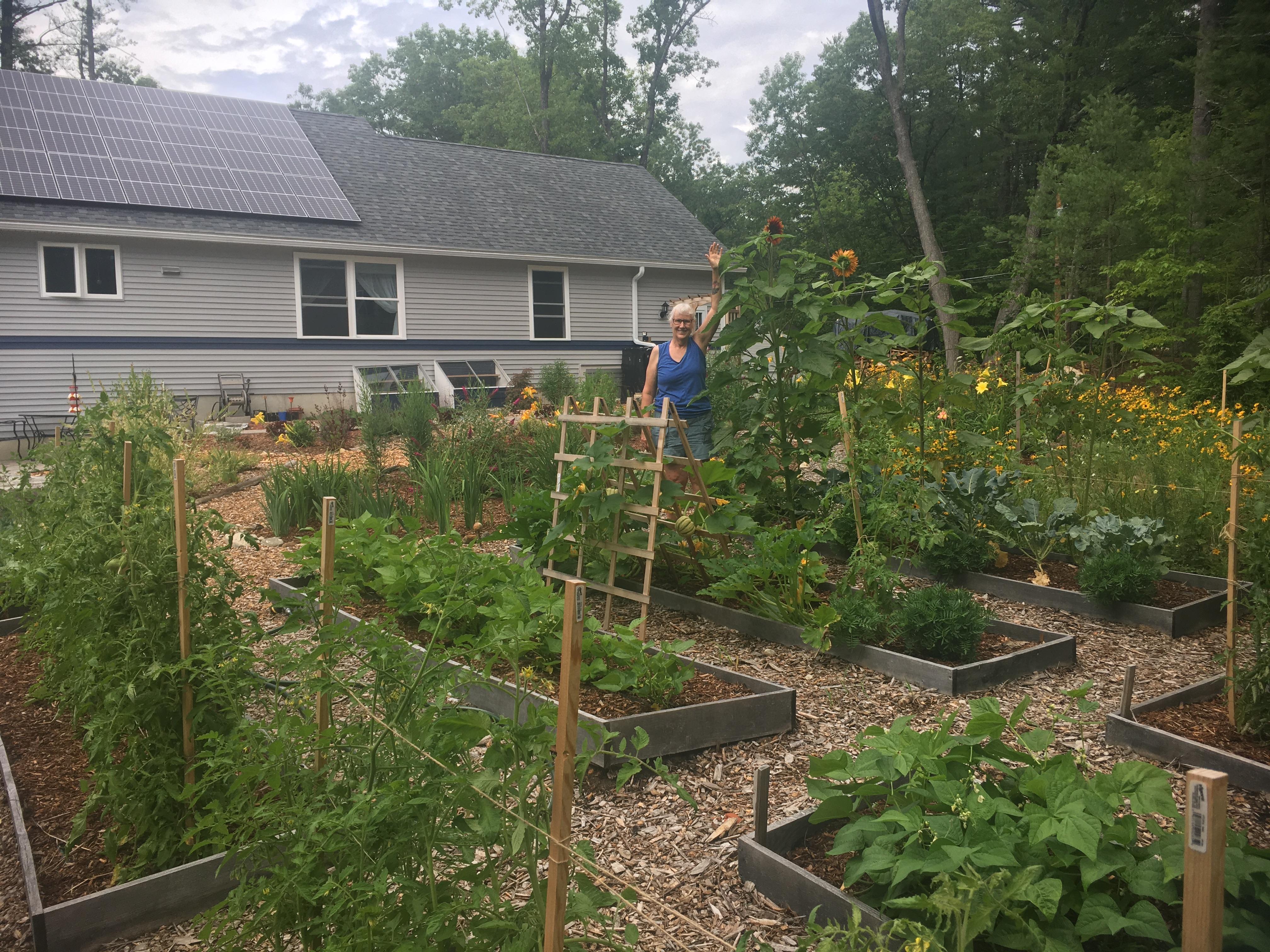 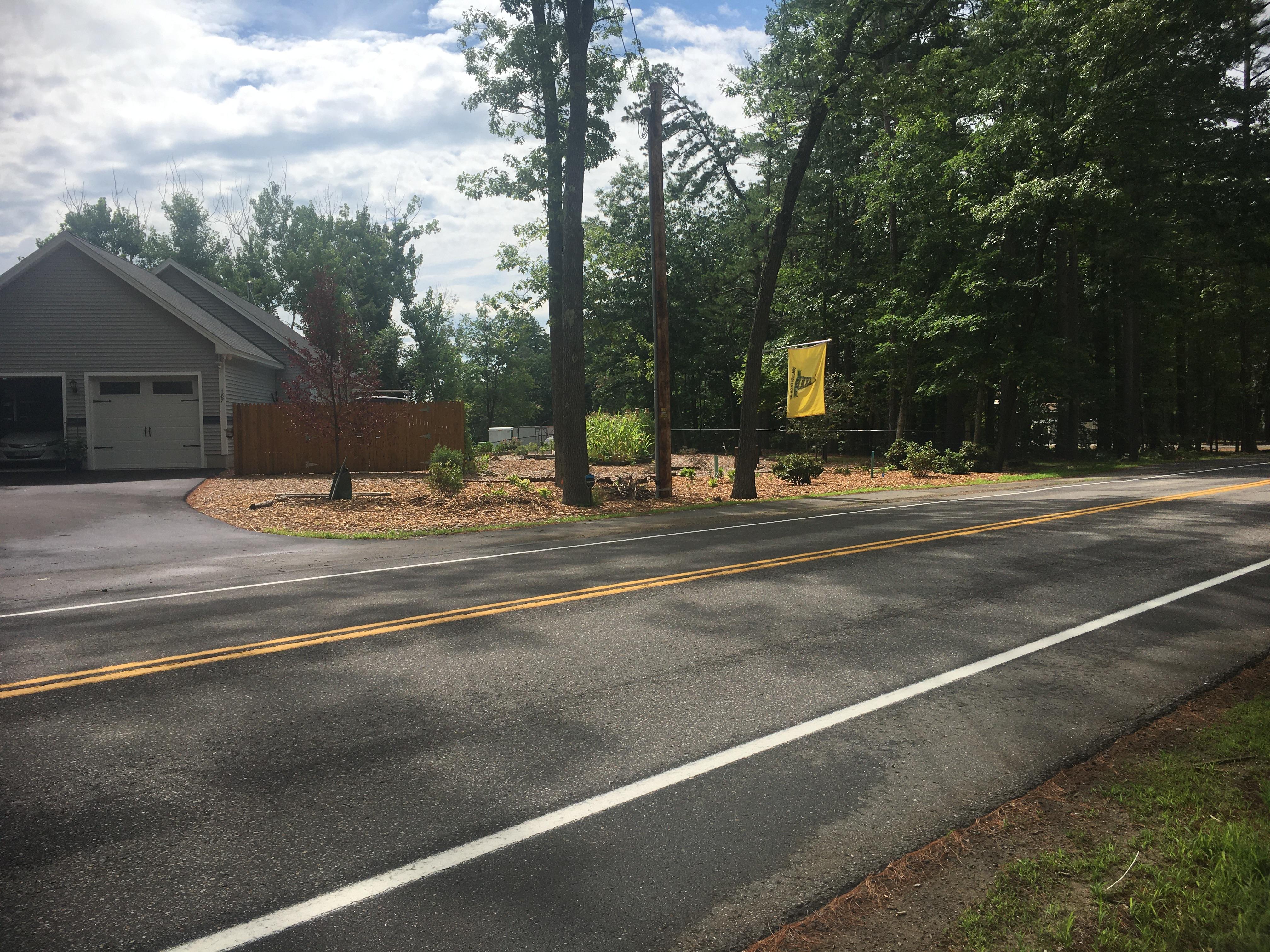 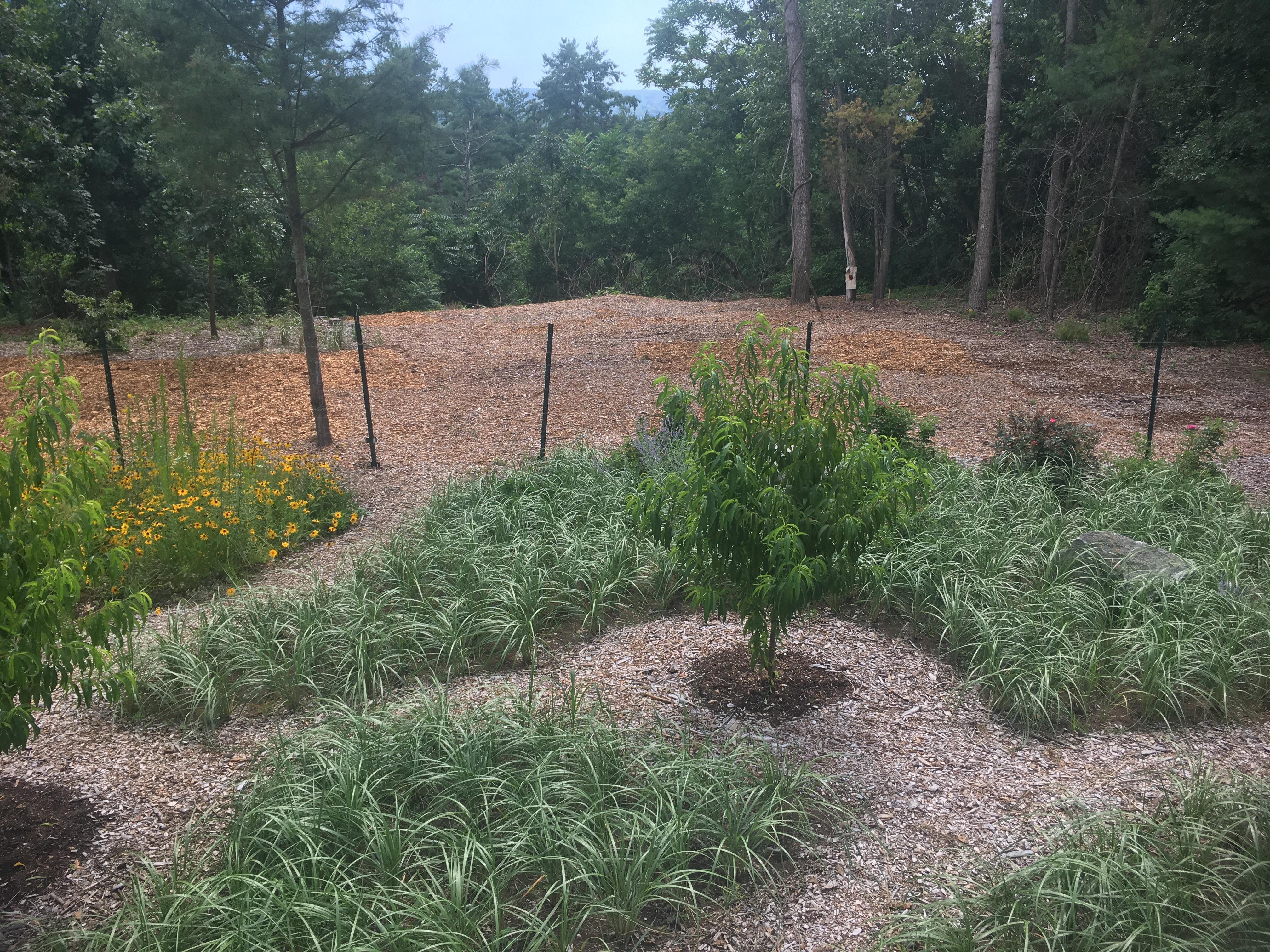 Back of our property overlooking a 90′ steep drop down to the river. In the foreground is our fabulously successful beach grass experiment planted as plugs last fall. It has stopped the erosion and grows in sand where nothing else will. In the background is our land reclamation project (about 2000 sq. ft.). We’re hoping that the 13 invasive species will be killed by the darkness and smothering and give us a place for more fruit trees next summer. 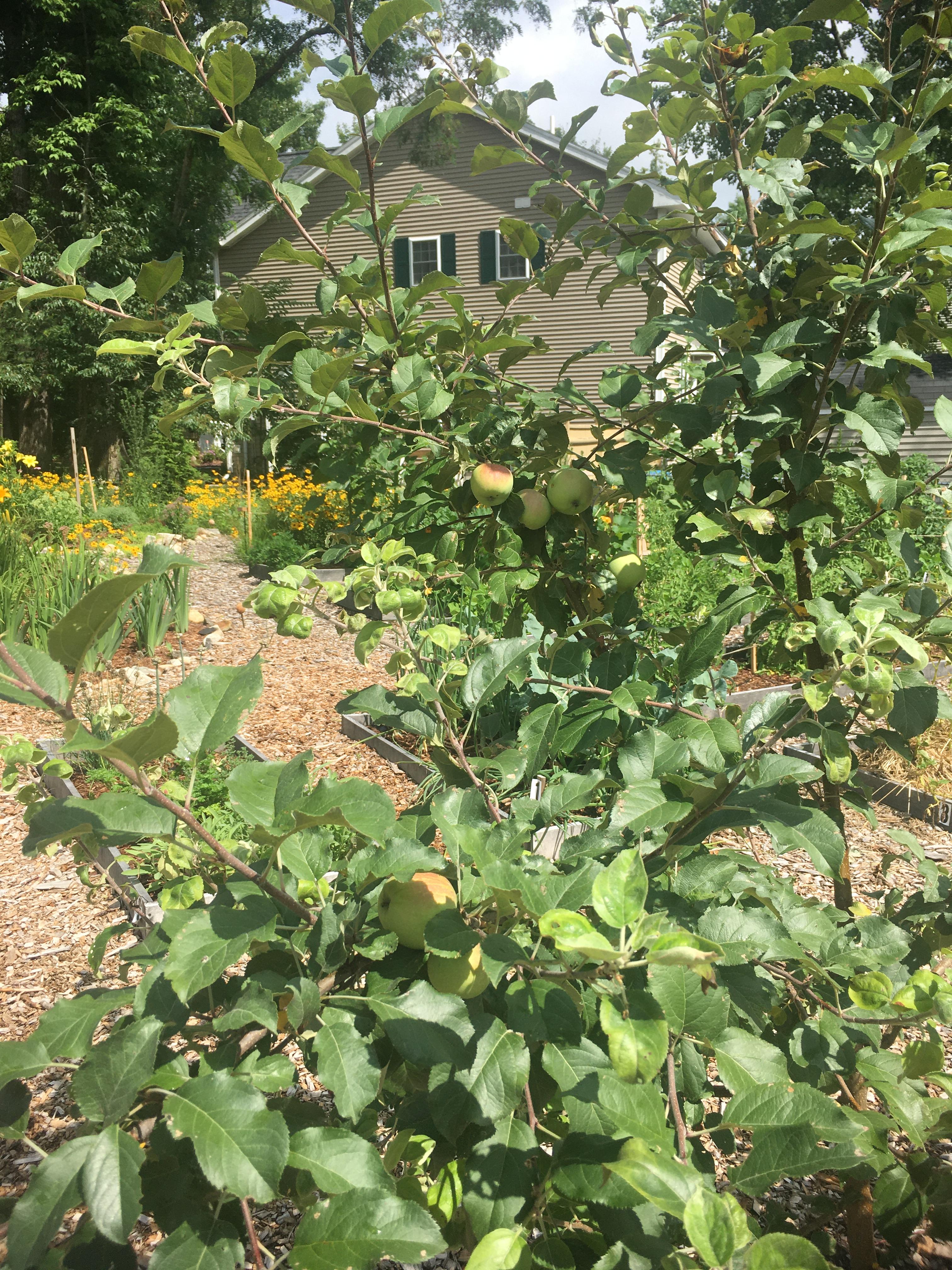 We’re surprised our fruit trees are producing so fast.  We’re going to have dozens of apples and peaches, even though we thinned them out. The birds and chipmunks got every single one of the cherries.