Once again we have been treated to a form of news spin that borders on propaganda.

This time the information comes from the National Association of Realtors, or NAR, a group which long ago fell out of my favor for their tendency to churn out poor quality sampled “data” that was invariably out of step with reality by being overly positive.  Errors happen, but when they are always in one direction, they cease to be random errors.

After the NAR put out an uninterrupted string of misleading data during the popping phase of the housing bubble you might think that the US media would be a little bit more cautious running NAR “data” without providing some sort of context or caveats. You’d be wrong.

NEW YORK (CNNMoney.com) — Is the housing meltdown ending? Pending home sales rose in March for the second consecutive month and are up year over year.

The consensus forecast of industry experts polled by Briefing.com had predicted no increase in the index.

As noted here previously, existing home sales always rise between February and March. Always. That would be indicated by the black lines in the chart below (which has not yet been updated for the March 2009 data). 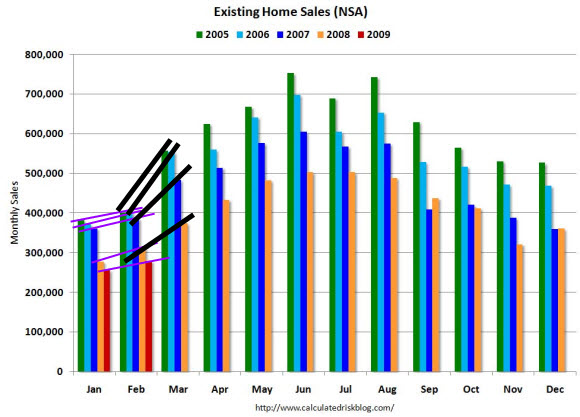 I am at a loss to figure out which “industry experts” had predicted no increase in the index for March over February.  If I can figure out who these experts are I will send them this chart in the interest of helping them improve their craft.

Of course as readers of this site know the name of the game is not “accuracy” but rather “beat by a penny” which refers to creating a positive spin on any data no matter how bad it really is.   By setting expectations so low that they are sure to be beaten, a positive and bullish response can be elicited in the financial markets by the “unexpectedly good news.”

It also bears noting that the NAR data we are discussing here was for something called “pending home sales” whereas the chart above is for existing home sales. The difference is that pending home sales is a sampled measure of contracts signed which then turn into home sales typically after a 45 day delay.

However, if done well, these two indexes (sales and pending) should line up quite nicely with a small offset of ~45 days.

Another problem with the pending home sales is that the data includes foreclosures and distressed sales and because of this has, in the past, correlated poorly with actual increases in home sales.

As far back as last August, at least one journalist (Rex Nutting of Martketwatch) caught onto this phenomenon and I thought we’d perhaps moved past the stage of being confused about the reliability or trustworthiness of the Pending Sale index:

The realtors’ pending home sales index rose 5.3% in June, a signal that the number of sales closed in July should be higher.

The index is supposed to forecast actual sales a month or two ahead; in the past seven months, the pending index has correctly forecast the direction of actual sales in the next month, if not the magnitude of the change.

Signing a contract to buy a home is not the same as actually buying it. Many sellers may be desperate to accept any bid, no matter how unlikely it will be that the buyer will get financing.

The reason that the bolded sentences are so important here is because the number of foreclosures and distressed sales are a much higher proportion of pending sales than they were a year ago and because loans are much, much harder to get these days, especially with the new 20% down requirement that many lenders have recently implemented.  While I have no doubt that home sales will pick up at some point in the future, I am also confident that there will be a few "false starts" along the way.

Knowing when real, organic house buying is on the upswing requires knowing something about the proportion of foreclosure and distressed sales vs. "real" sales.  For some reason this information is not well publicized nor talked about.

Seeking this information I read 5 separate articles in five different quality publications today about the NAR pending sales number and not one included this information and none inserted any sort of a qualifying statement about the limitations and past failures of the index.

Instead we saw statements of opinion such as this one in Bloomberg:

“People are worrying a bit less about a depression and starting to see signs of recovery,” said James O’Sullivan, a senior economist at UBS Securities LLC in Stamford, Connecticut.

At this stage the absence of any caveat or alternative opinion is a red flag for me.  We know enough about this data to properly explain its limitations and past failures yet that is rarely done.  By leaving this information out I question the intent and the motives of the publication.

The reason I care about this is because I hold a belief that it was a similar tendency to feed ourselves a diet of poor information that led to this crisis in the first place.  I am at a loss to understand how continuing this pattern serves us at this stage.

But spring is in the air and “green shoots” are on the menu so I say let’s enjoy the optimism while it lasts. For those who kicked themselves for riding their stock holdings down, this is a great time to lighten up.

Consider it a gift from the folks over at Spin-Cycle central.