Sometimes you really do find enlightenment at the top of the mountain.

I spent this week hiking in Montana’s Bitterroot mountain range, as a participant in the pilot run of a new personal-growth-through-adventure-travel startup.

In our group was a famous professional cyclist, who had been a superstar on the Tour de France for many years.

He has a fascinating life story, both on and off the bike. His tales of the super-human efforts required to prevail at the most elite level of this punishing sport are mind-blowing.

The relentless and gruelling training covering thousands and thousands of kilometers. The near-starvation state cyclists exist in to maximize their power-to-weight ratio. Endless travel. Horrific crash injuries. Sponsor pressures. The money and politics driving the sport. Overbearing regulators. Cut-throat teammates. And of course, the pervasive doping.

When we asked him how he managed to persevere at the top of such a demanding sport for so long, despite the huge toll it took on his health and his marriage, he thought for a moment then said: “I suppose I’m just really good at suffering”.

It’s clear that, in addition to some truly amazing experiences, his cycling days have left him with a legacy of damage that he’s still working through.

As he shared this with us, one participant wisely advised him to remember: Pain is inevitable; but suffering is optional.

Yes, he’ll still need to deal with the aftereffects of his racing years. But it’s up to him how much power he wants to give them over his happiness and life path from here.

From Mountains To Markets

I’m struck by how relevant the above advice is to investors right now.

It’s becoming increasingly clear that the end of the ten-year bull market has arrived.

As we’ve been warning in recent reports, the fundamentals show a global economy sliding into recession. And the technical charts show a dangerously bearish triple-top in the markets, with all of the major indices punching decisively below the (again bearish) rising wedges they’ve been making for months.

The chart below from Sven Henrich presents a compelling argument that, using comparable measures from the 2001 and 2008 market routs, the S&P 500 has a very real risk of dropping in half within the coming year: 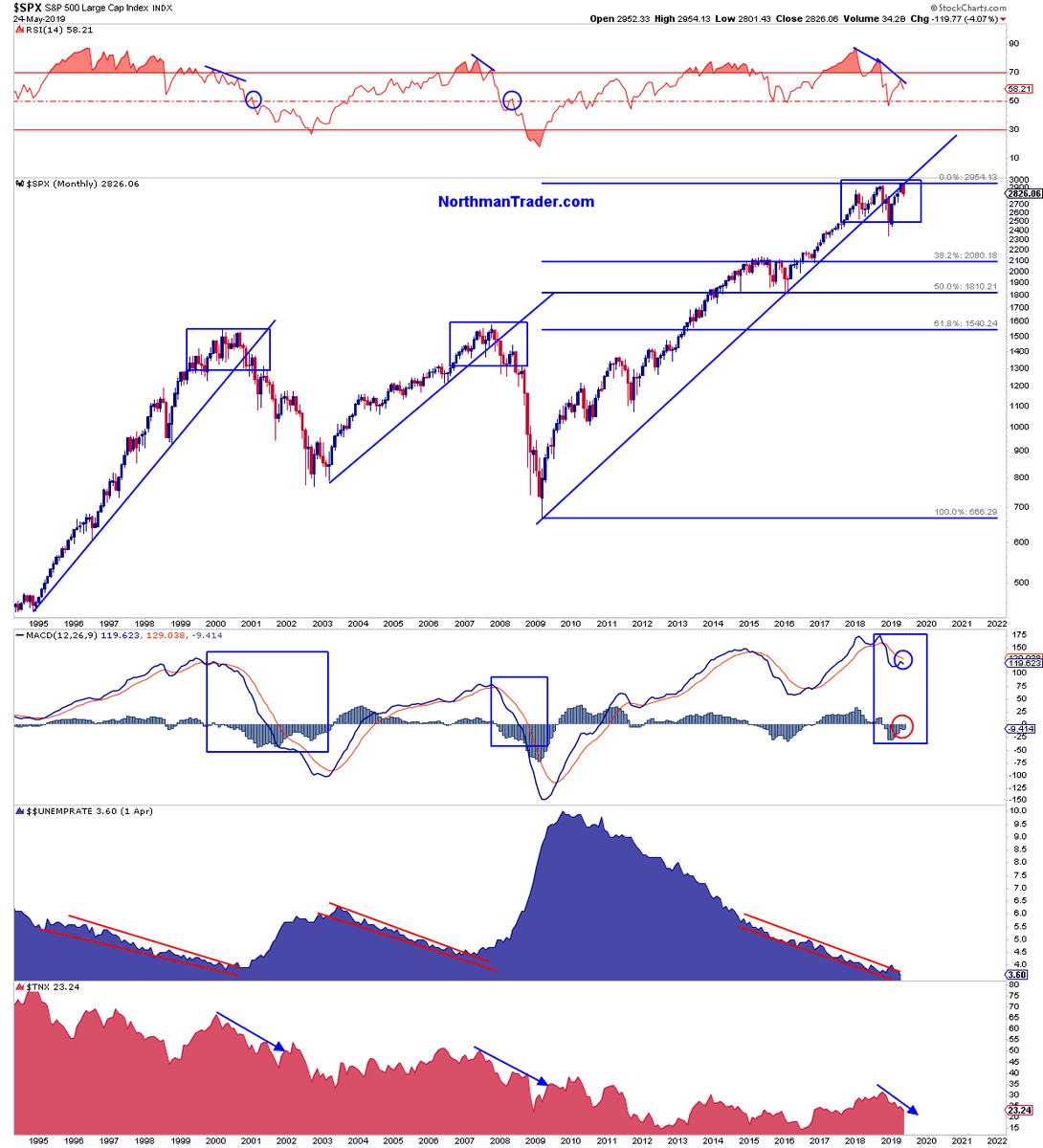 In March, I shared a trade I was making in my own portfolio given how dangerously overvalued the Tech sector has become. That trade initially performed poorly as the market stumbled higher for a while longer, but is now up 13%.

The incessant jawboning and cheerleading of the Federal Reserve and the Trump administration no longer works the way it once did. The market wants results — progress on trade talks, real revenue and earnings growth. Mere words are no longer enough to boost prices.

Perhaps nobody understands the current dynamics in play better than David Stockman, former head of the Office for Management and Budget under President Reagan, former US Congressman, and former private equity investor.

Stockman not only knows how the power players run the game, he knows many of them personally and understands their motivations, capabilities and weaknesses.

So concerned that he asked us to produce a webinar for his website’s followers in which he (and we) laid out where the biggest risks currently lie, why the markets are so vulnerable to a major correction at this point, and most importantly — what steps concerned investors should consider taking right now (i.e., before stocks fall).

The webinar’s underlying message is the same as above: Pain in the markets is inevitable at this point, given the extreme distortions and intervention over the past decade. But Suffering is not. You can position yourself prudently today to minimize/avoid losses, and potentially even profit from a coming market downturn.

We’re pleased to make the replay video of this important webinar available to you here. Make the time to watch to watch it soon (1h:54m):

To get the most out of this webinar, be sure to schedule the free portfolio review offered within it, and download both David Stockman’s charts (here) and Chris Martenson’s charts (here) from the presentation.

And remember that you future depends on the choices you make today. Choose to avoid unnecessary suffering and take prudent action now.