With the launch of the new book, Chris has been busy delivering the Three E message to a media slowly awakening to the severity of our predicament. Recent world developments (spiking silver/gold/oil/food prices, a plummeting US dollar, renewed PIIGS debt concerns, MENA unrest, and Japan’s woes, to name just a few) are sobering signals that we are far into the timeline that the Crash Course has predicted.

I thought I’d compile some of Chris’ more recent and notable media appearances for those who may not have seen them yet.

This morning, BNN – Canada’s Business News Network – aired this interview with Chris discussing the implications of the coming energy crunch (click image to launch the video): 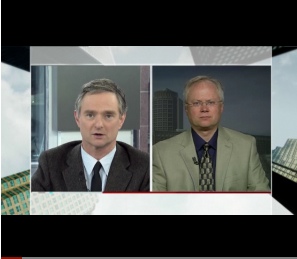 Here are two clips of Chris’ recent appearance on The Daily Ticker on April 5. Host Aaron Task digs into Chris’ thoughts on the impact of recent events in Japan, the Middle East, and Africa:

Earlier his week, Max Keiser has an energetic discussion with Chris on the recent Fed actions and the extreme pressure being placed on the US dollar (Chris’ segment starts at 13m:25s):

On April 14th, Chris sits down with David for a wide-ranging talk covering Wall Street corruption, the national budget, Japan, peak oil and the outlook for the economy:

On Friday, April 22, Chris gave an updated presentation of the Crash Course at a book signing at the Northshire Bookstore in Manchester, VT (Chris’s part starts at 3m:20s):

Here’s an interview Chris had with Jim Puplava back in February on preparing for Peak Oil. A head’s up: Chris will be Jim’s featured guest next week for a segment dedicated to the new book and Chris’ outlook on where things go from here:

In addition to these, there have been a number of radio and live appearances. We’re doing our best to get the message out while there’s still time left for prudent preparation. And if you have any media contacts to send our way – please do so! Just email [email protected].

We’ll keep you posted of more of Chris’ appearances as they happen.