Welcome to June, and welcome to this week’s edition of "In Session."  As always, if you have anything left over from last week that you’d like to discuss this week, copy it on over or post a link back and we’ll see about getting to it.

This week, I am still tuned into some confusing cross-currents in the world of bonds, specifically US Treasuries, that I do not yet understand.

First, there was this dire warning late last week about the re-emergence of the dreaded "bond vigilante," which had gone into hiding for more than a decade:

For the first time since another Democrat occupied the White House, investors from Beijing to Zurich are challenging a president’s attempts to revive the economy with record deficit spending. Fifteen years after forcing Bill Clinton to abandon his own stimulus plans, the so-called bond vigilantes are punishing Barack Obama for quadrupling the budget shortfall to $1.85 trillion. By driving up yields on U.S. debt, they are also threatening to derail Federal Reserve Chairman Ben S. Bernanke’s efforts to cut borrowing costs for businesses and consumers.

The 1.4-percentage-point rise in 10-year Treasury yields this year pushed interest rates on 30-year fixed mortgages to above 5 percent for the first time since before Bernanke announced on March 18 that the central bank would start printing money to buy financial assets. Treasuries have lost 5.1 percent in their worst annual start since Merrill Lynch & Co. began its Treasury Master Index in 1977.

“The bond-market vigilantes are up in arms over the outlook for the federal deficit,” said Edward Yardeni, who coined the term in 1984 to describe investors who protest monetary or fiscal policies they consider inflationary by selling bonds. He now heads Yardeni Research Inc. in Great Neck, New York. “Ten trillion dollars over the next 10 years is just an indication that Washington is really out of control and that there is no fiscal discipline whatsoever.”

According to this report, there’s some pressure being applied by the bond market to the grand plans of the government deficit spenders and the Fed monetizers.

But then I wake up and read this next report, which really makes me scratch my head:

Treasuries, Dollar ‘Only Game in Town’ as China Buys (Update3)

By Daniel Kruger and Susanne Walker

June 1 (Bloomberg) — For all the hand-wringing over the dollar’s slide, the expanding U.S. deficit and the nation’s AAA credit rating, the bond market shows international demand for American financial assets is as high as ever.

The Federal Reserve’s holdings of Treasuries on behalf of central banks and institutions from China to Norway rose by $68.8 billion, or 3.3 percent, in May, the third most on record, data compiled by Bloomberg show. The Treasury said bidding from foreigners was above average at its $101 billion of note auctions last week.

Apparently foreign central banks snapped up more than two-thirds of the most monstrously large Treasury auction on record.  I am quite perplexed by this for two reasons:

Given their own troubles at home and the multiple reasons that a sane person would not want to buy Treasuries right now, I am mystified by these foreign purchases of US debt.

I thought that the disconnect between how you and I might see the economic world and how central banks see it was perfectly captured by the audience’s reaction to statements made by Timothy Geithner on his recent trip to China:

BEIJING, June 1 (Reuters) – U.S. Treasury Secretary Timothy Geithner on Monday reassured the Chinese government that its huge holdings of dollar assets are safe and reaffirmed his faith in a strong U.S. currency.

A major goal of Geithner’s maiden visit to China as Treasury chief is to allay concerns that Washington’s bulging budget deficit and ultra-loose monetary policy will fan inflation, undermining both the dollar and U.S. bonds.

China is the biggest foreign owner of U.S. Treasury bonds. U.S. data shows that it held $768 billion in Treasuries as of March, but some analysts believe China’s total U.S. dollar-denominated investments could be twice as high.

"Chinese assets are very safe," Geithner said in response to a question after a speech at Peking University, where he studied Chinese as a student in the 1980s.

His answer drew loud laughter from his student audience, reflecting scepticism in China about the wisdom of a developing country accumulating a vast stockpile of foreign reserves instead of spending the money to raise living standards at home.

Laughter is, of course, the perfectly rational response to Timothy’s banalities about the safety of Chinese assets when parked in the currency of the country most responsible for the current crisis and leading the way in terms of fiscal and monetary recklessness.

I find it telling that regular people find his statements ludicrous and laughable, yet the policy folks seem to have no clue as to how far off the reservation their actions and words appear to the average person.

Maybe some Chinese students have tipped Timmy off in this regard?

Finally, I am squinting suspiciously at the bond market itself.  The moves there lately have been quite dramatic, with gaps and reversals all over the place.  Looking at the past five trading days is enough to make one recall the Tacoma Narrows bridge incident. 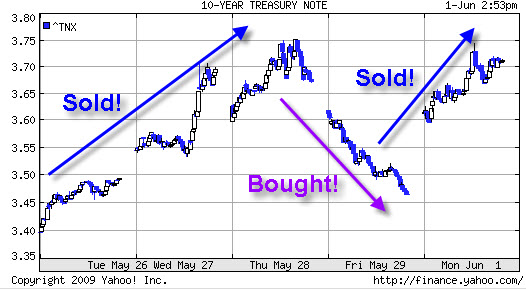 Stocks are for show and bonds are for dough.  This bears watching.