If you read my recent blog post on existing home sales, you may experience déjà vu reading this one. My point in exposing the ways in which “news” is spun to the positive, instead of realistically, is to help you see the ways in which we are still being systematically misled. I consider this to be important to reveal because while problems are still being identified, realism is more important than optimism.

Would you tell an overweight man with chest pains that “it’s probably heartburn and that most people are just fine after experiencing chest pains” or would you advise them to obtain a careful examination of their condition?

Here, we are going to give the patient a close examination.

As I am typing this, the stock market is rallying as it basks in some very favorable news on New Home Sales. Here’s the news:

NEW YORK (CNNMoney.com) — Sales of newly constructed homes unexpectedly rose in February, rebounding nearly 5% after sinking to the lowest level on record in January, according to a government report released Wednesday.

Once again, we’ll examine this “unexpectedly” claim by using another excellent chart from Calculated Risk (I love that site!). This time, again, we will note that New Home sales nearly always rise in February as compared to January. 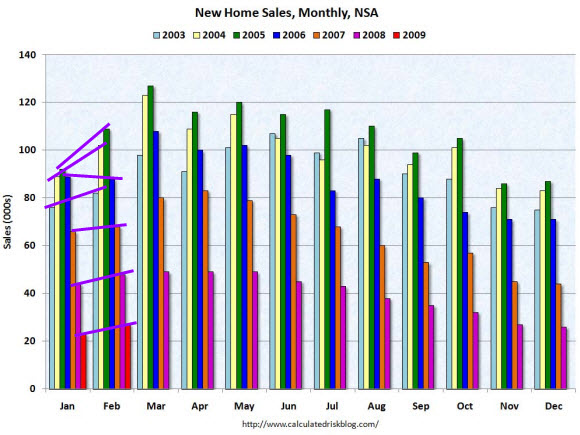 See those purple lines? Nearly every one of them slopes upwards from left to right. Six out of seven of them. And even the 2006 number might be a bit off because it looks like some of the February activity might have slipped into March. [Edited by CHM at 2:00 3/25/09 to reflect my oversight of the 2006 purple bar]

This means that February quite ordinarily and usually has greater home sales than January. Just like we discussed before.

We might also note that this February is waaaaaaaaayyyyyy below any prior February. Further, from a second chart at Calculated Risk we can observe that this February’s New Home sales is the lowest ever recorded since records started being kept in 1963. 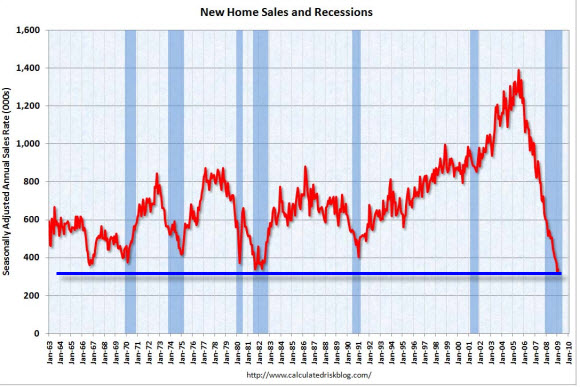 Yet here’s how this information was summarized in the CNN.Money article linked to above:

Wednesday’s report was the latest in a series of better-than-expected readings on the housing market.

So is this news really “better than expected” or is it the “worst new home sales data on record”?

Before you answer, I want you to consider the source of the data itself. The Census Bureau collects the new home sales data but they are notorious for two practices. The first is that they DO NOT subtract cancellations from the data series. That is, they count as “sales” any and all contracts signed to buy a new house. Many of those, recently 30% to 50% depending on the builder and region, are canceled prior to completion and are not actually sold.

The second is that their “sampling methodology” is so error prone that they have to put a very wide range on their pronouncement. Where you read in the news “4.7% gain!!!” here’s the reality:

The margin of error, meaning that the Census Bureau is only 90% sure that the reported figure lies somewhere within this range, is plus or minus eighteen point three percent.

Certainly I would personally never report something as 4.7%, implying precision to the first decimal position to the right, when I was only 90% sure that I was accurate two full spots to the left of the decimal point.

Once again, I must regretfully conclude that the same sort of accounting shenanigans that I have been consistently decrying over the past 5 years are alive and well and on full display down there in DC even today.

While I am an optimistic person for a lot of reasons, I do not share an affinity for false optimism based on Fuzzy Numbers that so many in DC and the mainstream press seem to cling to.

I prefer a blend of realism and optimism that come together around a true understanding of the problems as they are actually configured, not as we might wish them to be. If the patient is sick, let’s find out why and not delude ourselves.