Okay, this is really just desperate and sad. No I am not referring to my fixation on parsing government numbers, although I suppose I could be, but instead to government statistical wizardry and the press’ unquestioning rhetorical support for these tortured numbers.

First up, here’s the verbiage:

WASHINGTON (Reuters) — New orders for long-lasting manufactured goods unexpectedly rebounded in February, rising for the first time in seven months, according to a government report on Wednesday that could bring some cheer to an economy mired in recession.

Here’s the NY Times’ opening take on the situation:

In a glimmer of surprisingly upbeat economic data, manufacturing orders for goods like metals, machines and military equipment rose last month for the first time after six months of declines, the government reported on Wednesday.

That’s quite amazing. Durables “unexpectedly rebounded,” bringing the cheer of “a glimmer of surprisingly upbeat economic data” to an economy mired in recession.

Well, it turns out that there’s another little game that is frequently played with these numbers and it’s called “the downward revision.” The game is played like this: In a prior month, in this case January, a slightly “better than expected number” is posted, causing the stock market to react with glee (at least temporarily).

Later on, that number is adjusted wildly downward, thereby creating a lower benchmark to “beat” next time, hopefully causing the stock market to again react with glee. I’ve been watching this “beat by a penny!” game played for years with both earnings announcements and government releases. The funny part is, it works every time. A friend of mine has dogs that he prefers to lock away in a back room when guests come, and he fools them into willingly entering that room with treats. It, too, works every time. That’s my mental image for this process.

At any rate, here’s the game in more detail. The first thing is to set the “expected number” off of the original reported number. In the example below I have arbitrarily set the baseline durables number to “100” for demonstration purposes.

As you can see below, the reported January number was “95.5” in this example and then economists set their consensus expectation for a final reading of 94.4 which was a minus 1.2 percent decline from 95.5.

Now that the expected reading of 94.4 has been set, the next task is to then lower the bar so that it can be easily beaten. Below we see two rows of example data. The upper row reflects the fact that the January data was revised downward somewhat heavily, to minus 7.3 percent. The lower row shows how the February data beat that revised number by 3.4%, which led to all the happy articles quoted above.

But with sharp eyes, we might note that if economists expected a reading of 94.4 but we got a report of 95.9, this only represents a difference of 1.6%. This is a LOT lower of a difference than the reported difference between minus 1.2% and plus 3.4% which is a gap of 4.6%.

Then the surprisingly cheery gain evaporates into statistical insignificance.

Put graphically, the “cheer” reported by the media seems comical and overreaching, and possibly desperate and sad. I’ve taken the liberty of using a red arrow to point out the source of cheer. 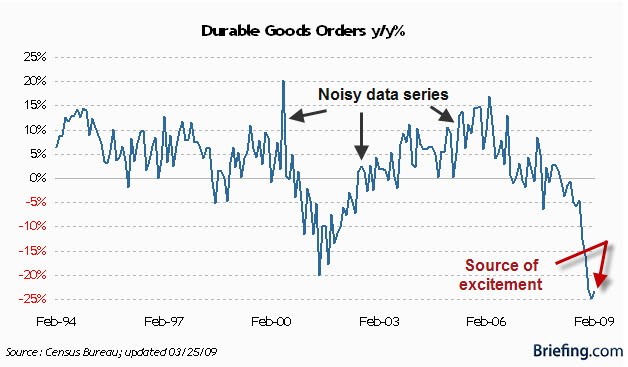 It also bears noting that the durables number is a very noisy data series, and any and all monthly “wiggles” are really not worth focusing on. The year-over-year change, however, can be quite revealing.

On that front, February 2009 orders were down 28.4 percent from the year prior.

One might question how an economy based on exponential expansion will fare with such a wrenching downward adjustment, instead of the expected and preferred percentage gains.

Also, one might wonder how Jiminy Cricket has managed to sneak into so many press rooms all at once.