Well, I thought that I had seen some fantastic data manipulation in the past, but today’s release of the May employment report by the BLS was a real keeper.  It is one for the books (the forensic accounting books, specifically).

NEW YORK (CNNMoney.com) — Job losses slowed dramatically in May, according to the latest government reading on the battered labor market, even as the unemployment rate rose to a 26-year high.

What spectacular news!  Stock futures vaulted, gold killed, the dollar rebounded – all in all a very favorable set of market outcomes that are certainly welcome in the marbled halls of DC and on Wall Street.

The problem is that this huge surprise to the upside is completely out of line with other sources of data and depends (once again) on an incredibly suspect boost from the Birth-Death Model.  Let’s start there.

In the chart below, you are looking at the number of jobs that the BLS has "modeled" to have been created.  These are either added to or subtracted from the total that is reported and trumpeted across the financial-media spin machine.

I want you to note the blue arrows, which reveal that 43,000 construction jobs were somehow added in the month of May, along with 77,000 "leisure & hospitality" (hotels and parks and such) jobs and even 7,000 financial services jobs (I bet there are more than a few banking industry folks wondering where those might be!). 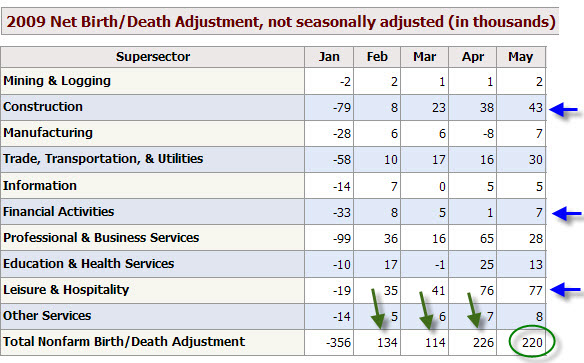 Now I don’t know about you, but in my neck of the woods, this year is much darker on the job front than last year.  Every piece of data I am reading suggests that this is a national phenomenon.  How many jobs were "modeled" and added last May?  Only 176,000.  So we might ask ourselves, again, what sort of a model is it that can find a way to add 25% more jobs this May than last May?  What exactly are the inputs that feed this model?

One clue can be divined by looking at this chart of past Birth-Death job additions for the month of May, stretching back to the start of the decade. 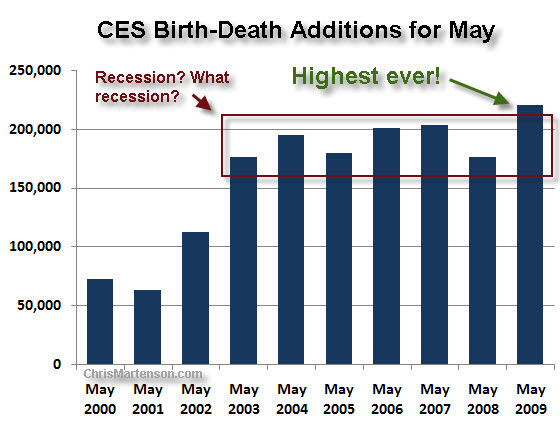 Looking at the chart above, we might note that the Birth-Death model ramped up its additions from 2000 to 2004 and now seems "pegged" in a very narrow band.  Equally odd is the observation that the model’s output is impervious to both growth and recessions.  Even more oddly, we might note that over the past ten years it is this May that has the highest modeled "addition" of them all.  How does this jibe with your sense of things?  Do you feel dizzy when you try and compare your experience with this data?  That dizziness is due to cognitive dissonance.

Another private source for employment data comes from ADP, which is a payroll processing company that services a very large number of businesses.  I haven’t been the biggest fan of the ADP data, especially since they started revising their methods to more closely track the BLS releases.

As Barry Rithotz so accurately put it a while ago:

ADP has their own proprietary data sources; they track employees (new and existing), they can track payroll dollars (total gains and losses, and per employee changes), off of the actual payroll checks going to employees. Why try to imitate the BLS output each month? ADP can create a very specific set of reports that ARE PURELY DRIVEN BY THEIR OWN PAYROLL RECEIPTS, that stands on its own.

Why even bother messing around with trying to imitate or forecast BLS data?

The BLS Non-Farm Payroll numbers are somewhat flawed, subject to massive revisions, and fatally flawed due to how the Birth Death adjustment has been applied.

If ADP wants to contribute something valuable, they should stop trying to forecast BLS, and instead generate their own, proprietary, data driven monthly NFP numbers.

With that said, here was the ADP estimate for May:

Nonfarm private employment decreased 532,000 from April to May 2009 on a seasonally adjusted basis, according to the ADP National Employment Report®. The estimated change of employment from March to April was revised by 54,000, from a decline of 491,000 to a decline of 545,000.

The interesting part is that the ADP number does not include government workers, so I would have expected the BLS release (which does) to have tracked lower, not higher, than the ADP data.  I say this because every state I have looked at has either cut or frozen government jobs.  Yet the BLS report estimated that only 7,000 government jobs were lost across the entire country, which is mysterious, since quite a few of the temporary census jobs were terminated in May.

And not just a few either:

TOWNSHEND, Vt. (AP) — For weeks, Greg Noel roamed the spine of the Green Mountains with a handheld GPS unit, walking dirt roads and chatting with people as he helped create a map of every housing unit in the United States.

Work was good: The sun was out, the snow was gone and the blackflies hadn’t begun to hatch. But now that work is over and Noel, 60, and more than 60,000 other Americans hired in April to help with the 2010 census are out of work once more.

Given that 60,000 temporary census jobs went away, I am at a loss to figure out how all the other government hiring and firing collectively added up to a 53,000 job gain to secure the final -7,000 reading.

As before, my assumption is that these numbers are quite fuzzy, not worth the paper they are printed on, and heavily falsified to achieve narrow political and market influencing aims.

While I can certainly understand, and even find some compassion for, the desire to manipulate the data to inject some confidence and optimism into the populace and markets, I must regretfully conclude that such efforts are more damaging than helpful.