All of a sudden, Tesla (TSLA), the lead stock of the current massive market rally, is faltering — down nearly $250/share (14.3%) since yesterday’s open:

This is important because Tesla embodies the faith, optimism and exuberance that has been required by investors to support stock prices up at their current levels — which by nearly every conventional measure are now more overvalued than at any prior time in history.

As just one example, the chart below shows that the total market cap of US stocks now exceeds US GDP by over 155%, an all-time record: 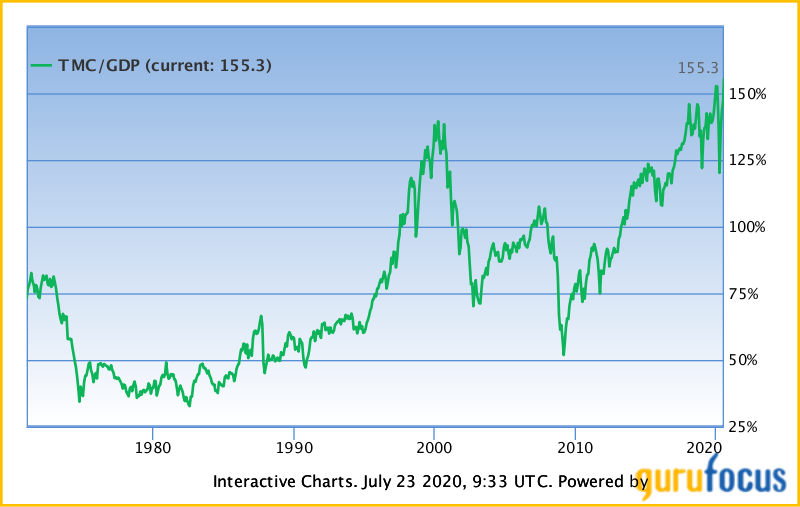 With the stock down nearly $400/share since the all-time high price of $1,800/share hit last week, there are now many recent TSLA investors sitting on painful losses. Especially those who bought call options, which have been purchased by an insanely large number of novice investors in Tesla of late.

Only one thing ends bull markets, and that’s change in sentiment. The sudden painful reversal of a bellwether stock like TSLA, leaving shocked and injured investors in its wake, is exactly the type of trigger that could terminate the mania that’s been driving stocks since April.

In this week’s Market Update video, we interview Jim Bruce, producer of the excellent documentary film Money For Nothing about the Federal Reserve’s role in creating the Great Financial Crisis, and who is now working on a new documentary about Tesla. Given his expertise, few people are better positioned to opine on the market environment we now find ourselves in than Jim.

Whether it’s regarding faith in the Fed or faith in story stocks like Tesla, we’re at the point where to continue the status quo, everyone must believe the hype. But what if the hype is a false promise?

Well, with Tesla stumbling and threatening to take the markets down with it, we may soon find out:

Anyone interested in scheduling a free consultation and portfolio review with Mike and John and their team at New Harbor Financial can do so by clicking here.

And if you’re one of the many readers brand new to Peak Prosperity over the past few months, we strongly urge you get your financial situation in order in parallel with your ongoing physical coronavirus preparations.