Practically every day I post my observations about what is happening in the markets and larger world for enrolled members in the “Martenson Insider” area and then we discuss it.

I’d be delighted if you would consider joining.

After digging around and sifting through the things both said and not said, I have come to the conclusion that what we are seeing are the likely effects of a rescue operation.

By this I mean a large injection of stabilizing cash to one or more parties, possibly related to the recent large bankruptcies.  Two of my friends, who have been actively trading for more than 20 years between them, threw in the towel this week, as their patterns and methods are no longer working.

Their conclusion is the same as mine; this market is not trading like it used to.  It is trading chaotically, counterintuitively, and as if there’s some sort of distorting influence involved.

First, we might just wonder if this isn’t the impact of a rogue firm with entirely too much power moving the market for its own benefit.

When we examine the results of Goldman’s latest quarterly trading results, obviously we have a strong suspect.

Traders at Goldman Sachs recorded only one daily loss in the third quarter, highlighting the trading bonanza sweeping Wall Street as central banks continue to pump billions of dollars into the financial system.

The performance – revealed on Wednesday in a regulatory filing – compares with two losing trading days in the previous quarter and confirms that the authorities’ drive to revive markets after the crisis is yielding huge windfalls for some banks.

Before the crisis, banks regularly recorded trading losses on several days in a quarter.

Goldman made more than $100m in profits on 36 of the 65 days in the three months to September and recorded more than $50m in profit on more than eight out of 10 trading days, the filing shows.

Only one day with trading losses out of the entire quarter?  A 98.5% win-rate?  Sorry folks, this is so far beyond the realm of statistically possible that we must search for other reasons.  There can be no doubt that Goldman is enjoying an advantage not shared by the rest of the market.

Goldman is a company largely housed in a single glass building in Manhattan, vacuuming up $100 million in profits on 36 out of 65 trading days.  $100 million is a lot of money.  It is equivalent to the total earnings of a very successful mid-sized company for an entire year.  One that might employ thousands of people.

But somehow we have a system where a few folks in a glass building are able to skim that amount, day after day after day, without anybody from any regulatory body even blinking.

Remember, in trading, one person’s gain is another person’s losses.  It really strains every fiber in my being to imagine that Goldman’s services to this country are either that good, that fortuitous, or worth it.

Moving on to the markets, here’s what the market has done for the past week, as traced by the S&P 500 futures (which I like because it tells you what’s happening 24 hours a day, not just when the cash market is open): 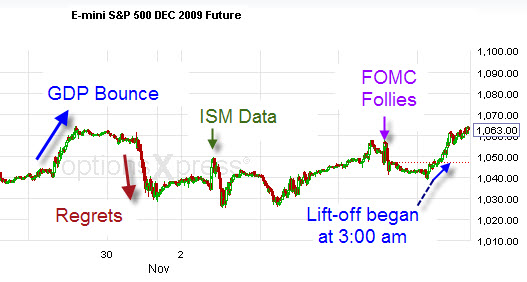 We see the volatility as the market first surged on the GDP report and then slumped the day after.  Then there was a spike on the ISM (mfg) data that also gave up the gains shortly thereafter.  Then we had the FOMC follies where the market looked like an EKG of a heart attack victim for a while before finally slumping away all the day’s gains.

Today’s 200 point Dow spree was said to be due to favorable unemployment data and excellent productivity gains, but if you were watching the overnight futures, you noticed that the lift-off actually began at 3:00 a.m.  As a trader, I am quite familiar with this pattern.  When large futures gains are recorded beginning at 3:00, you can nearly always count on those gains holding through the day.

Inquiring minds would like to know how the future traders seemingly know about the excellent economic news that has not yet been released.  Hello, SEC?  I have a job for you.

Regarding the excellent economic news today, I might note that the market never sells off on an unexpected rise in initial claims, nor should it.  The data is noisy and not worth much week to week.  Further we might note that while the number was less than expected it was still over 500,000; a lousy result by any normal measure.

Nov. 5 (Bloomberg) — Worker productivity surged at the fastest pace in six years, labor costs fell and unemployment claims were lower than forecast, signaling companies may be preparing to start hiring again after cutting costs to the bone.

Looking through this data, we might note a powerful contradiction in the logic.  Why should companies that have just secured a gigantic gain in productivity seek to hire anybody?  I mean a company that has just managed to become more efficient and lean is not about to go out and hire anybody just because.  They will hire people when revenues warrant an expansion, and revenues are still quite depressed.

I should point out that the productivity measure is the worst of the worst in terms of usefulness or reliability.  I hate how it is constructed.  Some of my disdain is probably a holdover from all the years I had to listen to Alan Greenspan trumpet it to rationalize his recklessly loose money policies.  I thought it was bunk then, and I do now.

If you want any further proof that this measure is junk, look at what was reported:

Productivity, a measure of employee output per hour, jumped at a 9.5 percent annual rate in the third quarter, exceeding the highest economist forecast, according to Labor Department figures released today in Washington

At that rate, we’d only need half the workers to accomplish just as much in roughly seven years.  It’s silly, and instead of spending any time wondering at it, we should instead immediately suspect that it is flawed.

Next, it is is a bad thing that labor costs are going down, if you are depending on consumers coming back to the shopping malls.  Lower labor costs means less money going to workers.  That’s not a good sign at this point.

The expansion of corporate profits has come at the expense of workers, and sooner or later we can expect some sort of a revolt – I would guess that the election next fall will see the emergence of one or more populists.

So at this point, I really have no solid explanation for what I am seeing in the market, besides noting that a lot of liquidity is hitting the tape.  Gold remains over $1090 and the dollar is languishing about at ~76; bonds went nowhere today despite a powerful stock market rally.

All in all this adds up to liquidity, and lots of it.

This is one reason that I am not a deflationist yet.  While I have complete intellectual sympathy for the deflation argument as that is what should be happening, I am not yet seeing it in the financial markets.

I have read numerous statements of fact from deflationists that are actually beliefs that really need to be carefully examined. One is, “the markets are larger than the central banks.” I used to believe this too, but now I am less certain.

Thinking back, I recall that the Soviet machine was bigger than the market because it was the market.  It turned out not to be larger than reality, but that’s a different story.  The Soviets simply dictated everything from prices to false production figures until the system collapsed.

The tools of persuasion and market interference at the employ of modern central banks are far more sophisticated than anything the Soviets ever dreamt of.

Are the markets larger than the banks?  I’d like to think so, but I am growing more and more confident that the answer is “no” and that the distorting effects of untold trillions of fiat money can elevate prices for long enough to change people’s minds.

I happen to think that reality is larger than our central banks, but that too is a story for another day.  You can review that thesis by re-reading the paired reports on oil that I wrote in April 2009 (here and here).

Again, I just want to caution you to be ready for any outcome.  I am open to the possibility of an immediate return of crushing deflation, and I am also open to the possibility that the gigantic wall of fiat money will override the deflationary impulses and whisk us into a fast date with high inflation.  Right now the data says that the money masters are winning the battle against deflation.

And not without help from the media – I am simply stunned that Capmark and CIT went belly up and I couldn’t find a single article about either today in a major news outlet.  It is as if they never happened at all.  Sometimes what is not said is just as important as what is said.

This is, without a doubt, one of the most perplexing moments for those interested in wealth preservation.