I hear this a lot these days. Developments are happening too quickly to process for many folks, creating a persisting cloud of confusion.

Take for example, the W.H.O. which as recently as two weeks ago recommended that only sick people should wear masks.  What? We’ve known for months that people can spread Covid-19 when they are asymptomatic.  How can a ‘sick person’ wear a mask if they are sick but even they don’t know that? It just makes no sense.  What is even going on?

The Fed is busy buying distressed financial assets for far more than they are worth from the largest and wealthiest of stock and bondholders.  That absolutely contributes to inequality.

So does juicing the stock market, or ““market”” as I like to term it (because it’s so distorted it needs two sets of quote marks).

So does appointing Blackrock – the world’s largest private asset manager – to select which private assets should be bought with the freshly-invented currency emanating from the Fed’s electronic printing presses.  Should we really be shocked to learn that Blackrock chose their own distressed assets, like the junk bond fund JNK, for the Fed to buy first?

It’s a bald-faced lie for Jay Powell to claim anything other than the Fed is the #1 contributor to inequality.  And that’s by a country mile.

So does Powell even think he can state such an obvious untruth and be taken seriously? And why does no one in the media seriously challenge him on this?

The US government is supposed to be an open-book affair.  The public has both an interest and a right to know what’s going on with its money.

Yet somehow, US Treasury Secretary Steven Mnuchin believes that $500 billion in recent bailout funds shoveled out the door to US corporations both can be and needs to be kept secret: 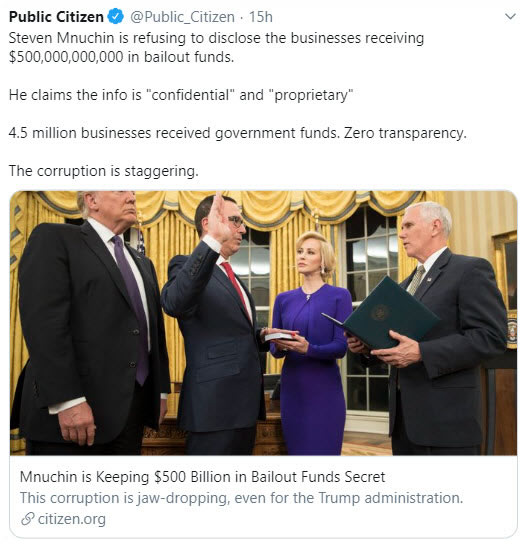 How is this even possible?  How can anybody, let alone a sitting US Treasury Secretary think that it’s okay to keep $500 billion in fund disbursements a secret to the public? What the heck is going on?

But ask the average person on the street? 99 out of 100 won’t have a clue this is going on.

Look, in the US alone, 44 million people have applied for jobless claims over the past 12 weeks.  Over that same time period, thanks to the efforts of Jay Powell and the Federal Reserve, the Nasdaq 100 powered to brand new all-time highs: 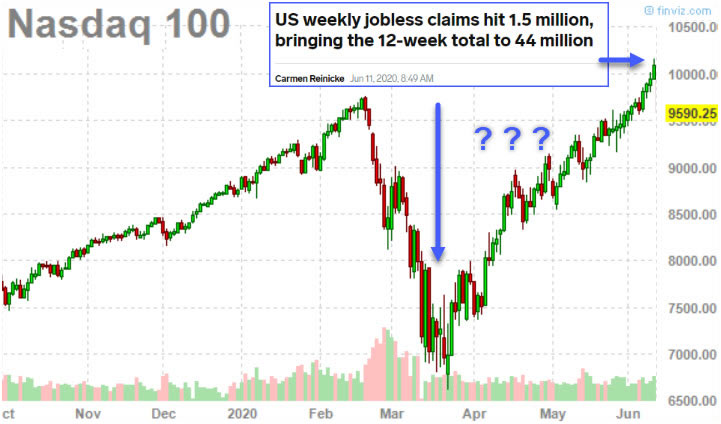 The economy as measured by GDP is thought to have plunged anywhere from 15% to 50% during the quarter…and stocks were not just stable, but positively euphoric over those same 12 weeks, as if gleefully celebrating the largest loss of jobs in US history.

These and dozens of other weird, backwards, and truly unnatural acts are piling up; each difficult to understand on its own. But taken together, they reveal a current era of great uncertainty and upheaval.

There’s really no other explanation other than something has broken and it scares The Powers That Be to the point that they are wildly flailing about with increasing desperate policies, lies, and extreme actions that would have been unthinkable just a few months ago.

The important question to ask yourself at this time is: What am I going to do about it?

For my part, I think that this current shock to the world economic system is too great to simply paper over.  The loss of economic activity as measured by the demand destruction for oil, which remains down some -20% to -25%, suggests very large future disruptions the economy and, more generally, our way of life.  Supply chains will run short of critical supplies and suddenly-blocked money conduits in the financial system imply a cascade of defaults are yet to come.

Nobody is smart enough to figure out in detail what any of that means. It’s just too huge and too complex.

So, what to do about it?  You become more resilient.  If you’re unsure if your paycheck is secure, you save money, begin thinking about ways to trim expenses, and fire up alternative income streams.  Just in case.

If you can’t be certain that the stores will always be stocked with food, you build up a deep pantry and start a garden.  Just in case.

If you doubt the ability of the Federal Reserve and Congress to ‘get it right’ you buy gold, invest in your home, and develop a buy list to execute if or when ‘they’ dial up the deficits, debt levels and money printing to even more ludicrous levels.  Just in case.

If you’ve been relatively isolated but want a community to enrich your life in good times and support you in bad ones, you dedicate more of your waking hours to doing things with and for your neighbors to strengthen those social bridges.  Just in case.

Here’s the thing: nobody knows what’s going to happen next.  Our economy, our machinery of state, and our global supply chains are all interconnected complex systems.   Such systems have two features:

An emergent behavior is something that arises out of the conditions of the system.  Because humans are complex systems, we can use them as an example.

Put one set of humans in a desert with scant resources on and you’ll get one set of languages, culture, art, technology, and beliefs.

Pick up those same humans, drop them onto a lush and moist prairie and eventually you’ll get an entirely different set of languages, culture, art, technology, and belief systems.  The complexity of the ecology and the human species will yield different results under different circumstances.

Even though you know everything there is to know about humans, you cannot possibly predict what will emerge.  You can only observe these things as they emerge.

Similarly, our economy and its key derivatives — such as technology and systems of production and distribution — have emerged from the combined actions of billions of people using immense amounts of fossil fuel energy.

What can we expect from our new reality now that tens of millions of formerly-productive people aren’t working? Nobody knows because it’s unpredictable.  At the same time oil consumption, our primary energy input, is down by a shocking -20%.  What does that mean in terms of changes in behaviors and goods produced? Nobody knows.  We can only observe what emergent activity happens (or ceases to happen) next.

Here’s another thing to know about complex systems – perhaps the most important feature: they owe their complexity to the flows of energy through them.  More energy and they can become more complex.  Less energy and they become less complex, they simplify.

In economic terms, a reduction in energy throughput might manifest as a far simpler arrangement of fewer people working at fewer types of jobs.  Or it might mean fewer sorts of goods being produced and reduced services to choose among.  Again, we can’t know the future details; but the broad strokes can be defined — and ‘simpler’ is one of those broad strokes that comes along with a -20% drop in oil consumption.

Which is why because I cannot predict the outcome, I prepare.

As I’ve mentioned numerous times before, driven by a growing internal anxiety of the increasingly insensible developments around us, I purchased a 182-acre property earlier this year. One I’ve been hard at work restoring into a productive and highly-sustainable family homestead.

It’s time to reveal what I’ve been up to.

In Part 2: Building The Foundations Of  A Resilient Life, I give you a tour of the specific projects and installations my fiancee Evie and I have been busy with this hectic spring. An important goal of mine as we work to fully activate this property’s potential is to produce a body of “how to” content to help guide you and anyone else interested in making their home more resilient.

It’s the only way I know how to make sense out of today’s increasingly insensible world.