For over a decade now, my job has been alerting people — the aware few who will listen — to the massive changes ahead. Many of which are now underway.

Covid-19 has brought these changes to the forefront, serving as an accelerant for many of them.

For instance, the wealth gap was large before Covid, but now it’s massively larger. That’s thanks to the issuance of $trillions in newly-created stimulus by the global central banking cartel (led by the US Federal Reserve).

Rising global temperatures, already well underway, have been goosed this year by the absence of airlines’ vapor trails. These trails had served to bounce a lot of heat back into space as the sun’s rays reflected off of them. But with air travel largely absent, surface heat is now setting records.

The feckless US media remains busy fanning the flames of division. A populace that was already divided and confused pre-covid is even more so today, perhaps dangerously so. I can’t see any outcome besides one half of the US electorate being bitterly disappointed by the upcoming November elections.

It’s been clear for a long while now that the western ‘sickcare’ system pursues money over health. But even I (jaded and cynical as I’ve become) have been shocked by how willing many scientists, doctors and pharma companies are to promote untested and expensive new drugs over cheap, widely available and safe solutions. Far too many people are suffering long-lasting bodily damage or death as a result.

A Covid Health Strategy With Integrity

It has been my consistent position that if we’d had caring, responsible health leaders in the US (and in much of Europe, as well) many tens of thousands of lives would have been saved and millions of covid survivors would have better future health outlooks than they do today.

What would a caring, responsible public health strategy be for tackling the covid-19 pandemic, you may be wondering?

I’m glad you asked. Here’s what I would do if in charge — offered in the hopes that health policy decision-makers either follow these common-sense steps or complement them with even smarter ones.

The need a clear and consistent position that masks are essential in blocking large viral loads from both leaving and entering people’s bodies.

Not this freak show: 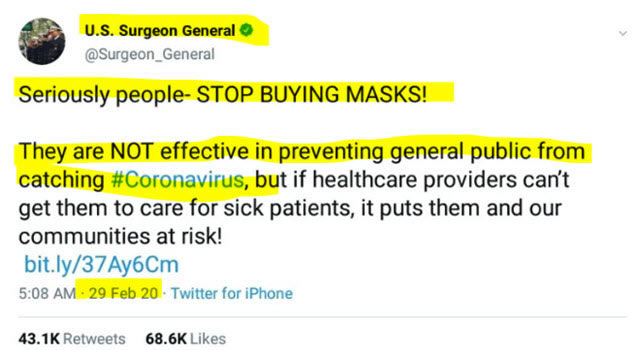 That is an unforgivable and indefensible Tweet.  Similar anti-mask statements have been made by the CDC, the W.H.O. and many hospital systems.  In my judgement, such egregious and erroneous inconsistency reveals a profound lack of personal and professional integrity, to say nothing of the lack of morals on display.

The logic is, and always has been, simple.  A lower viral load (or ‘inoculum’) means your body has a better chance of detecting a viral invader and mounting a defense before the virus gets the upper hand.  A mask on a sick person reduces the quantity of virus particles ejected.  A mask on a healthy person reduces the intake of virus particles.  It’s best if all parties are wearing them during a pandemic. Full stop.

The failure to (a) maintain an adequate stockpile of masks and other essential PPE (b) in the absence of that, advise the use of DIY homemade masks during the temporary shortage and (c) offer big incentives to companies that could have ramped up mask production is collectively one of the greatest health care blunders of the century.

All health authorities from Redfield of the CDC, Fauci of the NIAID, Tedros of the WHO, the FDA, and every equivalent health body from every other country should have been advising people to take zinc, Vitamin D, and an ionophore such as Quercetin. And/or Hydroxychloroquine (upon either exposure to Covid, testing positive or exhibiting early symptoms). Vitamin C and a handful of trace elements and vitamins (i.e. selenium, B-12, etc.) should have also been advised, too.

There’s a vast amount of data from prior outbreaks and peer-reviewed research to support the approach of ‘preparing the terrain’; meaning having people’s immune systems as strong possible to fight a viral invader.  This is especially and startlingly clear for Vitamin D, something I have been publicly advising since April 10th, 2020, based on available science.  It’s manifold benefits are so well-proven that it’s not even remotely up for debate.

That such a campaign for immune system wellness wasn’t pursued, at all, is a massive indictment of the motivations of our so-called health “authorities.”  They don’t deserve that moniker and aren’t even worthy of being called crappy “managers”.  They remained silent on the subject of how people could cheaply and effectively prepare themselves to fight off Covid, and that has led to many millions of people suffering unnecessary and possibly permanent health consequences.

So why wasn’t this done?  I have literally zero knowledge of any US health ‘manager’ advising people to take care of themselves in this way.

By failing to make best use of existing medicines with known anti-viral properties such as Ivermectin and Hydroxychloroquine, in combination with zinc and either azithromycin or tetracycline, hundreds of thousands of needless deaths have happened.

The story is as ridiculous as it is dark.  A perverse system of incentives mostly centered around money, petty politics and inflated egos led to cheap, off-patent medicines being either sidelined or put through studies that were literally designed to fail.

Brave doctors and scientists led the way, suffering enormous reputational damage and professional insults as they published their clinical data from a toxic ecosystem of companies, government agencies and a conflicted, complicit media.

My Youtube video series on Covid, always centered on the science, represents the hardest and most sustained effort of my life.  This series was immediately de-monetized by Google/Youtube, thousands of my followers were unsubscribed and the videos were buried by algorithms that cared more about serving the toxic ecosystem than helping us all get through a pandemic.

Google’s motto once was “Don’t be evil.”  Seems they lost the “Don’t” somewhere along the way.

Working quickly and usually with early or incomplete data, I managed to surface and publicize the importance of both Ivermectin and Hydroxychloroquine early on.  My first mention of Ivermectin was on April 6th 2020.    That’s a very long time ago.  Yet how many studies on Ivermectin have been completed in the US or UK since then?  Zero.

But India has been using this cheap safe drug very successfully. Same for Argentina, which just reported a 0% rate of Covid infection in its front line health care workers. This compares to a 58% positivity rate vs the control group:

Let me repeat that: Ivermectin+ has a 100% rate of success in blocking SARS-CoV-2 infection in the most vulnerable group: front line health care workers.

Meanwhile in the US, no such protection is mentioned let alone recommended by our national health “managers” (who really ought to be fired at a minimum) and no studies have been completed.

Where’s the US media on all this?

Well, they do run heart-wrenching pieces when healthcare workers die. But beyond the “if it bleeds, it leads” dynamic, the media appears otherwise unconcerned or unwilling to report on sound evidence that can prevent future front-line provider deaths.  Here’s an example:

How many mentions in there of the excellent prophylactic work done in India that, if implemented, might save many of these lives?  Zero.  Zero mentions.

This is an enormous scandal and a huge indictment of both US culture and the lack of a proper role for science, logic, and common sense.

Along the way, my Youtube videos on covid-19 have been right far more often than not. They’ve saved lives, truly helped people and have elevated scientific communication about this honey badger of a virus.

Want to guess how many mainstream news outfits have wanted to interview me during the past nine months?  Zero.

However, I’ve been derided in the press quite often. Never with an actual interview first being conducted, mind you –as in this truly shameful Mother Jones hit piece that was never retracted or amended: 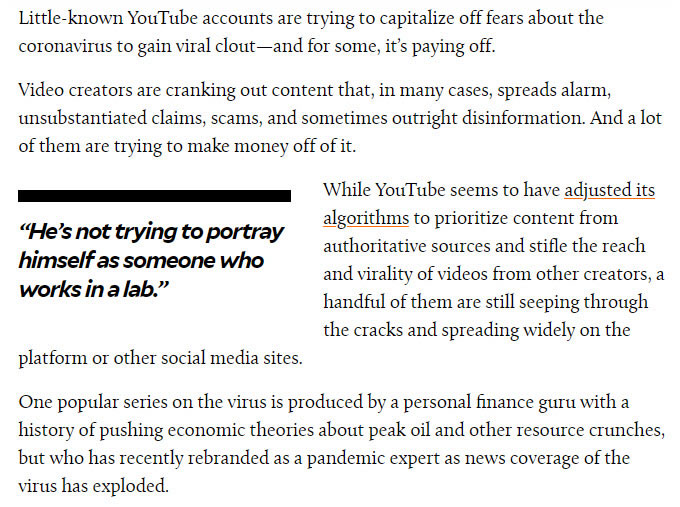 Yes, Mother Jones, which literally got its start following a mission to nurture citizen journalism, is now writing hit pieces on citizen journalists who dare to buck the system.  We’re living in a time of a near universal lack of integrity.

The behavior of the national health managers has been shameful, if not criminal.  They’ve prioritized many things over saving lives and doing the right things.  They’ve promoted bad science and stifled good science.  The press has mostly gone along.

What was it that made me decide to pick up my tools and wade into that shitshow?  I care.  I actually care about people and want to be helpful.

I care about getting the story right, wherever that leads.  I am more than willing to put my reputation on the line.  Heck, I could have gotten everything mostly wrong, and that would have been a disaster to my goal of reaching more and more people with a truly important message.

But I didn’t.  Using logic and a systematic approach to researching fast moving topics, I managed to get the Covid story pretty much dead right from the very beginning.

I raise all of this not to take a victory lap – because there’s really no victory to be had in this sad tale – but because the same elements that suppressed science and killed & sickened people are also overlooking an even larger story.  One that will assuredly impact us all with far more damaging consequences than Covid.

This is the story that I really want to tell.  It’s a story of infinite exponential growth on a finite planet.  It’s a tale rooted in energy; in many ways it’s really the story of Life.

But instead of boy meets girl, falls in love and lives happily ever after, it goes like this: organism finds tasty food source in abundance, organism explodes in numbers, has no plans for when the food source runs out, and when it does things collapse.

It’s not a tale of woe, necessarily although it might turn out that way, but instead one of change. It’s telling us that the next 20 years are going to be completely unlike the last 20.  We have the chance to do better, and live more fully and regeneratively.

Even though the situation may look hopeless at first, I’m filled with hope.  The past is gone, the future is here.  Our opportunity now  is to reclaim our lives and to make of them what we will.

Step one is to disconnect from the old story, which Covid has revealed to be one shot through with fraud, deceit and a profound lack of integrity.  If items (1), (2), and (3) above haven’t convinced you that the old story isn’t worth your time and attention anymore, then I’m not sure what will.

Step two is to thoroughly ground yourself in the data and let it tell its own story.

Step three is to leap into action and to use your big human brain as a tool for regeneration and to create abundance.

In Part 2: Get Ready: Here’s What’s Coming, I reveal my current understanding of the next BIG story – the one I’ve been diligently  before covid-19 deflected me for a while.

There’s a massive energy and economic crisis on the way, and I don’t think there’s anything anybody in power can do about any of it.

Which is why you need to