In our recent reader survey (over 600 completions so far – thank you!), one of the themes coming through loud & clear is: folks would like to see a new version of The Crash Course that is both updated (the original was produced in 2008) as well as condensed (under an hour). We're hearing that an asset like this would be much more effective for penetrating larger audiences that are new to this material, as well as be more "shareable".

How's this for a speedy response?

In case you haven't heard the news yet, Chris will be joining me in Sebastopol, CA on March 4th. While he's here, we're going to take over the local movie theater that night and give folks an advance viewing of a brand-new, not-yet-public, updated AND condensed version of The Crash Course.

After the 50-minute viewing, Chris and I will hold an "ask anything" Q&A with the audience.

We'd love to see you there.

For those that can make it, we're asking folks to consider bringing along at least one friend or family member you think would benefit from becoming more aware about the issues we discuss here at PeakProsperity.com, as we want to get feedback on this new "accelerated" version of the Crash Course from both seasoned and brand-new viewers. 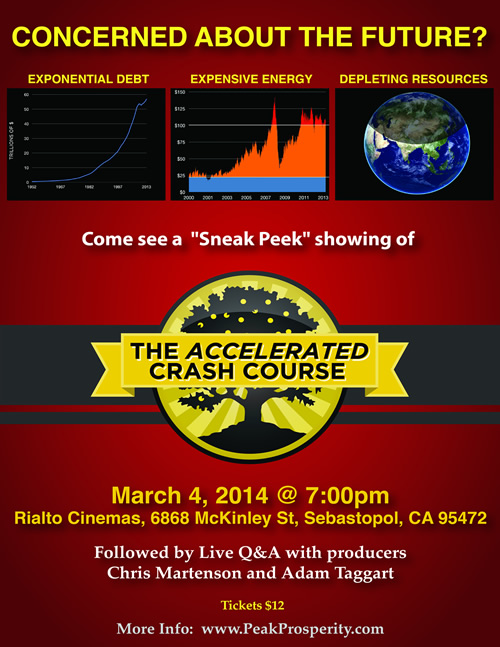 We understand this is likely a HUGE tease for those of you who can't make it. Our sincere apologies. We need to take this for a test-drive as well as complete some additional new content production before we're willing to release the new ACC ("Accelerated Crash Course") video into the wild. It will likely be at least another month or so before it goes public (but don't take that as a firm quote).

We knew this sneak peek would likely be catnip for fans of the "classic" version of the Crash Course. Forgive us for waiting until the go-to-market plan is fully in place before committing to details (which we promise to do when ready). We're working as fast as we can…

And for those who can make it, we look forward to seeing you on the 4th!