Recently the Fed reiterated that their $300 billion program of buying long-dated Treasury Bonds would end on schedule, meaning as soon as it hit $300 billion.  Well, that’s been achieved, so according to recent Fed statements, the program is over.

This is a critical development, because the ability of the US government to continue to fund its massive deficits (at favorable rates) requires that each Treasury Auction be “well bid.”  The Fed has been a major participant, and so we might reasonably wonder who will fill the Fed’s shoes.

This is critical, because the US government continues to float weekly auctions of Treasuries in quantities that just a few short years ago would have been unthinkable.

Exhibit A:  Next week’s schedule:

That’s $78 billion dollars over the course of just four days.

While not record-breaking compared to the amounts offered (and snapped up) in early 2009, for perspective, $78 billion is equivalent to the entire yearly economic output of Bangladesh, a nation of some 160 million souls. Let’s be honest, $78 billion is a lot of money, it really is, although I will understand these days if you’ve become numb to such staggeringly large numbers.  I know I have. 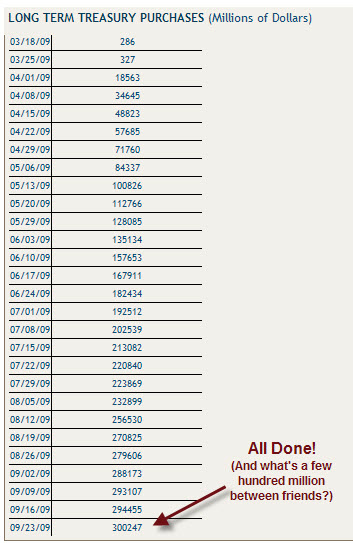 So according to its recent statements, the Fed is all done buying long-dated Treasuries.  I say ‘apparently’ because the Federal Reserve website just announced its next raft of Long-Dated Treasury Purchases.

I am still baffled as to why the Fed is showing both that it has bought more than $300 billion in Treasuries and that it has scheduled more purchases.  I assume there’s some sort of clever distinction that excludes some purchases (TIPS perhaps?) from the “official total” of the Long-Term Treasury Purchase Program.

It’s either that, or the Fed (as predicted here long ago) is going to continue buying Treasuries and other US paper assets in whatever amounts it wants, whenever it wants, regardless of previously announced targets.

In what is sure to be a coincidence, we might also observe that both of the newly announced Treasury purchases (above) happen to fall on Treasury Auction days.

Moving along, I am wondering exactly how all the necessary US government borrowing will happen without the Federal Reserve’s deep-pocketed assistance.  This is not a small matter – if the US government suffers a funding accident (a.k.a. an ‘auction failure’), it would the financial equivalent of a 9.8 earthquake.

Consider that the primary sources of funds for extravagant Treasury purchases by China and Japan (et al.) in prior years were those countries’ magnificent trade surpluses.  Somehow, despite a global collapse in trade (does minus 30%-40% count as a ‘collapse’?), the past 12 months have seen the highest ever foreign purchases of US Treasuries in history.  And not just by a little bit, but by a lot. 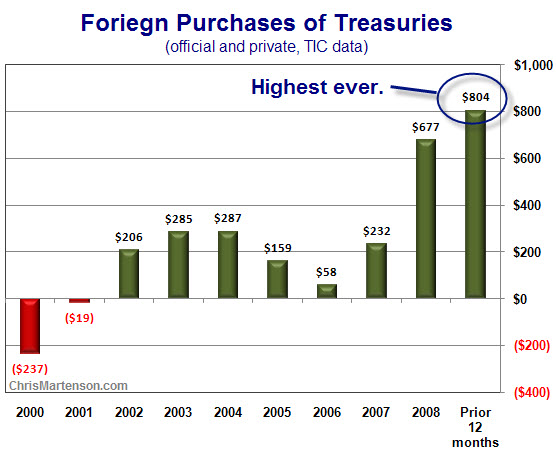 [Technical note:  Because 2008 was the last year of exceptional global trade, looking at the “prior 12 months” is mixing things up a little bit.  If we exclude 2008 purchases and instead annualize 2009 Treasury purchases, we find that 2009 is on track to fall some -10% short of 2008, indicating a recent slowdown in purchases.  But still an amount that is well beyond what we could rationalize on the basis of exports.]

Staying with the TIC data for a minute, what’s even more interesting here are the buying patterns of the seven largest countries over the prior 12 months (through July of 2009): 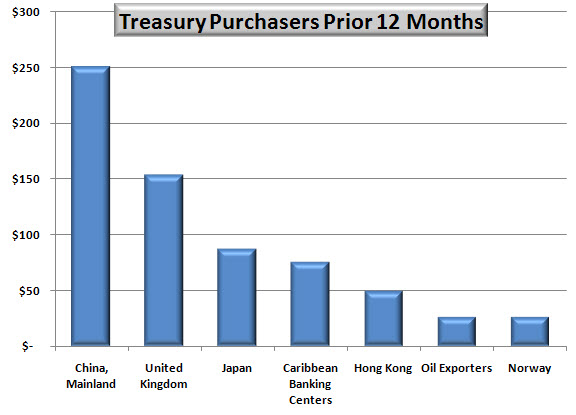 China and Japan have suffered major export collapses.  Both are engaged in internal stimulus programs that are extremely large, as a percent of their GDP.  How is it that they are now also engaged in Treasury purchases that are even higher than when their export markets were at peak?  Where does the money come from?

Even more interesting, the Caribbean Banking Centers are typically thought to be proxies for Hedge funds which happen to be located there for tax reasons.  We might guess that these funds represent the growing US dollar carry trade.

And the UK?  Who knows?  The UK banking center often acts as a “pass-through” for other entities, but the oil exporters are the usual suspects in that charade.  On whose behalf, then, would the UK be buying so many Treasuries?

The US government continues to have impressive borrowing needs, but the Federal Reserve has claimed to be done with its program of buying US government debt.

At the same time, the truly spectacular inflows of foreign dollars into US Treasury paper cannot logically continue forever, especially given the collapse in export markets.  There is even some mystery as to how they could have been as large as they’ve been.

Taken together, it would be logical to suspect that US Treasury paper and new debt issuances would come under some pressure, which we would detect as falling bond/note prices and rising yields.

However, that’s not at all what we are currently seeing, as indicated by the 10-year note yielding a paltry 3.2% and recent auctions have had more than three buyers biding for each bond.  The question before us is, can we see anything that might cause this to change?

I would submit that the US lacks sufficient domestic savings and productive capacity to finance its fiscal deficits internally so I propose that there are only two paths forward.  Either foreigners continue to finance the US deficits, or the Fed will resort to even more printing to cover the shortfall.

Where will the foreigners get the money?  Alternatively, how will they react if the Fed simply prints up the difference?

As always, trust yourself.