Inflation is actually much higher than what the BLS claims it is; something that purchasers of college tuition, pharmaceuticals, or health insurance know all too well.

To give the BLS some credit, they must try and estimate a single rate of inflation that applies to everyone equally.  But that is a completely impossible task. An octogenarian living in Seattle on a meager pension and taking lots of prescription medications will have a totally different inflation experience than an 18 year old living in their parent’s basement eating Ramen noodles.

But even after spotting the BLS some slack, there are some enormous and glaring errors in their methods that render the official inflation measure hopelessly – and dangerously – inaccurate.

In this article, I am going to reveal how US inflation numbers are badly understated, how this practice short-changes institutions and fixed-income individuals alike, and why this means fiscal and inflationary train-wrecks are the most probable outcome for the US — and, by extension, the globe.

Why This is Important

As a refresher, inflation in the US is calculated by the Bureau of Labor Statistics (BLS) in a measure called the Consumer Price Index, or CPI. It is used by the Federal Reserve to justify its money printing policies, by the federal government to calculate cost-of-living adjustments (COLA) for the entitlement programs (e.g., Social Security), and to set the interest rate on inflation-adjusted bonds known as TIPS. Indirectly, the CPI influences interest rates, the stock market, and a host of salary and pension negotiations each year. If the CPI is too low, even by a single percent, the impact is in hundreds of billions of dollars.

And from a financial planning standpoint, the impact is just as dire. If you are putting away money for a child for college, the rate of inflation you apply to the tuition has an enormous impact on the amounts you’d need to put away. In eighteen years, a current $40,000/yr tuition will become $66,000/yr at a 3% rate of inflation, but $107,000/yr at a 6% rate of inflation. The same logic and results apply to retirement planning.

Further, the cost estimates surrounding the current health-care debate in the US are founded on inflation projections that draw upon prior CPI readings for their baselines.

It is vitally important that our assessment of inflation be as accurate as possible.

Unfortunately, the CPI understates inflation, which is much higher (worse) than we’re told.

Understanding exactly how this is accomplished will help clear your mind and lead to more certainty in your decisions.

Every country fights its last battle, and in the US, unlike Europe, the prior enemy was deflation, which ravaged the land in the 1930’s.

Seeking to avoid that fate repeating itself, the US Federal Reserve routinely justifies the continuation of its massive money printing experiment (which goes by the all-too-fancy title “Quantitative Easing”) by citing an apparently low rate of inflation, as provided by the BLS.

Here’s a recent example of such justification at work:

Recent data show consumer price inflation continuing to trend downward. For the 12 months ending in November (…) inflation excluding the relatively volatile food and energy components–which tends to be a better gauge of underlying inflation trends–was only 0.8 percent, down from 1.7 percent a year earlier and from about 2-1/2 percent in 2007, the year before the recession began.

A 0.8% yearly rate of inflation (ex food and energy, of course) that is trending downwards certainly makes inflation sound like a non-issue and supports the idea of dangerous deflation lurking nearby.

Indeed, the Fed is right, after subtracting out the items that are most responsible for keeping everybody alive and comfortable (food and energy), the rate of inflation as reported by the BLS seems to be locked in a mortal tailspin…as long as you only look at the narrow range marked by the red line below: 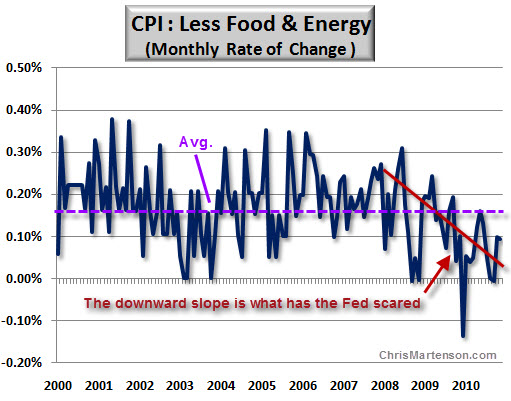 Well, the average person would be well within their rights to wonder what all the fuss is even about. After all, inflation is now within 0.06% of its ten-year average, and unless you are calculating the trajectory of a newly launched Mars probe, 0.06% is not really that big of a deal. But the Fed is terrified of it.

Backing up this view is the BLS, which provided us with these data for December 2010: 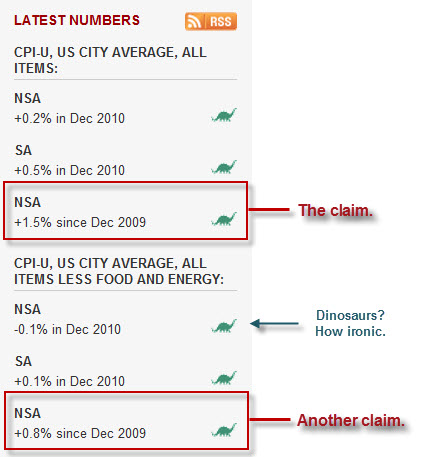 According to the BLS, the average household experienced an exceedingly tame rate of inflation of only 1.5% between December 2009 and December 2010. That is, what used to take $100 to buy in 2009 requires $101.50 in 2010; only a dollar-fifty more. Once we strip out food and energy, the cost index plummets, requiring only 80 cents more than a year ago to buy the same basket of goods and services.

The only problem with this view is that it is utterly, provably, and demonstrably wrong.

I can reveal how with one relatively simple example.

[Note to any journalists reading this. My standing offer to you is this: I will spend as much time as you wish going through this data if you feel that understanding it more completely will help your current or future reporting on the issue.]

Health Insurance and the CPI

As I mentioned in the Crash Course chapter on inflation, there are three major statistical ‘tricks’ that the BLS imposes on the Consumer Price Index. They are hedonics, which tries to account for improving quality in products over time, substitution, which is the act of switching to lower-cost items when prices surge on preferred items, and weighting.

For less-than satisfactory reasons, the BLS only weights healthcare at 6.5% of the CPI, although it represents 17.6% of the total GDP. That’s a big problem, because healthcare is the biggest and most consistent source of inflation over the years.

[Note:  This next section has been extensively edited from its original content to reflect new understandings and information.  See comments below for the context for these changes. Briefly, based on a conversation with a BLS employee I had incorrectly assumed that ‘health insurance’ reflected the total cost of health insurance.  It does not.  It is only meant to reflect changes in the retained earnings ratio of health insurance companies.  I truly dislike making errors and seek to correct them publicly and completely whenever they occur.]

Medical care as a CPI component rather oddly excludes all government expenditures for healthcare (primarily Medicare and Medicaid) and does not count the rising costs of health insurance to businesses.  After subtracting out these expenditures only 6.5% remains from the 17.6%. 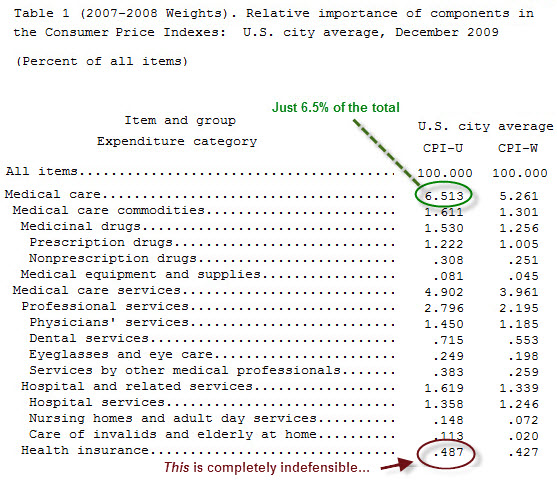 It turns out that in its attempt to capture health insurance the BLS splits it into two cost streams, one which goes towards paying for health care and the other which goes to the insurance companies.  The first cost stream is allocated to the medical care components listed above while the insurance company component is contained within the ‘health insurance’ subcategory.   But it’s all done by what is described as an ‘indirect method.’

Under this indirect method, the medical care index will not be affected by changes in policy characteristics, such as modifications to policy benefits and utilization changes. The approach implicitly assumes that the level of service from individual carriers is strictly a function of benefits paid.

By this method, the rising costs of medical care should feed into rising health insurance costs, which will then be captured in the medical care CPI.   Also, we might note that the part in bold implies that changes to insurance policies such as rising deductibles and copays, both very significant portions of the current experience for most people, will, perversely, cause the CPI for medical care to drop because less money will be registered as going towards medical services and commodities.  You pay the same amount to the health care company for insurance, but less is paid out because you have to shoulder a bigger portion via deductibles and co-pays and, presto!, less money is recorded as being paid out and so inflation is apparently less. I still need to vet that thought process with the BLS to be sure I’ve got it right, but the way things are worded, that’s the only way I can interpret it.

The cost of health insurance itself, has apparently been steadily falling for the past three years something that will be news to anyone whose premium’s have vaulted up: 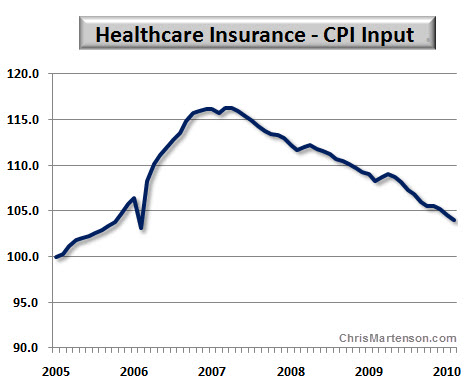 Because most private health costs are paid by insurance claims, it stands to reason that the medical care CPI should track the rise in health insurance over the years.  That is, if the methodology for tracking health insurance costs works, and those costs are properly allocated into the CPI, then both should give roughly the same answer over time.

But they do not. 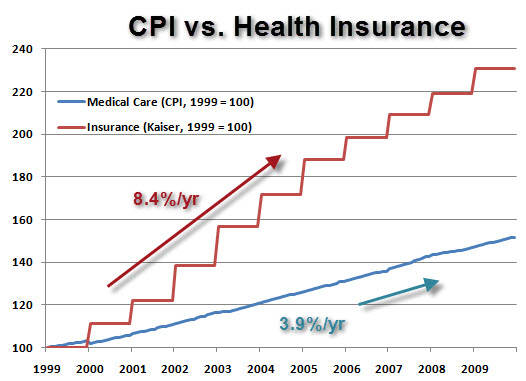 In just those two errors, underweighting healthcare and the inexplicable gap between health insurance increases and the medical care CPI, by my calculations the BLS is understating inflation by at least three percent, and possibly more.

If three percent does not strike you as a lot, go back and re-read the example about college tuition I provided in the sixth paragraph of this article.

For the reasons above, inflation is much higher than proclaimed. Yet we are being told, on a near-daily basis, that the massive money printing and deficit spending activities of the Federal Reserve and federal government, respectively, are not stoking inflation. At least, ‘not yet.’ Since the Fed uses the CPI as a key indicator in its decision making, the big risk here is that Bernanke will not begin to turn the wheel on the monetary supertanker until after it is too late.

Anybody engaging in any form of long-term financial planning – be they individuals, pension trustees, or budget setters – needs to be aware of the flaws and limitations of the official US inflation measure.

All COLA increases based on the CPI are too low. Any health care policy analyses that rely on the CPI (which is most) will vastly underestimate the true costs and are doomed to trap the nation in a regime of rapidly rising costs and deficits.

We are risking much by systematically understating inflation including our reputation, market confidence, and even the dollar itself.

Part II of this report digs much more deeply into this material and – important for both for individual and professional investors – lays out my predicted scenario for how this will all result in a systemic financial breakdown. Assets classes for inflation protection are also discussed.