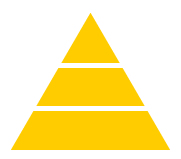 In today’s complex economy how do we progress financially from where we are today and the life of abundance we seek? This is the first question a financial advisor will ask us. It is seldom an easy question to answer because the quality of our life isn’t measured purely in financial terms. There are multiple factors including our work, our family and, fundamentally, our values. How does our quest for financial wealth balance with the people and planet upon whom we depend? Surprisingly, it all begins with soil.

First let’s step back and look at where wealth comes from. The Wealth Pyramid describes the three different levels at which wealth is created. By investing in each of these levels we can achieve a balance in our portfolio that reflects all our goals and values. We’ll also learn how soil health impacts all wealth.

Ask yourself, “Where does everything we need in order to live come from?” You are standing on the answer – the earth. The earth, the soil and all that resides above, within and below its surface are the source of all that we need to survive and thrive. All wealth therefore must derive from this.

Throughout history, from the earliest civilisations to kingdoms to the nation state, wealth has been measured by land owned or controlled. All needs were met from the land. Land ownership was held within the castle walls. The serfs outside the walls paid the king a handsome portion of the bounty that came from the crops they grew and the products they made from the king’s land. If a serf’s crops failed he lost his wealth and labour. The King only lost some income but still owned the land – his true wealth. Land ownership is an expression of Primary Wealth and the foundation of the Wealth Pyramid.

Secondary Wealth – is what we make from Primary Wealth.

When energy, in the form of coal and oil, was discovered beneath the soil, its abundance caused an explosion in Secondary Wealth creating the Industrial Revolution. Primary Wealth beneath the soil gives us ore, which becomes steel to build infrastructure. Soil begets food to feed us, trees turn into lumber to build homes. But it was the discovery of hydrocarbons to create energy that enabled labour to be replaced and goods to be made at a rate like never before. This led to the greatest economic expansion in human history. In societal terms, it is secondary wealth that made the middle class and created new fortunes for the multitudes. But it all came from the abundance of the earth. Secondary Wealth leverages Primary Wealth to create more wealth.

Tertiary Wealth – is a “claim” on Primary and Secondary Wealth.

There is wealth to be created at all three levels of the Wealth Pyramid, which takes us back to “balance”. How do we balance our treasure between these three that carry different risks and opportunities? One answer is to include sustainable organic farmland in our portfolio because, as Primary Wealth, it is the foundation for all wealth and the most sustainable and healthy of all farming practice. Farming isn’t always the highest flyer in the Wealth Pyramid but it is a hard asset that produces something we all need …food. It won’t depreciate to zero and if we take care of this farmland it will continue to take care of us.

Our economy stands on the shoulders of our soil and Primary Wealth. Just as there is a need for balance in the Wealth Pyramid, so too is there a need for balance in our soil. Balance is something nature will achieve on its own with minimal human interference. Soil health and balance are the crux of organic agriculture. And there’s a lot to balance. If you think a lot of life is going on above ground, it pales in comparison to the balance of life in the soil. According to Kathy Merrifield, a retired nematologist at Oregon State University, one teaspoon of soil can hold up to one billion bacteria, several yards of fungal filaments, several thousand protozoa and scores of nematodes. That is if they’re allowed to live together in balance through healthy soil stewardship.

Unfortunately modern conventional farming practices tend to create soil imbalance. They are also dependent to a large degree on a farming model that exists around genetically modified (GM) seeds. Conventional GM farming often uses minimal crop rotations, growing the same single crop year after year on the same land. This practice, known as mono cropping causes the depletion of nutrients and minerals, essentially ‘mining’ them out of the soil. In order to continue growing crops in this depleted soil, these nutrients and minerals must be added back in the form of hydrocarbon based fertilizers and mined minerals such as phosphate. Conventional GM farming is dependant on earth-­‐based, non-­‐renewable resources that are decreasing in supply, and increasing in cost.

Monocultures and the resulting poor soil health open the way for infestations of insects, diseases and weeds. Healthy bio-­‐diverse soil keeps these infestations in check. The lack of bio diversity requires synthetic pesticides and herbicides to be used, destroying the natural soil biology still further in an endless destructive downward cycle that turns healthy soil into dirt, hence the farmer becomes ‘dirt poor’.

Organic farming eschews the use of GM seeds and all synthetic inputs. This allows nature to do what it does best, balancing the billions of life forms that thrive in the soil. The symbiotic relationship between healthy soil and plants is a marvel whereby one supports the other. Healthy soil creates healthy plants and together they provide abundance. It’s that simple. By building healthy soil the farmer becomes “soil rich”. This is the difference between soil and dirt.

If we allow our soil to become dirt then Primary Wealth, the foundation of all wealth, causes suffering for Secondary and Tertiary Wealth. Soil health and wealth in all its forms are co-­‐dependent.

How Organic Farmland Can Balance Your Portfolio

Between October 2007 and October 2008 the Dow Jones Industrial Average declined 54% from 13,842 to 6,370. It took the next five years to recover its previous highs. During the same period Iowa farmland grew 36% in value. This represents how farmland (Primary Wealth) can help balance investments in Secondary and Tertiary wealth.

The Dow is up approximately 425%; Iowa farmland average price per acre is up approximately 585%Yet this comparison is not the whole story. In addition to appreciation, farms also produce income that adds to the value equation. This is where what you farm, where you farm and how you farm really counts. As of the spring 2015, conventional GM corn was selling for around $3.50 per bushel, close to or below the cost of production. In contrast organic corn was selling for over $12 per bushel. At the same time organic row-­‐crop farming can cost as much as 40% less to produce than conventional GM farming while meeting or exceeding conventional crop yields.

Why is organic corn more expensive? Because the demand is so high and the supply so low. In 2014 this imbalance was shown in the fact that for every dollar of organics exported by the US, it imported $8. When you consider your risk tolerance and values, you may want to consider investing a portion of your portfolio in the world of Primary Wealth, soil and organic farmland. It’s a triple bottom line investment. And like the life in our soil, it’s all about balance.

Harn Soper [email protected] is on the board of the Organic Farming Research Foundation (www.ofrf.org) and general partner with Sustainable Farm Partners, LLP (www.sustainablefarmpartners.com) focused on investing in Iowa farmland, managing it and converting it to organic.