This article ran for our enrolled users last week and is one in a series from respected guest commentators while Chris is vacationing with his family and working on his new book. Many of you will recognize today’s author from his insightful comments that appear frequently across ChrisMartenson.com. Enjoy!

Since early April, the yield on 10-year Treasury notes has dwindled from 4.0% to below 2.5% on August 24th.  Meanwhile, the 12-month change in the Cleveland Fed’s median CPI has hovered feebly between 0.5% and 0.6% since March.  These abnormally low interest and inflation rates are fanning fears of renewed GDP contraction, a plunge into price deflation, or both.  Boardrooms and blogs are humming with rumors of a ‘QE II’ (Quantitative Easing II) program to counter a chilly deflationary dip.

One reason fears are so acute is that the Federal Reserve’s main policy tool, the overnight interest rate on Fed Funds, is flatlined at zero.  Moreover, via ‘extraordinary measures’ beginning in September 2008, the Federal Reserve added some $1.4 trillion of securities, including $1.1 trillion of MBS (mortgage-backed securities), to its balance sheet in a stimulus bid.  Yet despite these heroic efforts, economic leading indicators have turned weak this summer, as sinking Treasury yields add to the disquiet.

In its August meeting, the Federal Reserve downgraded its economic outlook, and backed away from plans to let its enlarged securities holdings run off as MBS mature.  Instead, it committed to buying about $18 billion of Treasuries from mid-August through mid-September, mostly in the 2- to 10-year range, by reinvesting MBS principal payments.  It also set a $2.05 trillion floor for its securities holdings — thus freezing ‘QE I’ in place (perhaps forever) and hinting that a larger ‘QE II’ could follow.

But if QE I isn’t working, what hope would QE II have of achieving its purpose in a fresh emergency?  This paper discusses a faster-acting alternative, which is feasible within the existing statutory and institutional structure — namely, targeted purchases of international reserve assets instead of Treasury notes.

Papers published by central bankers place great weight on managing expectations.  In Seven Faces of the Peril, James Bullard of the St. Louis Fed discusses how a zero percent Fed Funds rate could actually entrench deflationary expectations.  Now, as fractional interest rates infect the yield curve from the short end into multi-year maturities, expectations are growing more somber, while what may be a dangerous safe harbor Bubble in bond prices develops.  (Bond prices rise as their yields fall.)

What if the intended stimulative effects of buying T-notes (cheaper borrowing, more bank reserves) are outweighed by deflationary expectations engendered by plunging yields?  In that case, QE II would be counterproductive.  As Bill Hester of Hussman Funds asserted in a paper titled The Paradox of the Zero Bound, ‘In periods where the economy gets stuck in the “unintended” state, long rates become the primary signal for expectations of growth and inflation. Lower rates imply an expectation of deflation and economic weakness, and become associated with weaker stock prices.’  Ouch!  Ungood!

Although the Fed’s assets are mostly Treasuries, agencies, and MBS, it also holds international reserves — meaning gold, SDRs, and foreign currencies (specifically, euros and Japanese yen).  As a student of the 1930s, Fed Chair Ben Bernanke is conversant with the competitive devaluations which marked that era.  The US sharply devalued the dollar against gold, from 0.0484 troy ounce in 1933 to 0.0286 troy ounce in late 1934.  Strikingly, the crushing 10% deflation which prevailed during 1929-1932 ended then, and didn’t return.  And a brisk economic recovery unfolded from 1933 to 1937.

Coincidence?  Perhaps not.  Devaluation is a recognized third way of easing financial conditions, in addition to the traditional policy tools of fiscal deficits and monetary base expansion.  When fiscal policy is tightening and monetary policy is immobilized at the zero bound, currency devaluation is the only tool left in the box to counter deflation.

Let’s examine the five largest trading partners of the US, as well as the US itself.  We’re interested in their bilateral trade volume with the US, their international reserves, and how those reserves compare to the size of their economies:

According to the New York Fed’s most recent quarterly report, Treasury and Federal Reserve Foreign Exchange Operations, foreign currency in the Treasury’s Exchange Stabilization Fund totaled $23.8 billion, in euros and J-yen.  Likewise, the Federal Reserve’s holdings consisted of $23.8 billion of euros and J-yen, plus $1.2 billion in carrying value of swaps.  Other US international reserves include SDRs and gold held by the Fed.

One quick and dirty survey of foreign exchange rates — The Economist‘s Big Mac index — indicates that the euro is overvalued; the J-yen and Canadian dollar are about neutrally valued, while the Mexican and Asian currencies (ex-Japan) are quite undervalued. 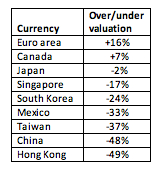 Since US forex holdings already consist of J-yen and euros, intervention should concentrate on seven other currencies — those of the ‘Asian five’ of China, South Korea, Taiwan, Hong Kong, and Singapore; the US’s two North American neighbors, Mexico and Canada — plus gold.

While most of these purchases would be straightforward, three issues would nonetheless arise.  First, China has capital controls.  Since China pegs its yuan to the dollar by buying dollars, US sales of dollars to buy yuan securities would run counter to China’s intervention.  For its part, the US could point out that China holds 20 times the international reserves of the US.

In any event, the US can indirectly pressure China by purchasing other Asian currencies.  Bloomberg reported that China has doubled its allocation to Korean Treasury Bills (KTBs) in 2010.  Why shouldn’t the US do a little front-running of China in southeast Asia, to underscore its reasonable demand for access to Chinese securities?

Second, US gold reserves have languished at a reported $11.041 billion for years.  This piddling sum is based on a 40-year-old historical value of $42.22 an ounce.  In order to account for new gold purchases, the Fed would be obliged to mark its gold to market, raising its carrying value to over $300 billion.  Though only an accounting change, the substantial numerical boost in the Fed’s reported assets would send an expansionary signal while augmenting the Fed’s equity.

Finally, the lead agency for foreign exchange intervention is the US Treasury.  Practically speaking, bolstering international reserves would be a Treasury project, carried out operationally by the New York Fed.  Prior interventions, such as a loan to Mexico by the Treasury’s ESF, have been accomplished without Congressional authorization.  So, apparently, can this one.

Will it work?  Ten years have passed since the last US intervention to boost the euro.  A coordinated international purchase occurred after the euro fell below $0.85 in Sep. 2000.  Although the euro fell back to this level several more times through mid-2001, the threat of further purchases seems to have prevented it from sinking much below the perceived intervention threshold of 85 cents.  By July 2002, the euro reached par; it carried on rising to reach a peak of $1.60 in April 2008.  This result is encouraging.

Unlike the US, none of the economies targeted for exchange intervention are on the verge of debt deflation.  If they choose, they can counter US intervention with their own dollar buying.  But such offsetting purchases would be expansionary unless sterilized.  In practice, sterilization is rarely fully achieved.  More likely, their central banks would choose to raise interest rates to counter the expansionary effect.

And this is exactly the objective: to push up global inflation and short rates a notch or two — first and foremost in the US — to help the at-risk large economies (the US, Japan and euro area) extricate their policy rates from reposing at or near the daunting zero bound.  (For our purposes, a ‘notch’ means a percentage point.)

Doubtless, the intervention targets will whinge and moan.  Owing to the dollar’s still formidable status as the dominant reserve currency, the US doesn’t need as large a stash of forex reserves as others do.  Nevertheless, with the US representing a quarter of global GDP, other countries have a vested interest in its economic well-being.  Ultimately (with a caveat concerning China), they will prefer a bit of exchange rate pain to the more inflexible alternative of hiked tariffs, which remain a political risk.  Cross-holdings of reserves may also confer strategic advantage, if they are viewed from a keiretsu or chaebol perspective as implying cooperation and linked destinies.

According to Bloomberg’s Alex Tanzi, international reserve assets (excluding gold) have risen a breathtaking 20.6% over 12 months, to a record $8.55 trillion. Nearly 30% of this total is held by China, and over 60% in Asia.  Unless sterilized (and they mostly aren’t), these reserves expand foreign money supplies.  By contrast, US holdings of international reserves are frozen and stagnant.  To ward off demon deflation, the US needs to change its timid, catatonic profile in the reserves arena.

Buying gold may prove to be even more effective than forex purchases.  Over the past 30 years, the correlation between the dollar and gold has been a strong minus 0.65, reported Jeff Opdyke in the WSJ, citing a study by Ibbotson Associates.  Writing up US gold to market value and announcing further acquisitions would exert a potent downward push on the dollar.

A lower dollar will hike import prices, boost exports, and stimulate the US economy.  As a pertinent example, Germany’s GDP received a sharp boost from the euro’s depreciation in early 2010, rocketing to 9% annualized in the second quarter.

Lesson:  Devaluation works.  When interest rates have reached the zero bound, the fisc is tapped out, and deflation fears are tainting the collective consciousness, devaluation may be the only lever that works.

One can imagine a less profligate, less interventionist, less militarized US economy, which might not have fallen into this plight to begin with.  Whether the US should have a dirigiste mixed economy and central bank are outside the scope of this essay.  Taking an interventionist bent as a given among present-day policymakers, this paper merely offers a Realpolitik argument that they should intervene effectively, if they intervene at all.

machinehead is a member of the ChrisMartenson.com community and a frequent and prolific comment poster to the site.  His views and opinions are his own.