Wolf goes into more detail about the payrolls numbers. My summary:

There was a Fed meeting this week. Powell, after getting feedback from the nation that nobody is buying “inflation is transitory”, switched direction. Instead of focusing on “inflation” (which is pretty clearly not transitory), the Fed will now be focused on “full employment.” Which is to say, “we are no longer pretending to care about inflation.” Does this mean the Fed won’t raise rates until those 4.7 million people get re-hired? Which would be “full employment?” That’s what it sounded like to me. “Transitory Inflation!” is now “Full Employment!” The Fed has signed up to continue destroying the value of the buck until everyone has a job! Or something like that. I’m exaggerating, but not by much.

The Fed has decided to slowly taper their money-printing operation by $15 billion per month, starting next month. That means that theoretically there will be no more money printing by mid-2022. Market is predicting two rate increases in 2022, while the Fed itself is projecting zero rate increases over that same period. Hard to say which one will end up being right.

Will Powell even keep his job? He’s up for re-nomination in February.

As has become routine, gold and silver sold off briskly on Wednesday morning before the Fed announcement, recovered perhaps half of the losses, and then moved higher during and after the press conference. I thought of this reasonably familiar pattern as the banksters enabling me to buy some silver at a discount pre-meeting. Which is what I did. Not financial advice. Sold at end of week. Really not financial advice.

Gold rallied +35.44 [+1.98%], with all the gains happening on Thursday and Friday, following the FOMC announcement Wednesday. Gold hit a new 2-month high. Gold is in an uptrend – well above all 3 moving averages. Gold/Euros looks even stronger. You can see in the (daily) chart below how all the gains came following that FOMC press conference. 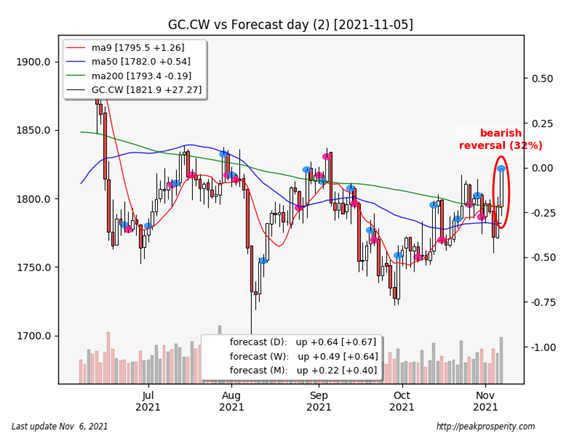 Silver rose +0.27 [+1.12%], managed to close back above the 9 MA, executed a strong swing low on Thursday, and moved back into an uptrend on Friday. Silver’s open interest remains quite low (which is bullish), but the COT commercial shorts have risen – which is somewhat bearish. Silver really needs to close above the old high (roughly $25) to cement its bullish trend change the way gold has already done. Silver is lagging gold – no 2-month high for silver just yet. 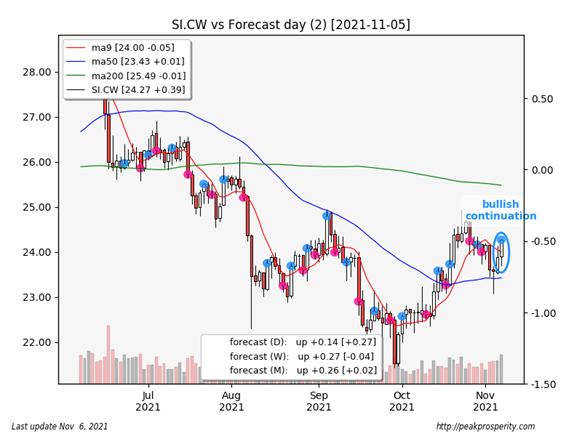 Miners rallied too, up +3.46%, with the gains happening on Wednesday and Friday. Miners look a lot like silver – they are lagging, as they remain well below their previous high. The underperformance of both silver and the miners (the “risk on” components of PM) suggests that PM is still in a downtrend. 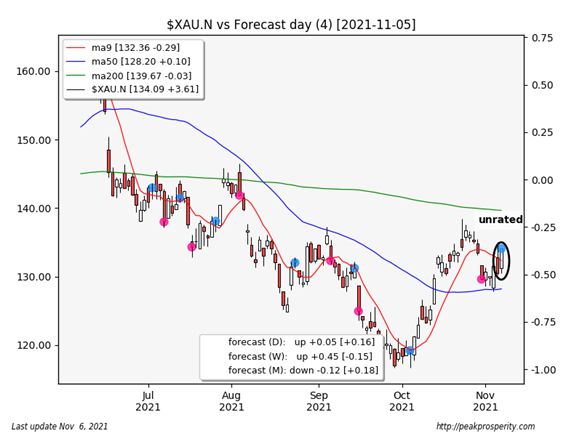 The buck moved slightly higher, up +0.18%, with the gains happening on Thursday. The flow into the buck suggest that the markets do not appear to be projecting a massively inflationary outcome due to the Fed’s focus on “Full Employment.” 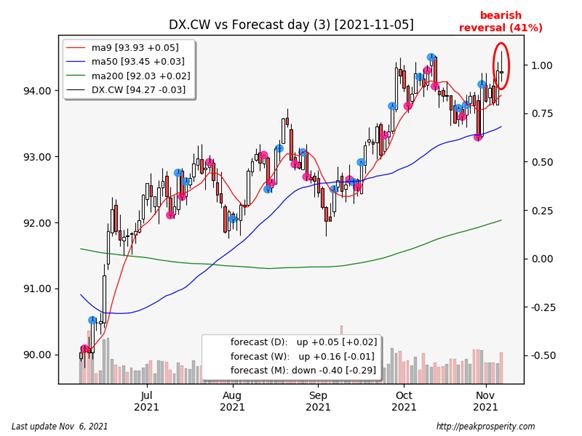 The 10-year futures rose +0.82% – money appears to be pouring into the 10-year too; the yield fell -10 bp to 1.45%. This supports the positive move into the buck. It all happened on Thursday and Friday. The bond market seems to be happy with the Fed’s response. That – or the Fed is buying the 10-year. Its hard to know which one is true. It was a pretty strong move in the 10-year Treasury. 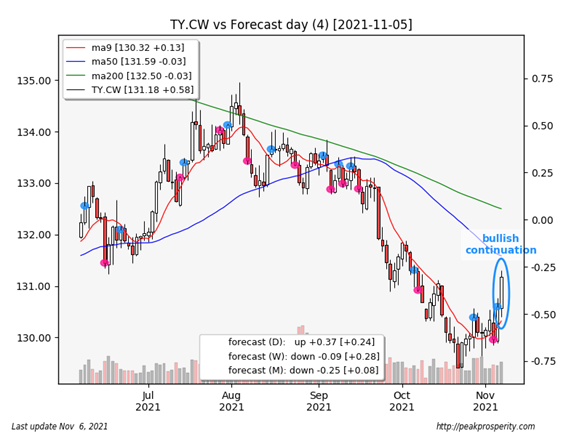 The master resource moved lower, falling -2.18 [-2.61%] to 80.45. Note this is a weekly chart for crude – the moves in crude this week were mostly divorced from the FOMC meeting results, unlike most of the other components. Crude is now in a daily downtrend – but it remains above the 50 and 200 MA lines. 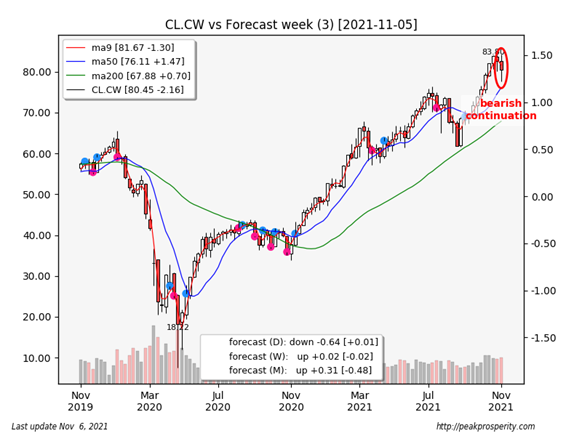 For the most part, the FOMC meeting drove prices this week, with some additional push from the positive payrolls report. It ran counter to the recession-flation pattern of the last few weeks. The Fed has told us they (mostly) don’t care about inflation. Its all about jobs. Perhaps – Chair Powell is looking to keep his job? Ignoring inflation feels a little bit like Nixon/1971 – trading off huge inflation later in exchange for some temporary good news in GDP.

News That Caught My Eye

Pfizer-mectin (actually called PAXLOVID) appeared to do well in its clinical trial; treatment: 0 deaths, vs placebo: 10 deaths, n=774. There are 3 trials ongoing: a PEP (post-exposure) trial, a vax-breakthrough trial, and a standard-risk within-5-days-of-symptoms trial. PAXLOVID is a SC2 protease inhibitor, and is co-administered with ritonavir, which is an HIV protease inhibitor.

However, Ritonavir isn’t for the faint of heart:

Co-administration of ritonavir with several classes of drugs including sedative hypnotics, antiarrhythmics, or ergot alkaloid preparations may result in potentially serious and/or life-threatening adverse events due to possible effects of ritonavir on the hepatic metabolism of certain drugs. Review medications taken by patients prior to prescribing ritonavir or when prescribing other medications to patients already taking ritonavir.

And, as Dr Kory points out, our friends in Pharma have this history of obtaining optimistic and non-reproducible results in trials they run, especially compared with trials on the same substances run by scientists who don’t have shares in the company.

One wonders what a head-to-head trial (Pfizermectin vs Ivermectin 0.6 mg/kg) would look like.  Think that happens?

Given how much money is at stake, I’m sure the Pfizer-mectin/Ritonavir combo (PAXLOVID) will be found safe-and-effective by the FDA.  And it does appear to perform better than Merck-mectin (Molnupiravir).  No long term testing either, but that won’t bother FDA at all.  After all, they approved Aduhelm, which doesn’t even work at all.  Because – “public health!”

Its a pity that Ivermectin isn’t an on-patent molecule.  Merck would be rich, FDA would have approved it 16 months ago, and millions of lives would have been saved.

Just our bad luck, I guess.

Xi Zhenhuan, China’s climate envoy, said China was “not against” the target but has also refused to commit to it. Without Chinese buy-in, 2 degrees is likely the best that can be achieved.

So the CCP did show up – via Zoom.  How much carbon did they save by doing this?  Apparently by not flying in monster planes, and avoiding the huge convoys of armored, expensive, slow-moving gasoline-powered cars, they “snubbed” the summit.  Which was supposedly about “climate change” and “reducing carbon.”  Ah, irony.

And – in a rare show of honesty, the CCP refused to commit to reducing its 30% of carbon emissions by 2030.  For which they were spanked by the media.  Bad, bad, CCP.

Two words, media: “Hong Kong.”   CCP gonna CCP.  Anyone non-captured, and paying even a little bit of attention would know this by now.

So the House passed the “$1.2 trillion dollar Infrastructure bill”, after much gnashing of teeth.  Here’s what is in it:

Note: those with basic math skills will notice that sums to around $550 billion; and yet, we’re told it is a $1.2 trillion package.  So what is the other $650 billion being spent on?   This CNN article (https://www.cnn.com/2021/07/28/politics/infrastructure-bill-explained/index.html) says it also “renews existing transportation spending” as well as saying the new spending would happen over 5 years.  So $550B / 5 years = $110 billion in new spending, per year. 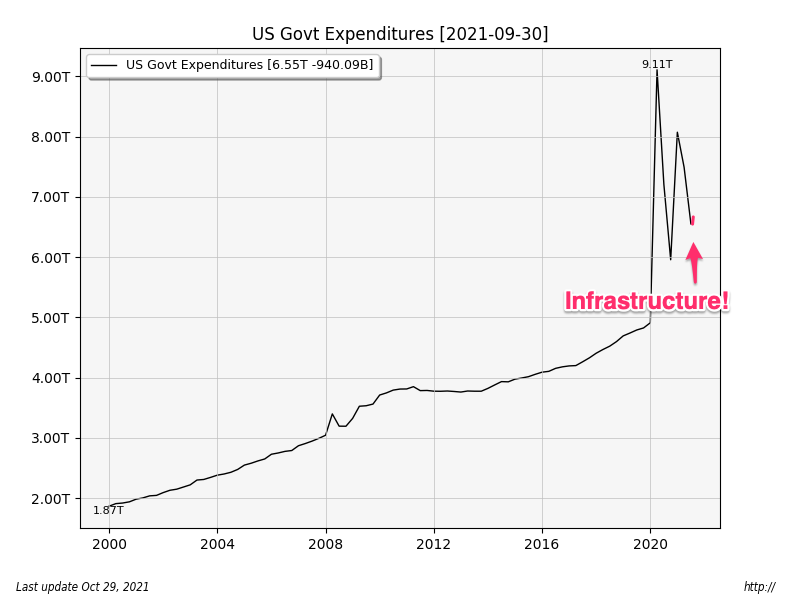 I don’t know about you, but with all the fuss about “Infrastructure”, I thought it would end up being more than a rounding error.  Both “sides” sure made it sound like a really big deal.  I was fully prepared to write a piece about the massively inflationary impact.  And then I did the math.  It really is a rounding error.

So – a victory for the Plebes? Mr McAuliffe was a Critical Race Theory Nazi.  “We own your children!”  And Mr Youngkin?  Well, turns out he worked for the Carlyle Group for 25 years.  What’s a Carlyle Group?  Well, they manage money.  A whole lot of money.  Hundreds of billions.   “Carlyle” was the name of a hotel owned by the Mellon family – that’s how the group got its name.  And there’s more:

Between the lines: The most-utilized election system and software companies are owned by U.S. private equity firms. Dominion Voting Systems is the best-known of these vendors, as it’s become the subject of evidence-free conspiracy theories

The Canada-founded and Denver-based company was acquired in mid-2018 by Staple Street Capital, a mid-market buyout firm co-founded by Carlyle Group and Cerberus vets.

Just based on the background, it would appear we have a transfer of power from one “woke-left” Oligarchy-stooge, to a “center-right” Oligarchy-stooge.  I’m guessing both campaigns were well-funded by…the Oligarchy.  It appears that a change in stooges is what the Oligarchy is looking to provide, in order to foster an appearance of electoral choice to the Plebes.  Like: from Bush, to Clinton, to Bush II, to Obama.  That kind of “choice.”  I’m sure the woke-left stooge didn’t like losing his slot, but – he matters to the Oligarchy just about as much as Cuomo, or Newsom.

“See?  No need to rebel!  You can affect the outcome by your vote!  Red-stooge or Blue-stooge!  You pick!  We don’t care which one you choose!”  Plus: “elections are fair!”  Especially when both candidates are Oligarchy stooges.

This is what the “Critical Race Theory” issue is all about.  It is one more manufactured, non-economic issue for the Plebes to fight about.  The Plebes get to campaign hard, get rid of this educational pustule, proclaim victory, which results in a brief happy moment of apparent electoral choice, and as a result, the Plebes will not notice that their wealth continues to decline, and the Oligarchy continues to get richer. Winning one side of an Oligarchy-manufactured issue (which by definition doesn’t affect bottom lines) provides the illusion of choice and agency.

Vax mandate repeal?  Cheap Treatments For You?  Hearings into Gain-Of-Function?  Eliminating Pharma capture of our “health” agencies?  Ending the obscene drug prices and predatory sickcare costs?  Ending the revolving door in government?  Ending the domestic surveillance state?  Bwahaha!  Not a chance.  Be happy with your Critical Race Theory victory, Plebe!

Here’s one from Berenson – apparently Gavin Newsom has vanished from public view.  For ten days now.

Gov. Newsom remains out of public sight to deal with family obligations

When the surprising announcement was made Oct. 29, a spokesperson said Newsom planned to participate virtually in the conference this week. But the California delegation’s schedule at the meeting this week, released by the governor’s office, did not include Newsom.

So when was Governor French Laundry’s last appearance?  When he got his COVID-19 booster shot.

And one more from Berenson:

The mandate is coming apart at the seams. The trucker exemption is particularly absurd – is there a more obvious vector for disease transmission than a long-haul trucker? If you are working ALONE AT HOME the mandate applies, but truckers are exempt. (NOTE: See update at end.)

Maybe this is why President Grandpa’s handlers took so long to issue the actual mandate.  They wanted six weeks to terrify as many as possible on the fence into getting the shot (because – mandate!), and give the Oligarchy-held corporations cover (think there might be some Oligarchy cross-ownership between the Big Corporates and Pharma via BlackRock & Vanguard?  Maybe?) for pushing the mandates, even though they all knew it would be eventually struck down.  (Yes – the mandate just has a stay right now.  But I’m guessing it will eventually lose in court.)

A terror campaign by Oligarchy to push vaccination?  As they say, all’s fair in love and war.

And – maybe its just me – it seems as though this is probably not about “love”.