But here we have a pretty chart!  With the endpoint at 50 ng/ml! 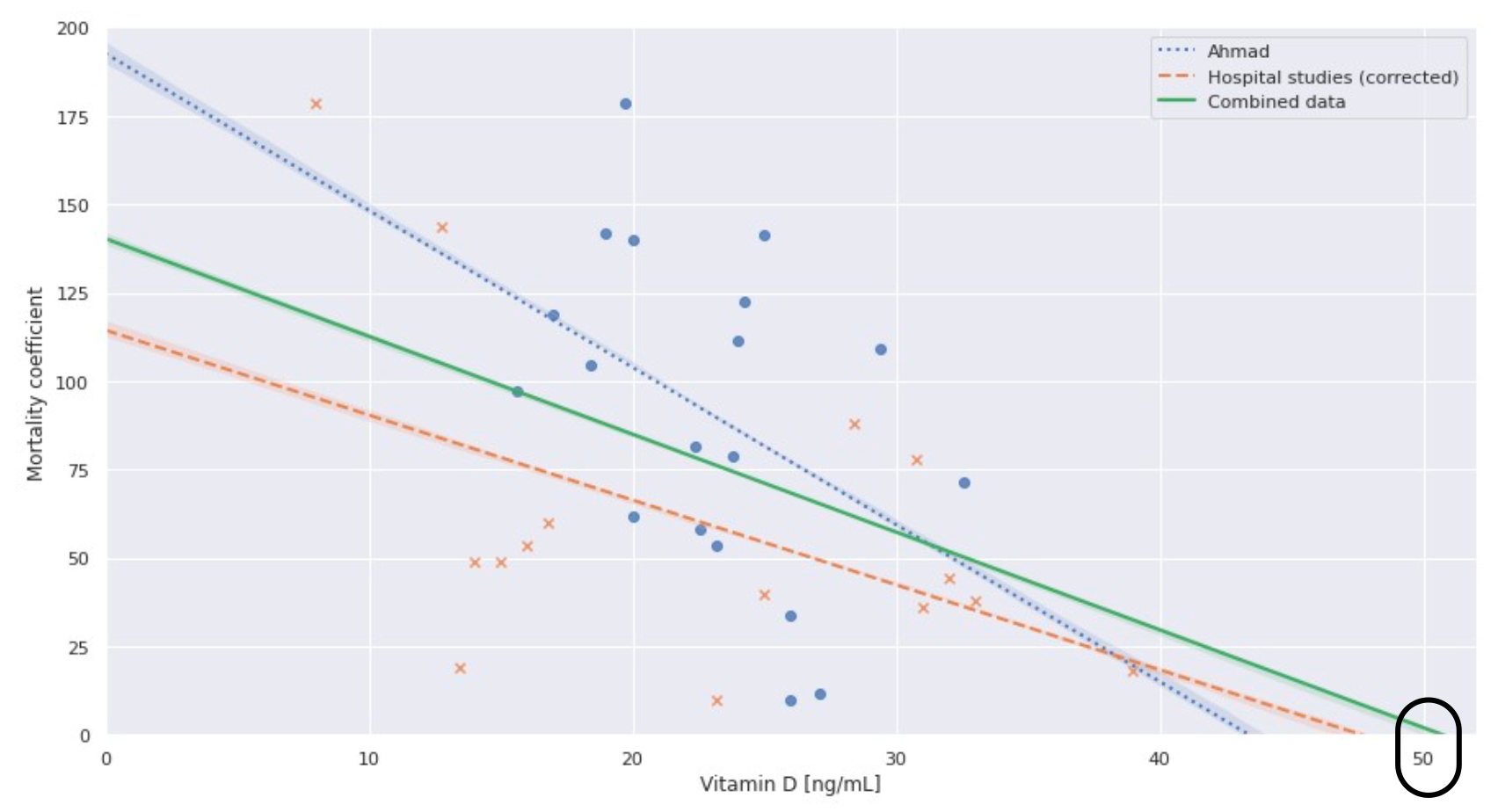 Did I just read that vit-D reduced clotting in severe COVID patients?  I think I did.

I was amused to see this bit:

There is a major discrepancy with the 30 ng/ml D3 value considered by the WHO as the threshold for
sufficiency and the 20 ng/ml limit assumed by D-A-CH countries.

Now why would the WHO do this, I wonder?  Let me think upon that for half a nanosecond…do Pharma profits go up or down if the entire world is vitamin D sufficient?  Anyone?  And who is the #3 funder for the WHO?  Anyone?

There were some caveats in the paper, however:

…It also explains why, on the one hand, many so-called “autoimmune” inflammation-based diseases do highly correlate with the D3 level based on, e.g., higher latitudes or higher age, when D3 production decreases, but why only parts of the population are affected: it is presumably the low responders who are mostly affected. Thus, for 68%-95% (1 or 2 sigma SDs), the suggested D3 level may be sufficient to fight everyday infections, and for the 2.5%-16% of high responders, it is more than sufficient and is completely harmless. However, for the 2.5%-16% of low responders, this level should be raised further to 75 ng/ml or even >100 ng/ml to achieve the same immune status as mid-level responders. A vitamin D3 test before the start of any supplementation in combination with the patient’s personal history of diseases might provide a good indication as to which group the patient belongs to and thus whether 50 ng/ml would be sufficient, or, if “normal” levels of D3 are found (between 20 and 30 ng/ml) along with any of the known D3-dependent autoimmune diseases, a higher level should be targeted as a precaution, especially as levels up to 120  ng/ml are declared to have no adverse effects by the WHO.

And a last point:

As long as enough vitamin K2 is provided, the suggested D3 levels are entirely safe to achieve by supplementation. However, the body is neither monothematic nor monocausal but a complicated system of dependencies and interactions of many different metabolites, hormones, vitamins, micronutrients, enzymes, etc. Selenium, magnesium, zinc and vitamins A and E should also be controlled for and supplemented where necessary to optimize the conditions for a well-functioning immune system.

So there you go.  50 ng/ml, maybe more if you have an auto-immune condition, and K2/selenium/magnesium/zinc/A/E as appropriate.

This is all just reinforcing our vitamin D evidence that we already know about.  But this paper provided both a) an interesting number-target – and a chart too, which I’m a sucker for – as well as b) information on who might need higher levels depending on their situation, and c) other supplements that aid vitamin D in doing its work.

Or – you could just become a hunter-gatherer, and these vitamin D problems largely go away.

This result matches scientific data on the natural vitamin D3 levels seen among traditional hunter/gatherer lifestyles in a highly infectious environment, which were 110–125 nmol/L (45–50 ng/ml) [168].

I’ve learned a lot from you and really appreciate it.  It’s “common knowledge” now that vitamin D matters a lot vs. covid. Real data is always better than only “common knowledge”.  In that light, I found that achieving an adequate serum vitamin D level wasn’t as simple as spending a lot of time outside (which I do).  The thing is, I usually wear clothes, and even in the summer wearing shorts much of my body is covered.  I also was taking 2000IU for a couple of years.

I had my D level tested in July 2020, thinking I was rocking it, and the result was 27.  YUK.  My doctor, who is somewhat tuned into nutrition, suggested that I increase the dose to 4000-5000 until stabilized at a good level.  After that, she recommends that dose in the winter and 2000IU in the summer for people like me who “tend to run low”.  I got tested again in December 2020 and was happy with the result of 50.  In light of what you shared here, I will increase the dose a bit.

FWIW, I think I got covid a few weeks ago, though I wasn’t tested.  I tutor in a high school where vaccinated staff tested positive, and when I started feeling a bit “off” implemented the FLCCC protocol immediately.  Including horse paste.  It felt like a moderate cold for 3 days and then back to normal.  In retrospect I should have done a home test, so that I would know that I have immunity.

Thanks again for all you do

Thank you Dave!!!! I love this research! Thank you for sharing. I have already passed it along to a lot of my friends. This saves lives!!  Many believed 20-30 was enough.

I am going to get a test for my vitamin D levels and adjust accordingly.

A letter written and signed by hundreds of doctors and scientists advocating for greater awareness in the face of Covid-19.  There’s an interesting part of the story here that will not be surprising to some…

It has been shown that 3875 IU (97mcg) daily is required for 97.5% of people to reach 20ng/ml, and 6200 IU (155mcg) for 30ng/ml,4 intakes far above all national guidelines. Unfortunately, the report that set the US RDA included an admitted statistical error in which required intake was calculated to be ~10x too low.  Numerous calls in the academic literature to raise official recommended intakes had not yet resulted in increases by the time SARS-CoV-2 arrived. Now, many papers indicate that vitamin D affects COVID-19 more strongly than most other health conditions, with increased risk at levels < 30ng/ml (75nmol/L) and severely greater risk < 20ng/ml (50nmol/L).1

A scientific report with erroneous data?  Oh my, that would never happen, right?

Ive been reading so much about Vit D, not only in its protective role in preventing/treating covid but, more importantly, in its role in protecting against cancer.

Having read a couple of articles expressing the opinion that 50-70ng/ml was effective in preventing most cancers, I decided to add some supplementation. I’ve been taking 6000 iu of Vit D along with a small amount of K, and about 2000 mg of vit C. According to what Ive read, researchers found that people with Vit D levels above 50ng/ml basically dont get cancer. Of course its more complicated than that, but theres a demonstrated relationship.

Theres no doubt in my mind that it is protective against illness in general. Usually my son starts school, gets a cold and gives it to me within a few days. Happens constantly. If he gets sick I ALWAYS get it. My wife hardly ever gets sick.

This time he got sick, I felt a little funny for a day, and then it was gone. Thats the first time thats ever happened. Of course its anecdotal, but its enough to convince me to keep taking it.

I ran out of separate Vitamin C (sodium ascorbate), so now only get Ascorbic Acid in a multi-vitamin.

That and eating 2 or 3 different fruits every day, I hope will be “enough”.

I wonder if there’s an interesting story associated with the shortage of Sodium Ascorbate.  Is it stuck on a ship or a victim of Trucking issues.  Like what is happening in England.

The anti-cancer features of vit-D are absolutely not to be ignored (esp for prostate cancer).  Especially if you have darker skin.  Which I don’t – but – you might.  Some of my friends sure do.  And the anti-viral features (“flu season = low vit-D season”) too.  Plus the usual COVID thing.

I honestly think that if we remediate deficiency, we get back to more activity, and we do a little “strategic starvation” that encourages cleanup (i.e. fasting) we could greatly reduce the immense burden of  Pharma-profitable disease without too much effort.

Regarding testing: “trust, but verify.”  I’m sure glad I did.  It was $120 but – happy to have the confirmation.  That 2000 IU supplementation level was pretty common in some studies, which resulted in “not much of a benefit.”  This backs up Julie’s experience.  “Not nearly enough.”

Gosh.  Can’t imagine why they’d do that 2000 IU supplementation, or they’d have that “statistical error” which just happened to skew low.  (cough *regulatory capture* cough).

I say we reward our helpful bureaucrats – whose salaries we pay – for their sociopathic “vitamin-D statistical error” in the only way they will really understand:

“To encourage all of the other bureaucrats.”

Is getting over one’s skepticism that it could be this easy?  Could we really be so protected from so many infectious diseases by supplementing (or staying outside all day long like a hunter/gatherer)?  Could our immune systems have been running better all along if only we had been given this obvious guidance by our health authorities?  How is it that an obvious lever for wellness and terrain boosting has been overlooked by our Western medical system for so long?

We know that Vitamin D sufficiency is important for infectious disease.  We have heard here regarding cancer too.  Can we stretch and ask about heart attacks?  That would seem a bit far fetched, right?  Ummmmmm

Conclusions
In patients with Vit-D deficiency and no prior history of MI, treatment to the (25-OH)D level of >20 ng/mL and >30 ng/mL was associated with a significantly lower risk of all-cause mortality. The lower risk of MI was observed only in individuals maintaining (25-OH)D levels ≥30 ng/mL.