Why am I being censored?

Why am I and the important news I talked about censored?

Why was my post removed for “spam”? Can you explain what’s spam about it before you are now probably going to delete it again and ban me?

I wanna show you guys this. It’s in German, but it’s important and I’ll explain. This chart shows the ratio of people who tested positive for Corona in a State in Germany per 100,000 inhabitants. The red line is “unvaxxed” (which actually just means less than 2 jabs) who tested positive and the brown line is people who have been fully vaxxed (2 jabs or more). You can clearly see that the rate of people who test positive is MUCH higher among the “unvaxxed”. Which is why this chart has been used as the basis for a new law here in Germany that has just been introduced. 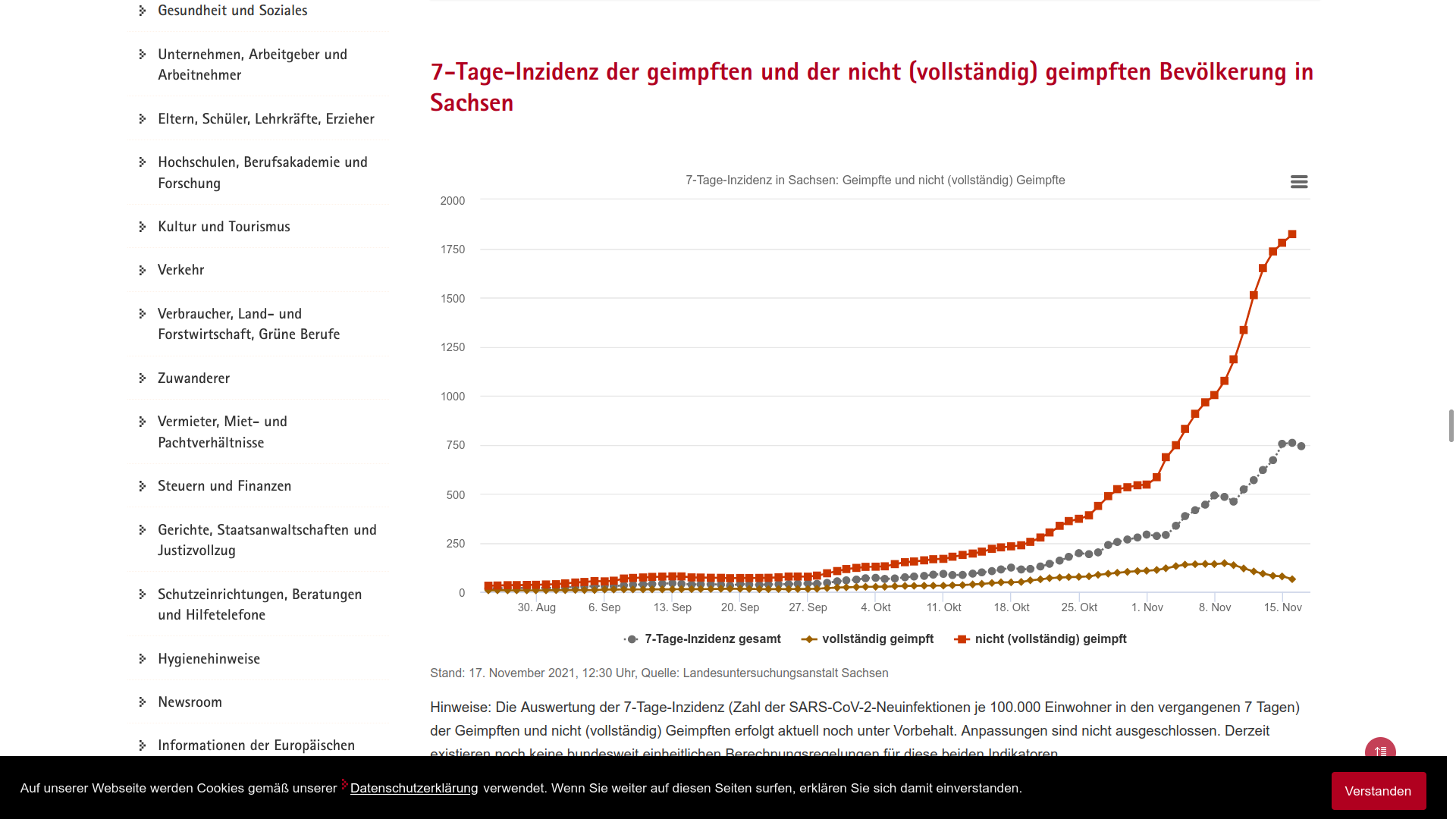 Basically it’s an amendment to our constitution which guarantees us Freedom of speech, of assembly, of movement, of religion, rights to privacy and so on (basically all the same rights as in any other civilized constitution and actually very similar to the American one). Now this new amendment is designed to take all these rights away from the unvaccinated, paving the way for a complete lockdown of the unvaxxed (like in Austria) but on top of that this new amendment is also designed so as to basically make it impossible for the unvaxxed to keep their jobs (in Austria they can still go to work). And the reasoning for all of this is that they would be a danger to themselves and others as they are the reason the pandemic is still ongoing cause as we can clearly see from the chart, they get infected like hell.

Now obviously I don’t need to explain this statistic to you guys as Chris did a great job explaining how to read statistics. So either our politicians have no clue on how to read statistics (unlikely) or they are deliberately exploiting people’s ignorance so as to take their rights away. You probably already saw the error in logic and in the statistic, right? See, it’s per 100,000 RESIDENTS. It’s NOT per 100,000 tests conducted – it’s per 100,000 RESIDENTS! Because here in Germany the unvaxxed ALREADY need to have themselves tested with a PCR test every day if they want to participate in public life. Vaccinated people on the other don’t need to get tested at all. So of course in a city of 100,000 you will have many hundreds of unvaccinated that test positive and almost no one who is vaccinated that tests positive – because the vaccinated AREN’T TESTED!

And yet people all over Germany echo the hatred against the unvaccinated that the politicians instill into them and blame the unvaxxed for the ongoing pandemic and all the restrictions and mandates (cause they claim that it would all be the fault of the unvaxxed). If Germans are that ignorant we are doomed.  And yes, sadly they are that ignorant, cause it’s not like Germans ever WEREN’T that ignorant and prejudiced and bigoted. So yeah, we are doomed *sigh*

BTW… anyone know of a country that would welcome an unvaxxed German? Preferably without visa, cause there wouldn’t be time for that, cause Germany also plans to restrict the unvaxxed from moving.

Nice work. I know that there is usually a trick when vaccinated show up healthier. Well done.

I wish I had answers.  Every day I wake up to more and more unbelievable actions.

Could you travel to someplace and get the sinovac and have it count?

How are all these countries going to handle foreign students and workers that have different vaccines?

When I read stuff like this I want to retort with, “what if they made birth control a “vaccine” against unplanned pregnancy and businesses or the government could force you to be on birth control?”  Sadly at this point I am afraid people would think that was a good idea and run with it.

Thanks, this is a great example of lying with statistics.  I fell for it with a casual glance at the chart, until I read your full post.

I’m eternally grateful to the community college math professor that assigned the short book “How to lie with statistics” and structured much of his course around it.  Life changing book that helped me immensely when it comes to critical thinking and narrative questioning.

Also, the Republic of Texas would love to have you.  It’s quite normal here, despite all the federal edicts that we mostly ignore.  Just come to Mexico and walk across the border, thousands of people do it every day.  🙂

PS – E. Goldstein, if your post title refers to a post disappearing, that’s just the buggy website or its crappy and arbitrary spam filter.  I’d be extremely surprised if anyone deliberately “censored” your post, and changing the post title means fewer people will see the very useful point that you were originally trying to make.

Come on over to the USA. Just pick a free state not a blue state. We can help you out with that if you would like. What do you do for a living? It is easier to get a visa for certain jobs. Are you of an age where you can come here on a student visa to go to school? Grad school works even if you are a bit older. Do you have any friends or relatives that could sponsor you? TX, FL, TN, IA, ND, SD are decebt states. There are more too. Just stay away from the west coast and the north east!

Well,  as MGRS said, the US-Mexico border is wide open and taking all comers. And I’m pretty sure anything you may need to get into mexico will likely be smoothed over with a 100 euro note. But honestly, if you’re going tp mexico, head south. There’s less nonsense in Belize I hear and its likely you will escape most of the coming collapse down there.

The US is too big and too resistant to authority to succumb to prolonged tyranny without fighting back, so of all the western countries, you would have better luck here than anywhere else, and we’d be glad to have you.

Emmanuel, this site often labels new posts as spam if they contain links. It’s unfortunate. Nothing to do with your content, I am sure, it’s happened to many of us.

Sorry for your troubles. It’s not much better here in Canada. There is great evil afoot in the world.

So right after I wrote my post and then wrote it again after it was (presumably automatically) deleted, I get a call from my boss informing me that I have to show proof of vaccination by tomorrow, otherwise I will be immediately suspended without pay.

BTW – I work outside by my own and have no contact with other people or other employees. Also, I already had the coronavirus and have an antibody test to show that I am immune. Also, my doctor advised me not to get the vaccine after taking several blood samples and saying that I would be prone to develop thrombosis (even without taking the vaccine). Yet still, if I don’t get vaccinated by tomorrow, I’ll loose my job. Not even the vector vaccines like Johnson and Johnson are recognized anymore. No, you have to have had at least 2 jabs (preferably 3) of the mRNA vaccine or your essentially sub-human. How did I nazi this coming?

I am so sorry Emmanuel!  I don’t have a good response but I couldn’t just scroll on by.

Not sure it is a trick, it has been known since any of the shots became available that those that have received a shot and those who haven’t are tested differently, in a way that the ones that haven’t will have a significantly higher likely hood of showing “an infection”.

The idea that anyone still accepts any of this type of data considering the CDC itself has asked for the use of the PCR test to be stopped as it is not capable of doing what these reports are telling people it does.  Which is distinguish SARS infection over the flu or any other viral infection.

I do not see any sticky’s on these forums which is a first for me, though there should be a main COVID thread that maybe goes over some things everyone should know and should keep in mind when seeing any news or studies.  One of those, until it changes, is the fact that those that have not taken a shot are being tested in a way to try and produce a higher infection rate.  again, because of how ineffective the PCR tests are, that “higher infection rate” is infection of whatever may be present.