Who is “The Oligarchy”?


This is a “google trends” on Ivermectin (blue) vs Remdesivir (red). 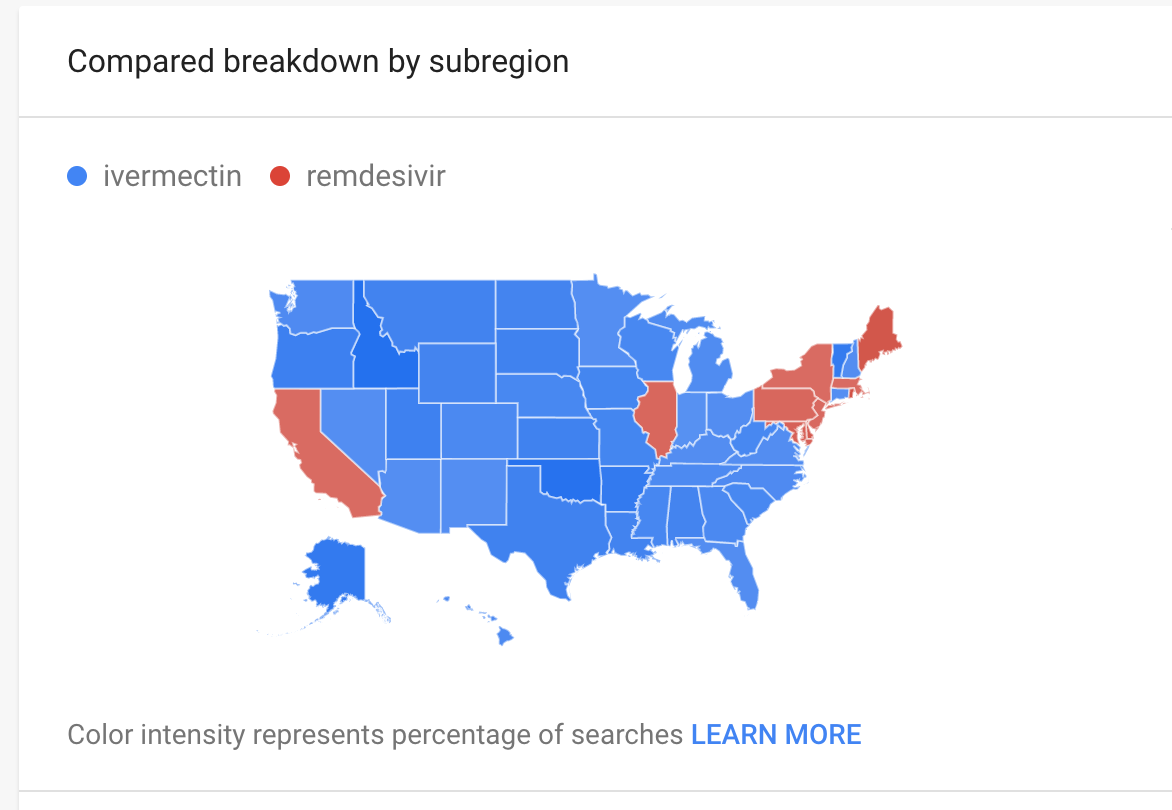 It is actually modestly good news.  “Max Narrative Control” = Illinois, California, and most of the Northeast.

Sorry if I confused everyone by making “Oligarchy” red and “Free States” Blue.  🙂  Think of it as “unification practice.”

I am struck once again by how deadly it is to believe in the mainstream narrative.  You’ll pay more (remdesivir!) to get a bunch of side effects, with no benefit.

Dave F said “But what they really fear most: when the Plebes stop falling for bullshit left-right divisive Oligarchy-constructed narratives designed to divide.  “But – gay wedding cakes!”

Yes and Yes. There are many on this site that do not yet see this…..hopefully soon. We can’t continue to allow them to divide, as they will conquer.

I’m going with Aliens dun it. They have the means and the motive.

Here, watch how good their plan is. This goes far beyond the capabilities of the naked ape. (Oh, I say! I’m so sorry about your ego, Ape)

When things don’t quite add up, my monkey mind starts trying to fill in details. That usually generates scenarios best described as “conspiracy theories.” I kept wondering why the big boyz would want to infest their support group with toxic spike proteins? Just getting rid of “the compliers” didn’t make any sense to me. That would leave behind people who really would not conform to their wishes.

I was also wondering why mRNA “vaccines” would be preferable over portions of / or dead viruses? That’s the way real vaccinations have always worked to develop immunity. At the time I chalked it up to “Hey, why not try this novel approach? We can make gobs of money with it!” So, we have an entirely new (for humans) “vaxxine” and we rushed it into production without doing the typical testing to determine adequate dosage and potential safety issues / side effects.

I read the article where Reiner Fuellmich was trying to get a handle on legal issues surrounding these experimental “vaccines.” enformtk.u-aizu.ac.jp/howard/gcep_dr_vanessa_schmidt_krueger/ Lots of head-scratchers in there. Here’s one on the safety issues and dosage. [Note, this is Dr. Vanessa Schmidt-Krueger (cardiovascular disease researcher) talking. This is a translation from German to English. Italics were explanations from the translator. Bolding from Grover.]

Ok – I’ll now come to my second point, which is determining the vaccine dose, which they were supposed to analyse in the Clinical Phase 1. There’s a Clinical Phase 1, and BioNTech has the task of not just detecting side effects, i.e. spontaneous adverse effects, but also of determining the vaccine dose. They tested three or four different vaccine dosages – 10 micrograms of RNA, 20 µg, and 20 µg respectively in two doses, and [hundertenprogramm? Inaudible] of just one injection. And then they conducted their test 34.56 and the patients were supposed to make notes in the seven-day digital diary. Basically what they found was the higher the vaccine dose – the stronger and higher the concentration of RNA – the more frequent were the side effects. Generally one can say that there were always more and stronger side effects with the second dose than with the first. Older trial participants had fewer because their immune system is already aged and is not so reactive. They naturally analysed the side effects that have been published – fever, fatigue, headaches, joint pain, myalgia, shivering, vomiting, diahorrea. Nothing more is covered in the the publication – we don’t know whether they did more. They also looked at how many antibodies were produced and then bind the spike protein: they did a binding assay and investigated the antibodies when they encounter a virus. They generated an artificial SARS-CoV-2 virus that contains a GFB [NB: “green fluorescent protein”, I think this was mNeonGreen – a fluorescent marker], i.e., cells that are infected with the virus light up green, then one can count how many green cells there are at the end. And if one then isolates the antibodies from the vaccinated trial participants and mixes them with the viruses, then they partially neutralise the viruses, and then one has fewer green cells, you can see that. So to summarise, the vaccine has a positive effect, but the criticism is that there is no positive correlation between the different vaccine doses, i.e., we see the same effect at 10, 20 and 30 micrograms. Despite this they want to use 30 micrograms as the vaccine dose. Although 30 micrograms has many more side effects than 10 micrograms. The benefits are the same, but the risk is different. This is not scientifically justifiable. If I were writing an application for an animal trial and I wanted to vaccinate the animals with 30 micrograms and I had to justify why 30 micrograms, why not 10, then I would never get past the door with my animal trial application if I got the same effect with 10 micrograms. There is simply no additional benefit if I increase the RNA volume in these assays.

So, I couldn’t figure out why the extra strong dosage. I also didn’t see anything that convinced me that 10 micrograms was the absolute minimum necessary. That was just their entry point in the trials. Would 5 micrograms work? 1 microgram? 1 nanogram? – yet they went with the strongest dose of the limited trials that coincidentally produced the strongest side effects.

The only way I could justify it (at the time) is that big Pharma can sell more product. The bought-and-paid-for regulators just let it pass because ??? Are they this lax with regular trials? Do they allow more latitude with experimental “vaccines?” It just didn’t make sense.

At least, it didn’t until I watched the video Arthur posted. Now, it makes sense. They used the strongest dose because they wanted these recipients to generate as many spike proteins as possible. (According to Dr. Fleming, 30 micrograms of mRNA cause the body to produce ~13 billion spike proteins.) If those proteins are coursing through the body, many will get exhaled or sweated or excreted – in other words, shed. The goal is to “vaxxinate” all the noncompliers when they breathe tainted air, or brush up against someone just vaxxinated.

One of the interesting features of the mRNA-produced spike protein is 5 prion zippers. A prion zipper is a series of 5 amino acids that have glycol at each end. The nomenclature is “GxxxG”. Note that the protein responsible for mad cow disease has 10 of these zippers. The protein misfolds and causes normal proteins to misfold as well. Mad cow disease is progressive, incurable, and eventually fatal.

A new review of possible unintended consequences of COVID-19 vaccines suggests that the controversial mRNA vaccines – Moderna and Pfizer – may lead to unexpected neurological conditions similar to Mad Cow Disease.

So, even if you haven’t submitted to the shot, you may still be inadvertently infected by these zipper spike proteins. If so, and if you’re susceptible to them, you could get brain degeneration that will end your life. Dr. Fleming said that based on humanized-mouse studies, 95% of the mice died or were euthanized within 2 weeks. Autopsies showed the dead mice all had spongiform encephalopathy. His estimates were that 2 weeks in mice equates to ~1.5 years in humans. Better get ready!

Could the oligarchy infect all of us without getting infected themselves? What if there were some treatment to keep these prions from becoming a problem?

[I’m having trouble posting this article. I don’t think the PP algorithm likes something I’m doing. The other parts came through, but this one isn’t. It’s the most prescriptive! I’ve copied the entire abstract. One needs to log in to see the rest of the paper.]

Is this what they are doing? Are they taking a prophylaxis to prevent the prion-based brain degeneration? Where can we get this “2,2′-biquinoline“?

Meanwhile, I suppose its time to enjoy a gin and tonic – especially after getting exposed to “vaxxed” individuals.

[Note to PP Team: This is the 4th time I’m posting this rather longish post. The first time, I got redirected to a “Captcha” to prove I’m a human. Then, nothing happened. Since I’ve had issues with my posts not showing up, I always copy my posts to my computer buffer before hitting the “submit” button. [BTW – contrarians hate to submit to anything! Can you rename it “Post message”?]

So, I copied my text into the window and had to relink and reformat to get the text to show up as I’d like. Then, I tried posting again. Since the second message was almost exactly like the first message, your anti-double posting algorithm assumed I was trying to post the message again. Obviously, the algorithm could see my writing behind the scenes, so it must exist for the rest of the world. These kinds of “undocumented features” are considered to be bugs in the code by run-of-the-mill users. For the 4th iteration, I’ll split this into 2 parts.

On the 5th iteration, it took Part 1. Part 2 was not accepted. This time, I broke the link to the “National File” article. Let’s see if the confuser accepts it this time …

Nope. On the sixth iteration, I didn’t include any active links. One of the articles must be considered egregious. This is getting ridiculous.

So, up to 7 tries. I tried separating out the part 2 and 3 with the hyperlinked articles. We’ll see if this is the problem.

On try #8, I put spaces in every letter of the link and left it unlinked. Hopefully, this will get it posted.

Try #9 was the winner. Apparently, I crossed an invisible line when I cited a paper from pubmed. Either that, or I just wasn’t holding my tin hat tight enough.

When I hit the “submit” button on the third time, I noticed the redirect notification at the bottom my screen said it was waiting for facebook to respond. It did it again on the 9th time. Is this just a cruel joke?]

I had great difficulty with my recent post #55 in “Nuremberg 2.0”. I tried many iterations. Final post not quite formatted as well as I would have liked, but I dared not touch it, since other efforts at editing wiped it out and I had to start over repeatedly. I finally learned to copy my post each time before hitting “submit”, as Gover suggested above.

Here’s the report from Dr. Fleming that shows what happened to the mice after being infected with the coronavirus. Note that the sequential numbers are line numbers from the report. Also, note if you read the report, there are highlights in yellow and red text. I assume these notes are from Dr. Fleming. Also, I mentioned that 2 weeks in mouseville is about 1.5 years in humanville. I got those numbers from one of his videos where he was trying to put these data into humanesque perspective.