What would be the price of oil if we had "normal" interest rates?

The US shale industry as a whole supposedly has not yet produced a profit, although interest rates haven been at historic lows for most of its existence. So I wonder if there would be any shale industry at all if interest rates had returned to historic averages after 2008. Given the sheer volume of shale production today, one wonders just what the supply situation and corresponding price would be today without it.

Anybody aware of any analysis somewhere about the relationship of oil price and interest rates in the age of shale?

Anybody aware of any analysis somewhere about the relationship of oil price and interest rates in the age of shale?

No, I’ve not seen that analysis.  But it would fascinate me.  Of course there would be several dozen very important assumptions that one would have to adopt to make such an analysis.

There was a recent Bloomberg article that took a sideways swipe at this topic.

Here are two charts from that which I think give us the ability to say “oil prices would be a LOT higher if shale drillers had not had access to too-cheap capital:” 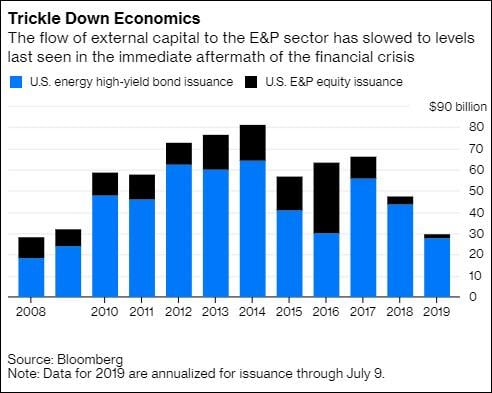 First, we see the massive amounts of capital that flowed into the shale space.   These are truly massive.

Next we see the impact that had on oil production. 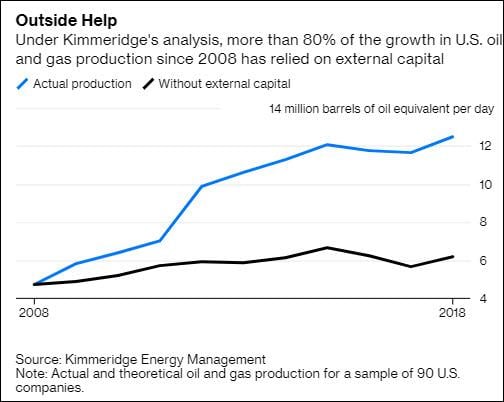 I don’t know what all the assumptions are here to develop the above chart, but let’s assume it’s roughly correct.  This means roughly 6 million barrels per day of oil production would be missing from the global landscape if outside capital had not been brought to bear in the shale patch.

However, this is a multi-factor problem to model.  I believe the above chart is a single-factor chart answering the question “how much drilling and production did all that capital fund?”

If that 6 Mbd were missing, then global oil prices would be a LOT higher.  Those higher prices would have then allowed the shale patch to enjoy vastly higher cash flows, which would have supported drilling and production.

However, it’s safe to say that if the shale patch had to rely on higher prices to fund operations they would have had to move a a lot slower of a pace than with thin-air funny-money.  So, less oil production, generally higher prices.

…which…would have crimped GDP by a lot, which would have depressed demand thereby pushing prices back down too.

This is a very tricky thing to model because we don’t really know the relationships between all the variables.

At a higher level, though, we can say there’s a price of oil which is too high for an over-leveraged globe to afford (a ceiling), and an oil price that’s too low to fund oil discovery and extraction (a floor).

The floor and the ceiling draw ever nearer and once they touch, only money printing that reaches Easter Island levels of delusion can keep the game going any longer.

If/when that happens, there will be people at the margins, as I’m certain there were at Easter Island back in the day, observing “hey, this doesn’t make sense, maybe we shouldn’t be doing this?”

It always struck me that at the very time interest rates got pushed down to zero around 2008, US shale production took off and the long-term rise of the oil price was suddenly arrested. (Of course it’s far more complex; nevertheless the coincidence was rather convenient.)

It may very well be a rational course of action to keep interest rates low for no other reason than enabling continued shale production, at least for somebody who doesn’t care what happens after they are out of office.

I like your picture of a narrowing wedge between floor and ceiling, and wonder whether one could guesstimate what the parameters for the lines are.