Usually I avoid the Guardian as far too pro-narrative, but if one wanted to follow vaccination rates and trends I guess that page is rather informative.

I’m in NSW now but I’ve spend a lot of time in the ACT and the vaccination rates there a staggeringly high. I haven’t really heard of vax mandates there and one would have thought that there might be a few more intelligent people there (as the level of education at least is comparatively high) to keep the rate down, but seemingly not. I’m wondering whether I might have to retreat to there if things get too bad here. At least there might be lots of vaccinated people to hide amongst there.

Regarding the additional deaths, yes, that’s quite interesting and seems to be the right direction to support the mass vax injury/death hypothesis. Various whistleblower undertakers/funeral directors, posted on this site, seem to be reporting much the same sort of thing in the UK.  Certainly, the rollout has been comparatively slow in Australia, so the more recent the data the better. Also the later shots are the more dangerous, at least for Pfizer. I guess the shorter term causes of vax death are likely to favour coronary conditions, longer term, coronary, cancer and mad cow.

not being reported as they are “not related to vax”…

Clive Palmer (United Australia Party) to Skerritt: We will see you in court

Craig Kelly: Huge Surge in Myocarditis and Pericarditis (Thanks to US Strength! @us-strength) 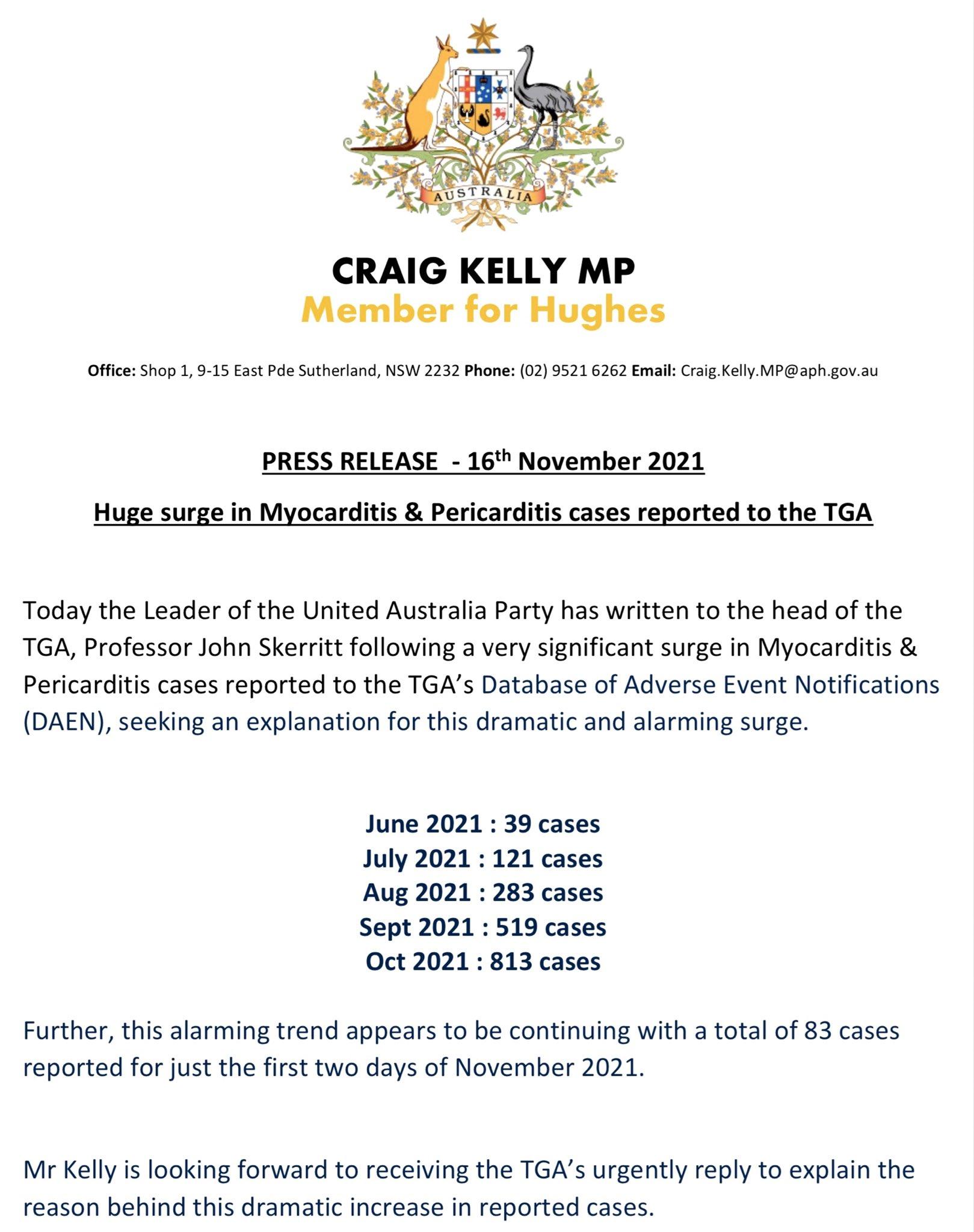 The Normie  in the background reminds me of myself when I first found out that vaccines were harmless at best. Harmless snake oil. (The one trotted out in the Spanish flu was far from harmless.)

I had a meltdown. “What about the polio victims?” I screeched, my blood-pressure at an all-time high.

I don’t want the Politicians who forced these clot-shots on the children out of office; I want them pilloried and then have the full weight of the Law upon them.

The Nuremberg code is not the only Law that they have broken. Not by a long shot. (Don’t tell them just yet. Sing them a lullaby)

My crystal ball says that medicine is going to be radically changed after the Big Expose. Doctors are going to have to go back to school for deprograming and to be instructed in the true meaning of their oath.

Thanks everyone, for your contributions!

Five Coalition senators (up from the two discussed here) backed Pauline Hanson’s bill to end vaccine discrimation and mandates.  Needless to say, it didn’t pass given the opposition of the major parties.

Also Jacqui Lambie has come out as a vaxxor.

At present, it seems like the original four senators are still blockading the Australian senate.

Jacqui- very pedestrian response, as we know by choosing not to vax one is no more putting vulnerable people at risk than a vaxed person carrying a high viral load.

HP- suggest Jacqui educates herself pronto and any chance Clive wants to sell some of his hydroxychloroquine he acquired?

It’s great to see you. I saw your other post about your plans to resign a bit late to reply to it. I certainly hope you are better.

I came to this thing a bit to late to have heard about Clive’s huge stash of hydroxychloroquine. I didn’t know he was that generous to be honest.

It looks like the whole vax mandate thing is going to be a central battleground in the coming federal election with Andrews (and to a lesser degree the other Labor Premiers and federal opposition) really intent on demonizing the unvaxxed as ‘violent extremists’. Also the MSM, of course, who seem to have no problem at all with coercion.

As much as this is looking increasingly nasty, it is probably a good thing, because it at least makes more sense than everyone just falling in line so that is becomes a non-issues as seems to have occurred in the Canadian federal election.

I certainly hope this politics of hate doesn’t triumph, but, I have to say, Victorian politics seems completely incomprehensible to me (and probably a lot of other people):

Anyway, I might try to listen to some Kroger as to what is going on down there. It’s interesting that he still seems to be around. I’m afraid I have little familiarity with Victorian politics.