Jen Psaki made a statement that employers are still encouraged to have their own mandate.

Yep defeated  and Nike and Columbia sportswear are firing workers this weekend anyway.

… Nike and Columbia sportswear are firing workers this weekend anyway.

That means it is time to start organizing boycotts.

You would think these corporations would have decent lawyers to give them a heads up without a presidential mandate to cover their actions they are actually violating a little thing called the Nuremberg code and completely on their own .. https://en.wikipedia.org/wiki/Nuremberg_Code

or at least a decent marketing staff to give them a heads up  if the court of public opinion swings “”which it looks like it might with the Fauci Darpa paper leaks”  they  might see their  Nike “Swoosh” photo shopped all over the net into something that resembles a an X with bent ends..    Could ???  be bad for the bottom line….

Really not a total victory, though i agree with the primary reason that it doesnt limit the spread.    However,  wait we will get a mandated vaccine for a new virus that it does limit the spread.    What still needs to be addressed is ones right to a medical procedure when it is especially dangerous and not rigorously tested.    I do not think they can mandate under any case even if every single person on the planet was dropping dead, which is what they are after.   There will be war eventually over this.

A Biden staffer’s smug retweet about using the OSHA mandate as a work‐around for mandating vaccines federally is quoted in the supreme court ruling. 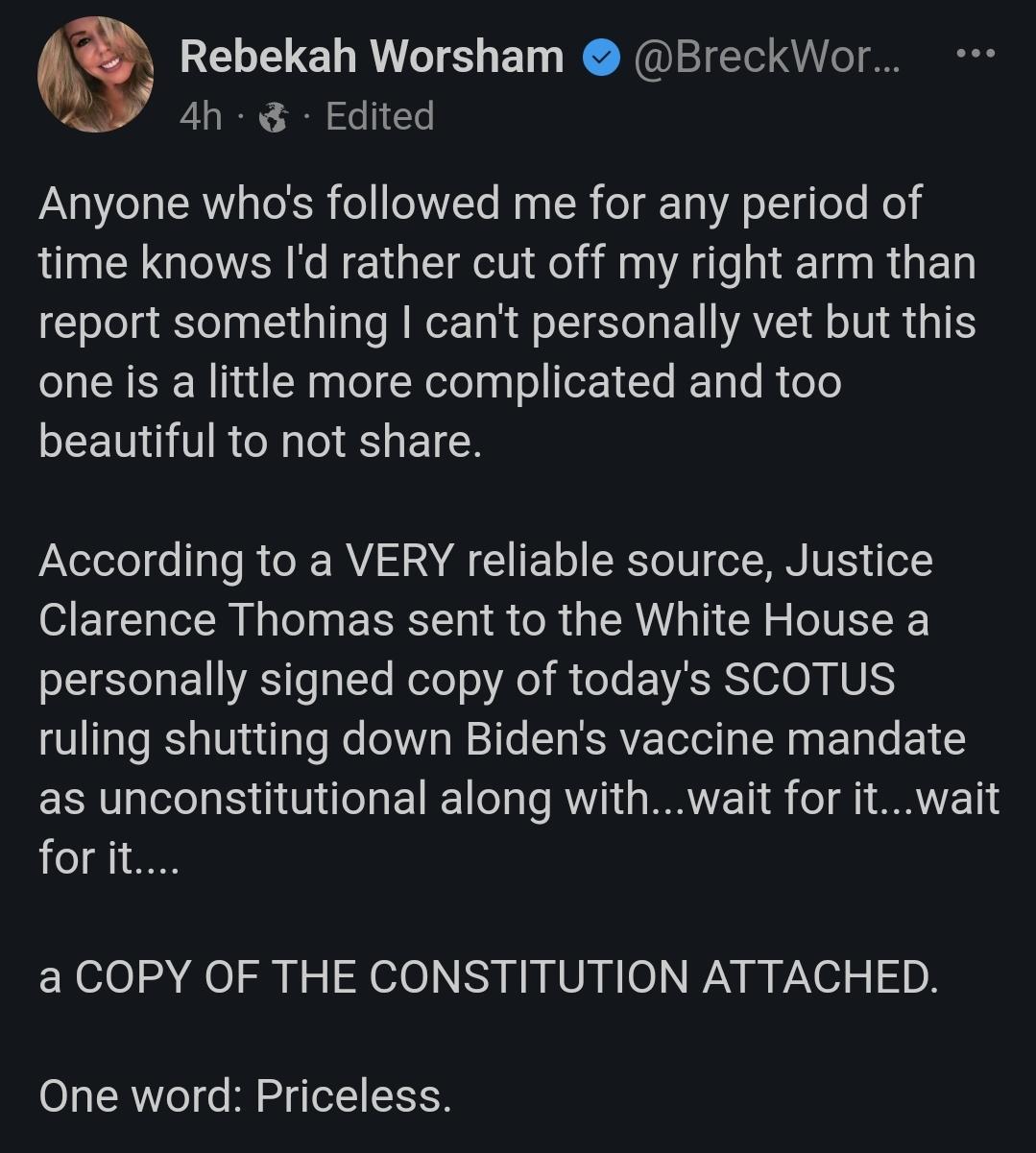 This story may well be true, since Clarence Thomas has every reason on earth to personally hate Joe Biden:

Decades ago Senator Biden was in charge of the Senate Judiciary Committee for Clarence Thomas’ confirmation to the Supreme Court. Biden personally took Thomas aside and assured him that there was nothing personal, then orchestrated the Anita Hill slanders. Under enormous pressure, President Reagan stood by Thomas. After a night of prayer with his wife and friends, Thomas assured Senator Biden and the Committee that he would rather die than withdraw his nomination in the face of what he said was a high-tech lynching, and forced the confirmation vote. Thomas has stood up to the left ever since.

I had hoped Kavanaugh would learn by his example. No such luck; Kavanaugh was gelded by the left, as they hoped.