I have noticed a strong message ramping up recently re unvaccinated being demonized. How perfect for the puppet masters. “Hold them down and force the jab” will be the mantra. The unvaccinated are accused of spreading the delta variant and clogging up the hospitals. For the proponents of forced vaccinations will have easy access to MSM to spread the message. And for most, fear and self-preservation will drive it with the sickly sweetness of it “being for their own good” to help wash it down.

I think my time left on Earth is pretty short.

I shall never submit to any forced mRNA “vaccine,” while I am still alive and conscious…ever.   I know too much.

You do realize that if they do force people to get jabbed, meaning fighting them into submission, holding them against their will, and injecting them…as they struggle against it…what will be injected into them need not be the same serum they inject into the “willing.”

After all, if they had to use physical force upon you, what might you do…once they release you from your forced injection?  Might you not seek revenge for being injected with a known poison?  Might not you hunt down those who injected you?  Might not you consider retaliating against their instigation of force against you..with even greater force, lethal force?   I know I would.

If it is all over, but for the whimpering…I suggest taking as many with you as you can…while you still can…and kiss off any hopes of living peacefully, or for very long.

I think that TPTB have hit a wall. All of the willing have complied and so now come the threats. As was mentioned in an earlier thread by someone else, they need to remove the control group.

I tune out of the negative stuff and focus instead on what I can do. I am due to undertake Common Law Constable training this month with a view of banding together with likeminded people. Remember, most of this stuff is psychological – they are trying to grind you down. Seriously, tuning out is so important – fear is the mind killer (to quote one of my favourite sci-fi novels).

I think we will know pretty quickly how this is gonna go down.

The leaked CDC slide deck annihilates any pretense of Covid being ended with these leaky vaccines.  All the local and national news that I read haven’t made a peep about these developments or vaccination generally for a few days now.

It feels like they are waiting on direction from those higher up the chain.  Fauchi et al are working out the new messaging.  My prediction is the new message will be:

“It’s time to take it. We’ve tried to be patient with you but you won’t take it. F*ck you, just take it.

I still think its all about buying time and being in a locality where the local authorities resist the messaging coming from higher up.  In my province they have dropped almost all restrictions recently.  I don’t know how long they can stand against “The Science”, but so far no vaccine passport type system.  They could be lying too of course but it feels like I will get few more months here than in some other places.

…this thing could go kinetic in a number of ways.

2. When the duped realize their plite!

We just came back from 2 weeks away from Vancouver and we are in the minority in regards to mask wearing in the grocery store (not so in the gym though). Not sure what Bonnie Henry said but she got the Sheeple panicked again.

I look to the UK and France for mass resistance in regard to 1. as well as the USA…..as they’ve got lots of guns.

Wotthecurtains – hopefully Kenney can maintain his new policy in Alberta. He must be under huge pressure to cave.

I work in property management in a building whose main tenant is Amazon. If WAPO is publishing the leaks in Bezos’s own propaganda rag, I may have a chance of escaping the vaccine and remain employed. A slim one at this point, but at least a glimmer of hope remains for me at least.

If the narrative falls apart we here in the US it will be very difficult to maintain the ranks globally. If Bezos isn’t part of the oligarchy, then who is? If the US government is making threats against social media monopolies, then I expect Zuckerberg and Google to follow suit and the information war will be lost. But my worry is that we only know who the pawns are, and the way the European Union countries are behaving it seems more likely that the US is only the sponsor of the virus and vaccine, not the vested oligarchy that designed the plan.

A conspiracy is safer the more culpability the agents have. If the conspiracy started in the fourth reich, they would pay lots of money to ensure it looked like the US was integral to the execution. The US would make sure China looked responsible, and China would ensure dissidents were responsible. Each conspirator ensuring the evidence pointed to someone else. So what happens when the links in that chain start to falter? What if the US agents can’t tip the vaccinated population into the majority before the information war is lost? What is the consequence? I think we’ll see a shift in global politics and the US, for all its native defiance, will be the target of the conspiracy. The monarchs of WW1 were all cousins remember, so there’s nothing that says the blood of the masses isn’t worth settling a petty family dispute, nor the wealthy protecting their ancestral and ill gotten fortunes.

My worry is now both that the conspiracy will evaporate before we know who created it only to face the same battles a few years from now, and/or the cost to the rest of us for the conspiracy to stop the hemorrhage of truth. I think either way we’ll need to be prepared for deteriorating global social, political, and economic conditions with a very predictable outcome.

Either way, the unvaccinated will remain in the crosshairs however it plays out. But something tells me force is coming and it will take more than the compliant bureaucrats and troops in the US to “force” anything. I expect the Biden administration to invite the UN to assist in that effort.

Yes, the messaging has really ramped up in the past week. I’ve had to tune out a bit to the MSM and social media for my own sanity. Also, I’ve been busy with other things. My sisters are in agreement with vax passports apparently not realizing how dangerous it is to open that Pandora’s box. My co-worker just complained to me on the phone about the director of the Kid’s Club where her 18 year old son works not being vaxx’d (since she works with kids). She knows I’m not either and called this lady irresponsible and ignorant. Even the local large medical center gives misinformation in their FB page and comments. This is from last Thursday July 29, 2021: 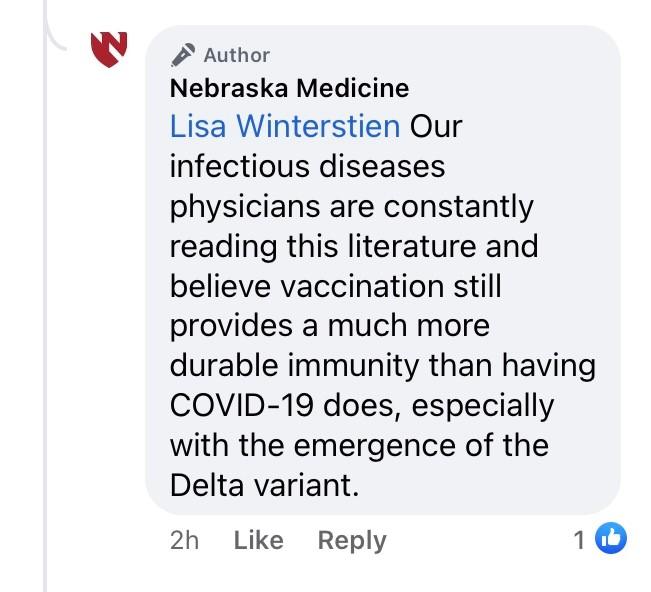 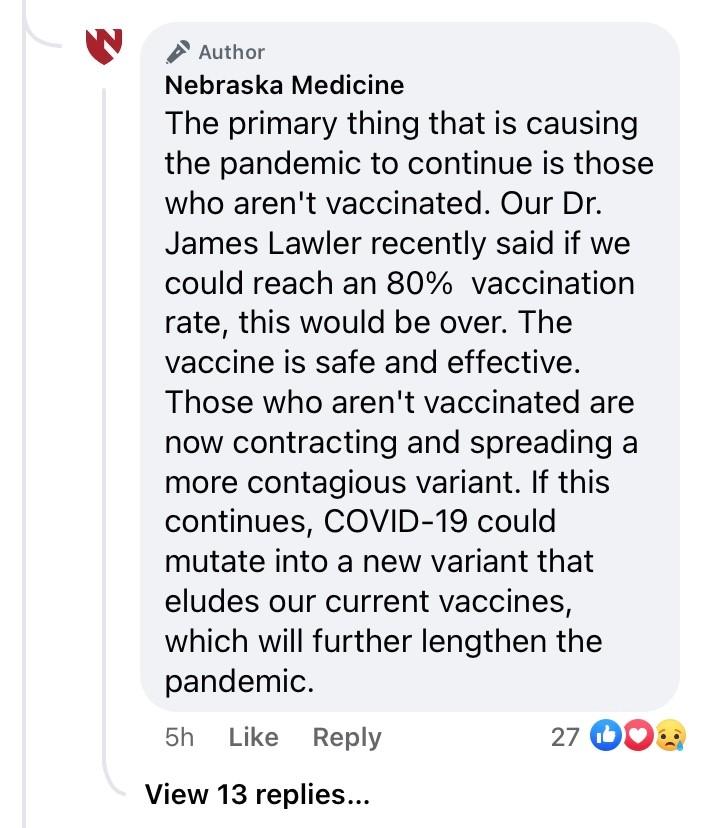 Of course, according to them the unvaccinated are the ones prolonging the pandemic!! (eye roll) Ivermectin anyone?? That would have ended it months ago. Of course all the people discriminating and slagging off the unvaccinated are self proclaimed SJ warriors. It’s very maddening and frustrating! Feeling my blood pressure rise now just thinking about it. Just trying to get along day by day at this point.

“It’s time to take it. We’ve tried to be patient with you but you won’t take it. F*ck you, just take it.

One thing is certain, “they” have managed to convince a large percentage of the population of this already. I see more and more comments across social media where people are saying this almost word for word (“let them die in the streets”, “don’t admit unvaccinated people to hospitals if they get sick”, “force them to get the vaccine” etc). This includes many medical professionals, scientists (virologists), etc. It’s kind of scary.