This being the 5th of November in the UK, drawing you to this film is very important to me. I hope that the highlighted link will work in whatever country you reside in, and that you comprehend the valuable message that it offers :- 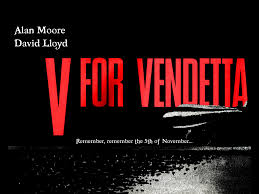 In the near future, Britain is ruled by Norsefire, a totalitarian government. Evey Hammond, a young woman who works at a TV station, is rescued from an attempted rape by members of the secret police by a Guy Fawkes-masked vigilante known as “V”. He leads her to a rooftop to watch his destruction of the Old Bailey. Norsefire publicly explains the incident as a planned demolition, but V exposes the lie by taking over a state-run television station the next day. He broadcasts a message urging the people of Britain to rise against the oppressive government on 5 November, (in exactly one year’s time) by meeting him outside the Houses of Parliament. Evey then helps V to escape the TV station, but is accidentally knocked out in the process.

V brings Evey to his lair, where she is told that she must stay in hiding with him for her own safety. She stays for some time, but upon learning that V is killing government officials, she escapes to the home of one of her superiors, Gordon Dietrich. When the state police later raid Gordon’s home (after he satirises the government on television) Evey is captured. She is incarcerated and tortured for days, finding solace only in notes passed to her by another prisoner, an actress named Valerie, who was arrested (and experimented upon) for being a lesbian. Evey is eventually told that she will be executed unless she reveals V’s location. An exhausted but defiant Evey says she would rather die, and is then released. Evey discovers that she has been in V’s lair all along, and that her imprisonment was staged by V to free her from fear of the fascist government. The notes were real, but they had been passed to V when he was similarly imprisoned. Although Evey initially hates V for what he has done to her and leaves him, she promises to return before 5 November.

Meanwhile, Inspector Finch of Scotland Yard, through his investigation of V learns how Norsefire came to power and about V’s origins. Fourteen years previously, Britain suffered from war and terrorism. The ultra-conservative Norsefire party led a reactionary purge to restore order and “enemies of the state” frequently disappeared. The country was deeply divided over the loss of freedom until a bioterrorist attack occurred, killing a large number of people. The fear generated by the attack allowed Norsefire to silence all opposition and easily win the next election. A cure for the virus was discovered soon afterwards by a pharmaceutical company (later discovered to have close links to Norsefire). With the silent consent of the people, Norsefire turned Britain into a bigoted totalitarian order under the now Chancellor Adam Sutler. However, the viral catastrophe had actually been engineered by Norsefire as a ploy to gain power. The virus had been engineered through deadly experimentation on “social deviants” and political dissidents at a detention center in Larkhill. V had been one of the prisoners, but instead of being killed by the experiments like all the others, he gained heightened mental and physical abilities. V eventually destroyed the center and escaped, vowing to take revenge on Norsefire’s regime.

As 5 November nears, V’s various schemes cause chaos in Britain and the population grows more intolerant and subversive towards Norsefire. On the eve of 5 November, V is visited again by Evey, and he shows her a train in the abandoned London Underground which he has filled with explosives to destroy Parliament. He delegates the destruction of Parliament to Evey, believing that the ultimate decision should not come from him. He then leaves to meet Party leader Creedy who, as part of an earlier agreement that would solidify his own power, has agreed to bring Sutler to V in exchange for V’s surrender. When Creedy kills Sutler in front of V, he demands V’s surrender, but V refuses and is shot multiple times by Creedy’s praetorian guard. However, V survives due to his extraordinary strength and the cast iron vest he is wearing, and kills Creedy and his men before they can reload their weapons. Mortally wounded in the fight, V returns to Evey to thank her. He dies and his body is placed upon the train, presumably by Evey, surrounded by Scarlet Carson roses.

Evey begins to send the train down the track when she is discovered by Inspector Finch. However, Finch, having learned much about the corruption of the Norsefire regime, allows Evey to proceed. Meanwhile, thousands of Londoners, all wearing Guy Fawkes masks but unarmed, march on Parliament to watch the event. Because Sutler and Creedy are dead and unable to give orders, the military stands down in the face of a civil rebellion, and Parliament is destroyed by the explosion, accompanied by the 1812 Overture. On a nearby rooftop Evey and Finch watch the scene together and hope for a better future.

[Moderator’s note:  This thread has been moved to the CT folder because it has no direct relationship to the 3E’s.]

What a bunch of crap!  It shows the sites obvious misunderstanding of all 3 E’s IMO.

. but I know you love history VF.. so have this vid from one of my favourite youtubers.. many, many rich rabbit holes to explore..

Since we’re in the occult (=hidden) part of CM.

All truth is connected – plato1965

My fellow smoker, you have produced for me a veritable cornucopia, and a feast for the eyes!!!

Have a play with this book. It’ll totally mess with your mind …

Only for you, children of doctrine and learning, have we written
this work. Examine this book, ponder the meaning we have
dispersed in various places and gathered again; what we have
concealed in one place we have disclosed in another, that it may be
understood by your wisdom
—Heinrich Cornelius Agrippa von Nettesheim, De occulta
philosophia, 3, 65

the ones and zeros of all our fears… are met in thee (omega) tonight..

V for Vendetta doesn’t appear to be available at any of the links on this thread or the other.