There is a fascinating animation of VAERS death reports with the vaccination doses in the background posted on https://vaersanalysis.info/2021/07/29/time-lapse-series-of-vaers-death-reports-accumulated-over-time-for-covid-19-vaccines-updated-through-7-23-21/ .  I’ll post the first and last image here, but please follow the link and watch the animation.  It will give you a much better feel for how terribly backlogged VAERS must be. 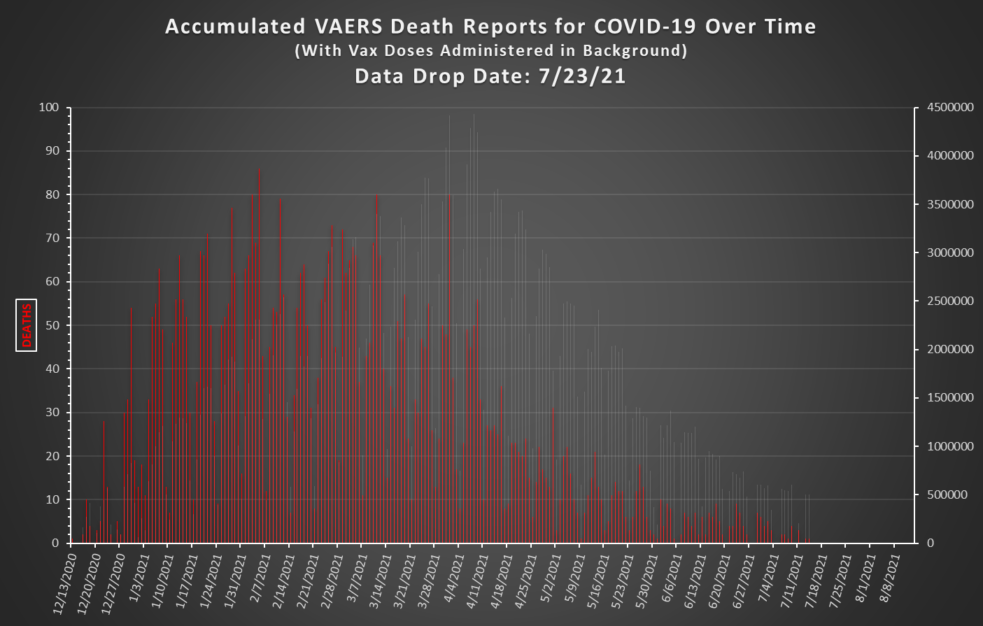 There is no possible way that the deaths could be declining at the very point when the rate of administration of the vaccine doses was at a maximum, yet that is the current situation based on the VAERS reports.

I think you are misunderstanding the graph. If you let it go through the red lines get bigger every refresh. So I think what is happening is that say on May 9th, you will get additional deaths that have been added to vaers from vaccines received on days previous to May 9th. So lets say on May 8th a person submits a vaers report for a death that occurred May 1st but the vaccine was given on March 25, then the March 25 line will increase on the May 9th data refresh. The deaths are measured in tens and the number of vaccines are in the 10s of thousands.

Friedrichs_teeth, if there were no backlog in VAERS reporting, wouldn’t the timing of the peak in the red lines (deaths) match fairly closely that of the gray lines (vaccine doses)?  The peak in the gray lines shows that the maximum number of doses were being administered in early April.  Thus, the maximum number of deaths would have to be after early April, because one cannot die until after they have received the shot.  But the red lines show that the deaths are being reported mostly for dates prior to early April.

I think that just means that it takes a while for people to die from the vaccine and then to have that death updated in vaers. Am I answering the right question?

So, in essence I am saying that the days when they gave out more vaccines will continue to go up in deaths until they eclipse the earlier dates. We just haven’t left enough time for the really sick to die. That sounds really bad. I’m sorry.

Oh, BTW I am uncucked_canuck. I changed my name due to all the other canucks running around and confusing people.

Most people die shortly after receiving the vaccine.  Here’s a graph from https://vaersanalysis.info/2021/07/23/vaers-summary-for-covid-19-vaccines-through-7-16-2021/ showing that fact:

From early April until now is well over 100 days.  That is plenty of time for the deaths to have shown up in the record if there were no back log.  Yes, all this talk about deaths does sound really bad, but you don’t need to  apologize.  Better to talk about the deaths than ignore them and sweep them under the rug and pretend they don’t exist.

Interesting.  I know I saw the early deaths going up all the way along. So either, the deaths happen soon but get reported late OR the short little bars add up to at least half of the big bars over time. Or some combination.

I don’t think that this is necessarily true. I tend to believe that only deaths occurring shortly after vaccination are reported as deaths due to vaccination. In past posts people have mentioned people dying a month after vaccination due to heart issues and the doctors discussing whether it was due to the Vax and then deciding not to report it.

Take Hank Aaron as an ironic example. He took the vax to prove that it was safe. He died 18 days later from a heart attack. Knowing what we know now, that was most likely due to blood clotting, yet they reported that it was not related to the vax. I suspect his death was not reported.

I have mentioned before that during the Moderna approval meeting with the FDA, the Moderna folks said that they had two heart attack deaths and one due to liver disease complications. I suspect all three could have been due to blood clotting, yet the Moderna folks stated that they determined they were not connected to the vax. How convenient.

In the context I was using that statement, I mentioned a time frame of 100 days, which is probably far longer than what many would consider “shortly.”

The combination of post 1 and 5 show that VAERS is signficantly backlogged in their reporting.  Sufficient time has elapsed since the peak of vaccination dosing, which was in early April, for VAERS to have captured most deaths from vaccination in April.  They have so far shown only a few deaths.

There is a whistleblower who has come forward and claimed that the number of deaths is closer to 45,000.  This is now part of a federal lawsuit.

The lawyer who filed that lawsuit, Thomas Renz, was recently interviewed by Mike Adams of Natural News.  Thomas Renz doesn’t hold back.  He makes many surprising and rather explosive statements.  Here is the link to that interview: