Thoughts on US Fuel Use Decline

Just curious to know your thoughts on the stagnate demand.  Is it the oppressive administration?  Is it the recent cost increase?  Is it overall better fuel efficient vehicles?

Just curious to know your thoughts on the stagnate demand.  Is it the oppressive administration?  Is it the recent cost increase?  Is it overall better fuel efficient vehicles?

I’m providing some charts that I think may be helpful to this discussion. It is stuff I shared a couple of weeks before in this community.

That said, I have to wonder what kind of “oppressive administration”  would want to raise gas prices and stagnate demand in a contentious election year at a time of record low popularity ratings.

First let’s start by looking at domestic oil production figures at monthly rate from 1920 to now. As you can see in the chart below from the U.S. Energy Information Administration, since the 1971 peak, and a second, lower peak around 1986, production has generally followed a declining path.

Until around 2009, when it started climbing again. Obviously the overall long-term trend is still down, as explained by peak oil and the Hubbert curve. No one can reasonably make the case that Obama is contributing that downward trend.

(In fact, here’s a report on well drilling permits applied for and approved by the Bureau of Safety and Environmental Enforcement: http://www.bsee.gov/Regulations-and-Guidance/Permits/Status-of-Gulf-of-Mexico-Well-Permits.aspx, showing that Michelle Bachmann was lying when she said back in March 26, 2011, “One. That’s the number of new drilling permits under the Obama administration since they came into office.” There have been many dozens of new wells permitted since the BP Macondo disaster just in the Gulf of Mexico alone, and there were more allowed even before that tragic disaster led to a temporary moratorium on drilling. But that’s how talking heads like to mislead us, right?)

And here’s another chart on U.S. monthly crude oil and petroleum imports since 1980.

I’m not really defending Obama (I have almost as much dislike of him as I do Bush or McCain or Romney, etc.). I think we would have had similar well-drilling increase under any president, driven as they are are by the oil prices of today’s post peak oil economy and the power of the oil industry lobby.

And I think we would also have had similar oil import reductions under any president. Factors being: increased domestic production, higher oil prices, and the economic downturn we are still in (and likely will continue to be in for the rest of this decade and beyond, regardless of who is in office, unless we have yet another bubble like the one Bush, Greenspan, and the banks helped manufacture).

Exports
FriscoMike, one thought I had was, what’s REALLY causing prices to go UP, despite increases in domestic production and significant drops in refinery deliveries to U.S. service stations? Could it be exports? I checked just now and found this.

These are very rough figures, but if we’re producing more, while both using less and importing less, it does seem like perhaps the explanation is exports… Perhaps it makes sense for a business to sell to the highest bidder, whether at home or abroad, especially when Middle East tensions are high. Do you think the current administration should try to stop this?

Your explanation…especially followed with your closing statement has really added clarity to my thoughts.

I have another chart that I had a hard time finding, but I just found it. Retail sales are falling like crazy. Looks like to early 1980s levels. That’s very significant, considering we’re going back to those levels. What’s scarier? We had 80 million fewer people back then (233 million then, to 313 million now).

More (semi-rhetorical set of) questions: Since we know that producers and refiners will logically sell excess capacity to the highest bidder, including other countries (hence the export chart) rather than use that excess to increase supply and thus reduce prices at home, should we really continue the billions in tax credits and subsidies that they enjoy? And does increasing drilling in the United States (i.e. “Drill, baby, drill!“) truly benefit Americans with lower gas prices?

I seem to remember interesting charts showing rail and truck transport statistics for the US as well as container movements at ports being posted on CM in the past.  Does anyone know where to get current figures?  I would be interested to see how much freight is being moved around the US to see if it is falling off at the same rate as gasoline consumption. 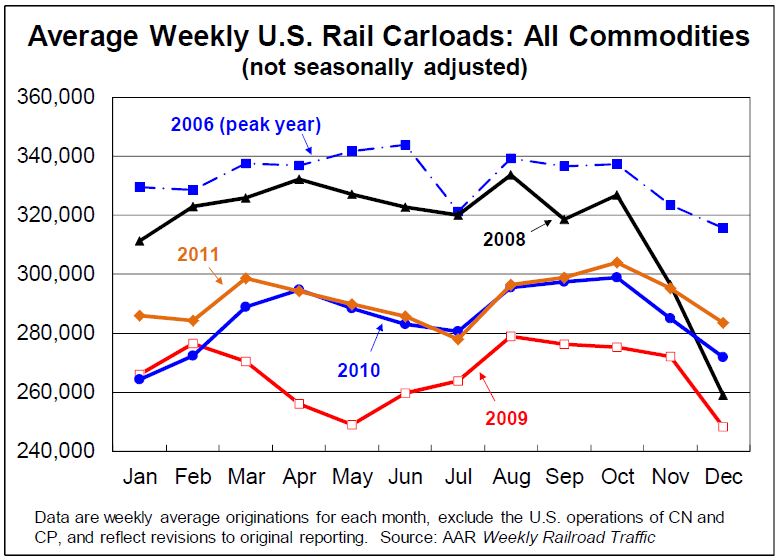 I seem to remember interesting charts showing rail and truck transport statistics for the US as well as container movements at ports being posted on CM in the past.  Does anyone know where to get current figures?  I would be interested to see how much freight is being moved around the US to see if it is falling off at the same rate as gasoline consumption.

I’m glad that you brought up the subsidies.  This has been a hot topic this week as the hardcore conservative bunch have hand-picked some of Obama’s statements to make a point.  Essentially, stating that the billions being handed out today in depletion subsidies is only impacting the smaller independent drilling companies.  My argument would be two things – why do the independent drilling companies need incentives to explore as wells become less productive?  Wouldn’t the incentive be that the less oil they produce, the less cash input they have coming in?  Are the subsidies there only to maintain employment?  IOW, shouldn’t the market drive the independents to drill more?

Can you or anyone add or help me understand this new subsidies argument?

My thing is that I don’t want this to be an excuse to not subsidize the alternative energy sector.

Let me ask myself—-Is that even a valid question?

Are we being just a “little myopic” in thinking that that U.S. drivers drove less in 2011?  So that matters?

I really don’t think people grasp the severity of this.  We gave our jobs to China and they bought cars….  There are 1.3-1.6 billion Chineese.

In 1990 there were 5.5 million cars [please note cars not vehicles that consume gas/oil, just cars] in China

In 2011 there were 200 million vehicles [not cars alone, but trucks, busses, cars, suvs, motercycles, & rvs] in China

Do I really care what (as CM would say) ‘China’s [poplulations] rounding error’ [US drivers] drove in miles?  Well, other than the roads are less croweded—Uh nope.

Reading through this thread reminds me of the Lovin’ Spoonful song “Did you Ever Have to Make up your Mind?”.

A few years ago, the mantra was that “cheap oil” was going to be our ruin as it stimulates overconsumption and waste.  Now, consumption of gasoline is down, but we’re hearing a lot of complaints about the price getting out of hand.  There is a thing called supply and demand.  When the price goes up, then consumption of that item declines.  Comments such as “should the administration try and stop this?” are at minimum an odd thing.  Stop what?  Reduced consumption?  Increased prices?  Peak Oilers who frequent this board should be pleased that consumption has declined, for whatever reason.  It may delay the “running out” a little bit.

I, for one, am very happy with the reduction in fuel consumption at both the national and personal level.  Hopefully it’s just a start.  If gas gets to $10 a gallon, and I think it will within five years, it won’t bother me a bit.  One of the fundamental premises of this website is preparation and the development of resiliency in one’s economic and personal life.  Best to take that to heart and get ready as opposed to demanding another SPR dump or a reining in of the speculators.