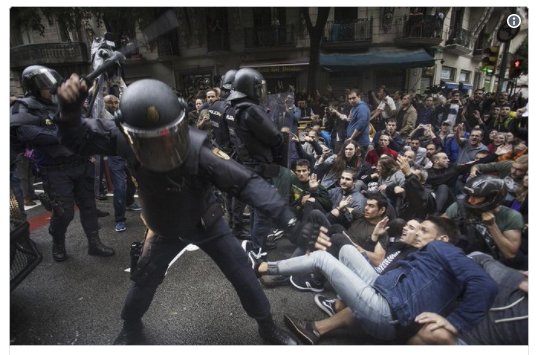 Over 800 people confirmed injured by the police trying to stop the #CatalanReferendum – a hashtag you should use if you want to see what’s happening on Twitter or Facebook. The era of the state and “Approved” (read: complicit) media hiding the truth is over. Nearly everyone has a phone with a camera and video camera in it, and access to social media.

Short version: the Catalan province is basically the economic powerhouse of Spain, sort of like their Texas. They want out. Since a huge amount of the government’s revenues come from taxing the province, Spain does not want them to leave.

Below two pictures of local Catalan firefighters acting as a line of human shields to protect the local protestors from Spanish riot police: 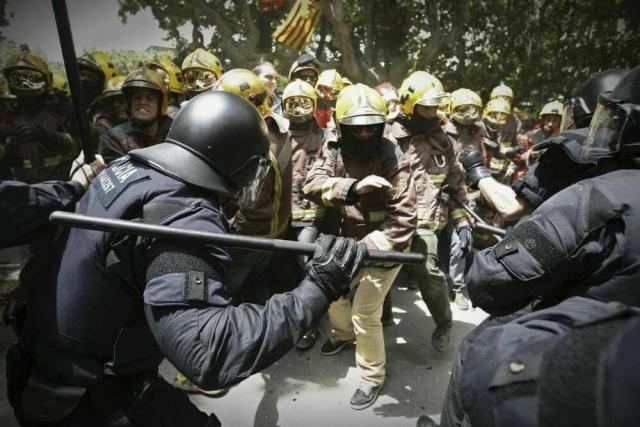 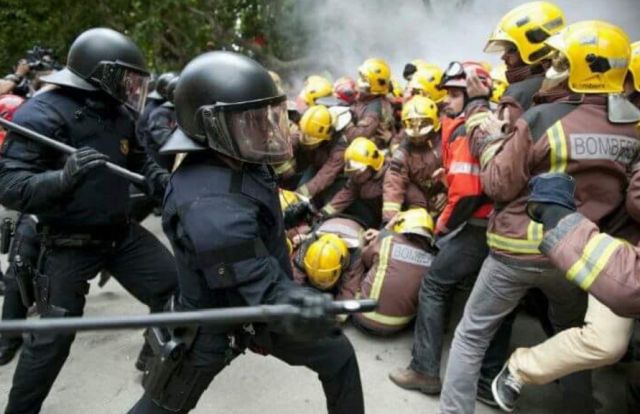 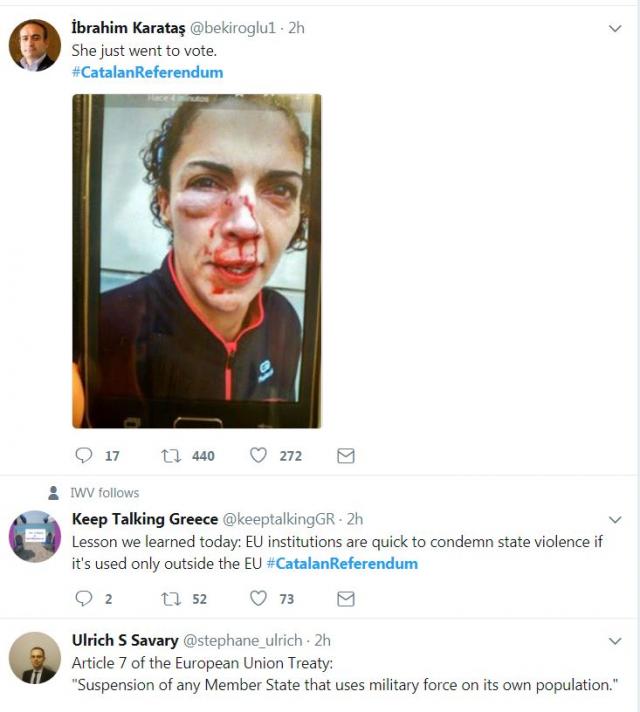 Not to mention the police raids on polling stations, all on video.

Here they are carrying off a granny, 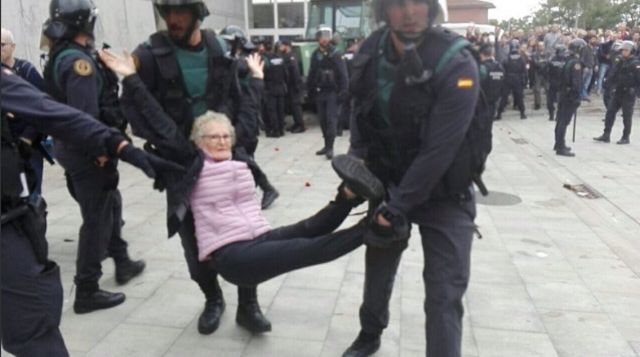 …and as the saying goes, “This will not play well in Peoria (or the heartland equivalent in your country).

There’s even a video of the police beating a wounded man on the way to the hospital. If I find it again, I’ll post.

And last but not least here are Spanish police beating a guy in a WHEELCHAIR. 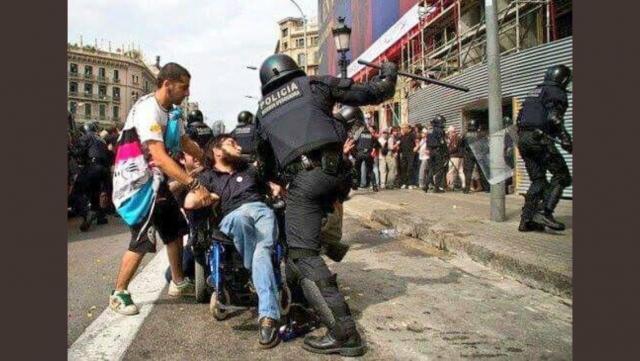 To put it mildly, Spanish PM Ranjoy may have survived one recent vote of confidence but after this I cannot see how he will survive another.

I just read an unconfirmed report that the Spanish government is freezing bank accounts in Catalonia…big, if true, so stay tuned.

Charles' article emphasizing the way that the elite will tweak the rules to maintain their plunder seems very timely to me also.  But the elite do not enforce the plundering themselves.  They have LAW ENFORCEMENT personnel do that on their behalf.

The photos above do not even show the elite.

They send in paid "muscle," armed and armored, to beat the people who are not complying with the demands of the elite.

So the question is, What role will our police play in this process?

Whom do you protect and serve?

You'll know we've taken another big stairstep down in the societal decay process when you see law enforcement personnel on BOTH sides of violent confrontations, as is now happening in Catalonia.  As long as law enforcement is on ONE side that is indicative of TPTB being in unison and working together.  When you see law enforcement being deployed on opposing sides you'll know that various elites are in open conflict and serious enough about it to begin deploying their forces accordingly.  That is a big risk for the elites, as it exposes them to being on the "wrong" (losing) side.

The other dynamic to look for is when police and other enforcement agents take the initiative to refuse orders they are given or take rogue action because of their personal values and ethics.  That will get into the mix described above.

"Welcome to the Hunger Games. And may the odds be ever in your favor."

The Catalunya debacle was trending viral yesterday after the vote, and it was not putting a good light on the EU project.

And now? Not too much of it at all on the MSM feeds, almost nil actually. "Correlation does not imply causation" and some such, of course.

My prediction: Las Vegas shooting will knock Catalonia off the headlines, at least in the US.

When I saw the photos and the videos from Catalonia (especially of the white haired old ladies in various states of distress) who were beaten for the temerity of trying to vote, I had two thoughts:

1) The gang in charge of Catalonia played this perfectly.

2) Rajoy walked right into a trap.  He's literally the worst strategist ever.

The Catalan voters went from a 46% YES position to – perhaps – a 60% YES position after the recent tactics by the central government.  If there ever was a way to push people out, it was exactly the tactics used by Rajoy.  Its almost as if he was working for the Catalan government.  They really couldn't have ordered up a better villain from Central Casting.

After all, Quebec got to vote, and so did Scotland.  When push came to shove, they all voted to stay.  And Catalonia probably would have voted to stay also, if Rajoy had only played nice.

Man.  I just marvel at the idiocy.

After all, Quebec got to vote, and so did Scotland.  When push came to shove, they all voted to stay.  And Catalonia probably would have voted to stay also, if Rajoy had only played nice.

Did Quebec and Scotland really vote to stay?  Uh-huh

To say that the LV shooting was 'odd' is an understatement.

Nothing about the shooter adds up, making this one heck of a mystery, with an extremely weird timing to knock the Catalonia headlines down several important notches.

Before I begin, let me clearly state two things. First, as I note in the title of this post, my observations are based on early reports, and early reports are often wrong. Second, do not read this post as implying any sort of conspiracy theory of any kind. I’m merely noting the facts as we currently understand them — and how they differ from recent mass shootings.

As virtually everyone has noted from the abundant video footage of the incident, it certainly sounds as if the shooter used either fully-automatic weapons or semi-automatic weapons modified (through, for example, a bump fire stock) to closely simulate automatic fire.

Moreover, the police are reporting that he had “more than 10 rifles.” He apparently rented his corner room for days and may have even set up cameras to detect when police were approaching. That’s all strange enough, but it’s even more unusual when you consider that his own family apparently didn’t know that he maintained a stockpile of guns. H

So, a person who’s “not a gun guy” has either expended untold thousands of dollars to legally purchase fully-automatic weapons, somehow found them on the black market, or purchased and substantially modified multiple semi-automatic weapons — and did so with enough competence to create a sustained rate of fire.

This same person also spent substantial sums purchasing just the right hotel room to maximize casualties. I cannot think of a single other mass shooter who went to this level of expense and planning in the entire history of the United States.

And there was no real warning? His family was unaware? His brother also reported that the shooter had no meaningful political or religious affiliations. “He just hung out.” At the same time, however, there are reports that a woman told a group of concert-goers, “You’re all going to die tonight.”

I’m not ready to draw any conclusions from these reports, but it’s worth highlighting how extraordinary this attack seems to be.

Given the firepower and the packed mass of people, it’s easy to see how the casualty count was so high, even firing from an extreme range (by the standards of mass shootings.) This was the University of Texas tower attack on steroids, conducted out of nowhere, with meticulous planning and at great expense, from a person who doesn’t seem to fit any normal profile of a mass shooter.

There is much we have yet to learn, but for now, this is one of the most chilling and mysterious events I’ve ever seen.

This is truly very odd.

Here's what I put on my Facebook page earlier:

Here's the thing about moral and values-based positions. They do not change based on circumstances. If they do, they are revealed as fraudulent. Can you imagine the fuss on CNN right now if the police behavior in Catalonia was actually happening in Russia?

Conclusion: The US does care about democracy. It does not (currently) hold a morals or values based position on democracy and voting. It holds a position of political convenience on the matter….which also explains the severe lack of vote count security that exists in the US thanks to wildly insecure e-vote machines and central tabulators.

And here's how the EU bureaucracy central decided to respond to this…and this from Boris Johnson the (formerly) firebrand London mayor who has clearly been assimilated by the Borg.

Responding to the unfolding crisis, Boris Johnson, the Foreign Secretary, told the Daily Telegraph last night: "Obviously we are very anxious about any violence. We hope that things will sort themselves out, though clearly you have to be sensitive to the constitutional proprieties."

He added: "As I understand it the referendum is not legal, so there are difficulties."

The referendum wasn't "legal" so that justifies the raw brutality against peaceful voters?  Seriously EU?  This is where you stand now?

This is really messed up.

Time to drive stocks a little higher and gold lower.  What else is an increasingly scared elite to do besides pat themselves on the back with more market returns?

If she should become unable to tell her story, my suspicions would rise significantly.

And what is with the "10 guns" thing?  A person can only fire one gun and reloading depends on having more magazines, not more guns.

Remember the 9/11 hijackers who left a satchel in an airport rental car that contained the 19 names, the flight manual for the jet, an audiotape about preparing for jihad and a will.  Planted evidence found immediately leading to a certain explanation.

I would point out that the University of texas shooter in 1966 was an odd case too.
Not that there was anything of conspiracy there. Just, sometimes, things go wrong in a wierd way.

Though his tumor triggered his “fight or flight”, he practically made it impossible for himself to take down the police when they got up to him. That implies to me that he really did want to be stopped. Just, because of the tumor, he was crazy.

Does that mean that odd things here are not of conspiracy? No. But it doesn’t mean it is, either. Eventually, we may know. With all the shenanagans of our government, it probably won’t be in this lifetime. And that isn’t odd either.

It is what it is.