The Situation in Ferguson, MO

More facts as time marches on.

My prediction: Wilson will be found justified and riots will intensify. I wish there were a way to make all this just stop.

Justification for use of deadly force (and swat team raids) to bring in suspects for questioning in non-violent crimes.

Tom (and others in law enforcement or law),

I found the article you posted yesterday on the legal prerequisites for use of deadly force by LE (and citizens) to be very informative and is much appreciated.  An officer can shoot a suspect:

2.  to stop a fleeing suspect in a violent crime.

So I am perplexed as to the justification for the use of heavily armed SWAT teams to raid the homes and businesses of non-violent suspects (not convicted, just suspected).  If one is NOT justified in using deadly force, when is it justified to have a SWAT team point combat rifles, pistols and sniper rifles at a person?

1.  Franklin Sanders had a home-based family business in Tennessee where he sold gold and silver coins.  He asked the local government 5 times in certified letters whether he was required to collect state sales tax on PM sales or whether it could be considered an exchange of one type of money for another (analogous to exchanging pesos for dollars or two $5 for a $10–situations where no sales tax is collected).  They did not answer his letters.  Then, a SWAT team, kicked down the door, tackled him to the ground, tackled his children and placed everyone in handcuffs including his 6 yo daughter.  Everyone, including his small children were taken to jail.  The crime he was accused of:  failure to collect state sales tax.

2.  A multi-agency "fusion team" raided Rawsome Foods Co-op in the LA area.  (This was a small store where local farmers and cheese makers could buy and sell raw milk products to other members.)  They were raided by a SWAT team, everyone forced to lie down on the floor at gun point, and handcuffed. The crime:  suspicion of selling unpasteurized milk products.  The SWAT-team-escorted-health-department-officials then destroyed over $10,000 of raw milk products by breaking the bottles of milk on the ground, confiscating all the cash registers and computers and driving away with a truck full of organic produce (deemed "evidence").  (Charges were dropped later.)

My question here is:  In a situation where use of deadly force is clearly not indicated, what is the justification for pointing a firearm at a person?

I agree. It would be nice if it stopped. But I think this is a glimpse of where we are headed as a society. Rather than having a rational discussion at a town meeting, governmental agency chooses to prepare for war. The example comes from the top down but not the bottom up. This is a bad trend and requires a rethink of our approach to preparedness IMHO.

Being a part of a community and having that discussion now seems more than ever like a good idea.

On the link about Wilson's injuries.

Sandpuppy correctly challenged the link via PM, saying while it is all over the place, everyone is linking to this same site.

I then went looking and found this:

The entire right wing universe (including Drudge Report) is now screaming about this post by, yes, the Dumbest Man on the Internet again, claiming that anonymous sources told him officer Darren Wilson suffered an “orbital blowout fracture to the eye socket” in a struggle with unarmed teenager Michael Brown

It’s possible that someone did leak this information to Hoft, but I’ll remind my readers that Jim Hoft is probably the single most dishonest right wing blogger on the Internet as well as the dumbest, with a very long history of distorting facts and completely making stuff up to push his far right, often overtly racist agenda.

This is the only information I could verify in multiple sources, which is nothing more than a confirmation of some injury without specifics.

The officer was taken to an area hospital where he was treated for a "swollen face," Ferguson Police Chief Tom Jackson said, adding he had not personally seen the officer's injury.

He was released the same day. Jackson said he has spoken to the officer, who was "very shaken about what happened that day and the aftermath. … He's hurt."

The officer was taken to an area hospital where he was treated for a "swollen face," Ferguson Police Chief Tom Jackson said, adding he had not personally seen the officer's injury.

He was released the same day. Jackson said he has spoken to the officer, who was "very shaken about what happened that day and the aftermath. … He's hurt."

I will note that in the video sandpuppy linked above of the other eyewitness, her video shows a lot of officer Wilson (the balding cop) pacing about.

Not once could I detect him reacting to a facial injury.  He never touches, holds or even briefly rubs his facial area.  While he could be in some form of shock, my experience is that even then people will usually hold or touch an injured area, especially when it's to their head/facial region.

His hands are on his hips and going through the usual motions associated with pacing.

I'm open to some other interpretations (like maybe that's not him in the video?) but the guy I see does not have a major injury to his face.

over 50 websites trying to make heads or tails of this, and while I do believe that this particular website is manufacturing this particular story, I don't think that video evidence you point to is legit. Based on all I have read, the officer in the video is not Wilson, he was taken away immediately when 2 other officers made it to the scene. That comes from a number of sources that I do not have immediate links to. Perhaps one of our LEOs could chime in, but that would certainly make sense to me that the officer involved in the shooting would immediately be removed from the situation, weapon taken as evidence, etc, not just holster back up and saunter around potentially changing the crime scene, even if they were not injured.

We probably will not have all the details until they come out in court.

It felt as if I was participating in a made for television movie of an American coup d’etat.

You were.  In my own mind I am convinced to this day that event was staged; a "training exercise" of sorts.  I am also deeply concerned about the direction things are going in this country.

Yep…Ferguson law enforcement is now in overdrive to protect themselves (and to a large extent the rest of the nation's local law enforcement agencies by manipulation of facts, video, and eye witness accounts).  As side note I got hooked recently into watching the made for TV drama Prison Break which aired in 2005  (I am one of those types that waits till these shows hit Netflix or Hulu so I can watch them back to back on a rainy day and without commercial breaks).  Anyway I digress…the show depicts extensive corruption, crimes and cover-ups at all levels of government and a rather astounding breadth of capabilities when it comes to the use of "technology" in all forms as means to discredit and control its subjects.  Frightening.

(…)I don't think that video evidence you point to is legit. Based on all I have read, the officer in the video is not Wilson, (…)

Well, it doesn't mean much but CNN went with the interpretation that it was Wilson…so we might hope that they'd try and vet things a bit before running with a video but my actual evidence is: 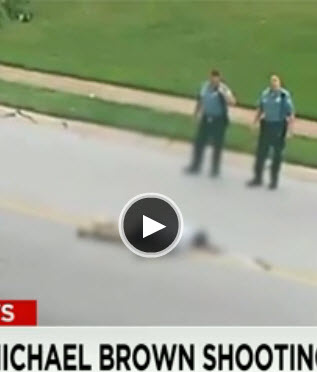 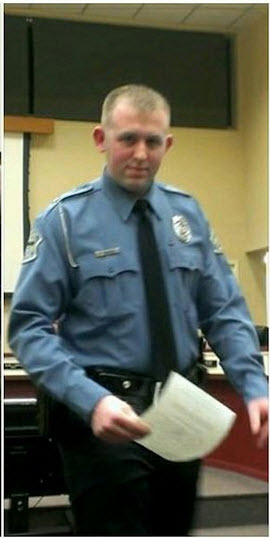 There's either a a pair of Doppelgangers on the force, or its Wilson.