The Situation in Ferguson, MO

The U.S. government agreed to a police request to restrict more than 37 square miles of airspace surrounding Ferguson, Missouri, for 12 days in August for safety, but audio recordings show that local authorities privately acknowledged the purpose was to keep away news helicopters during violent street protests.

On Aug. 12, the morning after the Federal Aviation Administration imposed the first flight restriction, FAA air traffic managers struggled to redefine the flight ban to let commercial flights operate at nearby Lambert-St. Louis International Airport and police helicopters fly through the area – but ban others.

Activists asked Wednesday for advance notice before prosecutors announce whether a Ferguson police officer will face charges in the shooting death of Michael Brown, saying they can help prevent widespread violence if they have 48 hours to prepare for protests.

Members of the Don't Shoot Coalition said at a news conference that they want to "de-escalate violence without de-escalating action" once a grand jury decides whether to indict Officer Darren Wilson, who is white, for the Aug. 9 shooting of Brown, who was black.

The coalition represents more than 50 organizations including union workers, clergy, anti-war activists and black empowerment groups. Its members are leaders of the protests that erupted across the region after Brown's death and have continued in the three months since.

The parents of Michael Brown will meet with about 20 representatives of the Obama administration in Geneva, Switzerland, before pleading their case to the United Nations Committee Against Torture, according to the director of the nonprofit group organizing their trip.

A police report detailing a fight last month between members of Michael Brown’s family over the sale of commemorative t-shirts identifies the late teenager’s mother as one of the “attackers” who beat and robbed vendors selling the merchandise from a tent in a Ferguson, 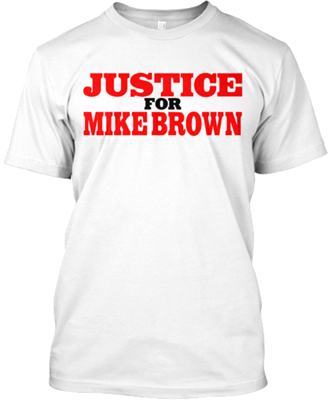 A copy of the Ferguson Police Department report was provided yesterday by city attorney Stephanie Karr. When TSG requested the document two weeks ago, Karr noted that Brown’s mother, Lesley McSpadden, was “described in the report” and had “specifically requested that the report be withheld from the media.”

Karr added, “Knowing this, do you still want a copy of the report?”

The violent October 18 ransacking–which police have classified as felony armed robbery–remains under active investigation, said Karr. “No charges have been filed yet and no decision about charges will be made until the investigation is concluded,” the lawyer told TSG yesterday.

Walk down West Florissant Avenue, and the scars of the summer are still there. The door and display window of a beauty supply store remain covered with plywood; a glued-up poster, “Beauty Town Is Back,” is the one hopeful sign of the life inside. A cellphone store, too, still has the plywood up from when riots and confrontations with the police shook this neighborhood. And the Family of Faith Baptist Church uses its billboard to proclaim, “Join us as we pray for peace.”

But few are expecting peace as this St. Louis suburb prepares for a grand jury decision, expected in the next few weeks, on whether to indict the police officer who fatally shot an unarmed black man in August, inciting months of protests and putting Ferguson at the center of a national debate over the police and race.

Here, where heavily fortified police officers faced the demonstrators and the nights sometimes turned violent, even those shopkeepers who put in new windows are boarding up again.

“I hate this,” said Dan McMullen, the president of Solo Insurance Services, as he sat behind his desk on Thursday. During the course of a 20-minute conversation, his phone did not ring; no customers walked through the door. “Business is terrible,” he lamented. “The customers don’t want to come here anymore. We all know the grand jury is going to come back in the next couple of weeks, and everyone knows there won’t be an indictment. This time around will be a lot more violent.”

Ferguson Mayor James Knowles told local media this week that authorities must "prepare for the worst" and he expects demonstrations across the area.

He and his administration didn't respond to CNN's inquiries about whether city officials would agree to the coalition's requests. Ferguson police also did not respond to CNN's questions about what that department thinks of the "rules," but St. Louis County police said their department "endorses the statement from the Don't Shoot Coalition regarding the sanctity and preservation of human life. To that end, and in the spirit of building communications, members of the Unified Command have met with the coalition to define common goals."

Since August, a disparate array of demonstrators — some from longstanding organizations, others from start-ups with names like Hands Up United and Lost Voices — has been drawn here to protest not just the shooting of Mr. Brown, but also the broader issues of racial profiling and police conduct.

Now, with the grand jury’s decision expected in the coming days, the groups are preparing with intricate precision to protest the no-indictment vote most consider inevitable. Organizers are outlining “rules of engagement” for dealing with the police, circulating long lists of equipment, including bandages and shatterproof goggles, and establishing “safe spaces” where protesters can escape the cold — or the tear gas.

As the nation waits to hear whether a Missouri police officer will face charges for killing unarmed teenager Michael Brown in Ferguson, Mo., the FBI is warning law enforcement agencies across the country that the decision “will likely” lead some extremist protesters to threaten and even attack police officers or federal agents.

Peaceful protesters could be caught in the middle, and electrical facilities or water treatment plants could also become targets. In addition, so-called “hacktivists” like the group “Anonymous” could try to launch cyber-attacks against authorities.

“The announcement of the grand jury’s decision … will likely be exploited by some individuals to justify threats and attacks against law enforcement and critical infrastructure,” the FBI says in an intelligence bulletin issued in recent days. “This also poses a threat to those civilians engaged in lawful or otherwise constitutionally protected activities.”

it is to read thru this thread now that we have some real answers. Links of "witnesses" stories completely gone, or substituted with another story. Reports by people who were easily proven as false based on physical evidence supplanted by altered narratives. Reporting of "Orbital Blowout Fracture" not removed, but replaced by real photos now released with no mention of retraction of prior statements nor apology.

Before, I was annoyed at the 24Hr news cycle, now I am  just plain done with it.

Sometimes I feel really dumb for playing along with the game. Now is one of those times.

As I watch what is unfolding now, I see a few things:

Some protesters are genuinely peaceful and looking to make long lasting improvements.

Some are genuinely pissed off and want revenge.

Some are there because the cameras are there.

Some are there looking to win the lottery.

All of them are being manipulated by the media.

I'd be curiuos to know if my city would be on fire were it not for CNN, Fox, MSblahblahblah……….

(with the generous help of other pp'ers), I find it very surprising that many of my fb friends still believe that Michael Brown was an innocent victim killed for stealing cigars (or jay-walking).

I do very much believe that the relationship of the police and the public, and the African-American public in particular, is very very problematic.  And if I were African-American I would be furious for the injustices of the last century and a half, some of which that are still ongoing.

But this particular police officer and this particular citizen just don't fit the bill of the violent racist cop and the innocent black citizen gunned down for no good reason.

Like you Ready, I wonder where those witness accounts are now and the "orbital blow-out fracture" story–where did that come from and where did it go to?

My wife drives into St Louis tomorrow to spend the holidays with family and I really wish she would travel armed.  I fear she might inadvertently drive into a hot bed of public fury and be endangered.

This is a terrible tragedy. It isn't a metaphor for police brutality or race repression or anything else, and never was. Aided and abetted by a compliant national media, the Ferguson protestors spun a dishonest or misinformed version of what happened—Michael Brown murdered in cold blood while trying to give up—into a chant ("hands up, don't shoot") and then a mini-movement.

When the facts didn't back their narrative, they dismissed the facts and retreated into paranoid suspicion of the legal system. It apparently required more intellectual effort than almost any liberal could muster even to say, "You know, I believe policing in America is deeply unjust, but in this case the evidence is murky and not enough to indict, let alone convict anyone of a crime."

If your wife is from STL, she will know what to do. It's very clear the areas to stay away from.

There have been quite a few highway closings as hundreds of protesters flood the roadways and camp out for a while. Major PITA if you are caught in it, but I am not aware of any injuries due to the stoppages. They have been all over the place, so it is pretty close to impossible to predict where and when, just stay tuned to 97.1 as she drives thru and they will alert her, hopefully in time for her to change her route.

I am not carrying out of fear, at this point there has been virtually no impact on me and mine. It's more of a duty thing – I feel the duty to be prepared to protect my family and employees in a situation that can quickly change. But I often carry even when we are not in the middle of a manufactured race war too 🙂   If your wife is uncomfortable with carrying a weapon, perhaps pepper spray will put both your minds at ease?

Wilson spoke to ABC News' George Stephanopoulos on Tuesday, saying, "I know I did my job right." In the interview, Wilson said he feared for his life as he tried to defend himself against the 18-year-old, who was allegedly throwing punches at him while Wilson was inside his police vehicle. The altercation then shifted outside the vehicle, where Wilson said Brown charged at him after initially running away. That's when the fatal shots were fired. While witness accounts heard by the grand jury differed, there were some that appeared to back up Wilson's version of events.

McSpadden said her son does not have a history of violence.