The Rooster who had big balls

Being raised as a city person has been an obstacle to my countryfication…..but I am trying hard to learn common sense and see rural living as the best ticket to survival at this point. My homestead, gardens, and especially chicken flock are giving me comfort as the news cycles explode and personal battles on PP are becoming less and less interesting.

I am a new chicken farmer. I started with a flock of 52 birds. 12 from Tractor supply (all pullets) and 40 from Ideal Poultry. One died as a chick ….to be expected….so I am told. All the rest grew. The 12 were 6 weeks older than the 40. The 12 started producing and I let them free range during the day and locked them up at night. The 40 were kept in a fenced area and also locked up at night.

About a week ago I lost 4 of my older girls to a predator during the day. Pretty sure it was 4 legged and not a hawk. I was heartbroken and apologized to the other Girls for not be a good guardian and quickly put up a 150’ x 200’ temporary fence to keep the girls closer. I used construction plastic orange fencing that comes in 100’ x 4’ rolls for $29….and teeposts  driven every 10’ to 12’. And standoffs with a hot wire 10” off the ground on the outside…..So far no more kills.

But a second thing happened ….In the 40 younger ones I got through the mail 8 were roosters. They were fine for 4 months but when they got their testosterone …….or whatever equivalent hormone they get……..they got super aggressive with the pullets and during the fencing change I had to let the old girl’s flock merge with the younger flock. Although the Roosters were younger they were vicious with the old girls and literally gang raped my sweet laying hens.

So I quickly realized that although some people say as 6:1 hen to rooster ratio is good, I decided that a 25:1 ratio is better. So I had to learn how to butcher in one day. We were playing bluegrass/gospel music at a local benefit 3 days ago on Sunday and before the set we were talking chickens….which beats the hell out of talking politics…..and Linda said that she would lend me a chicken plucker machine. She said that it was the best thing ever invented. And Tom….our fiddle player ….offered to teach me how to butcher. So yesterday we sent 6 roosters to the frozen land. The highway department had donated some chicken cones to Linda many years ago and one fit perfectly on my heavy duty ladder. I had read that 145 degrees was optimal for dipping the birds to loosen the feathers but Tom said it needed to be 155.

It went smoothly….Took longer to set up and clean up than to butcher 6. The machine was amazing ….In 1 minute all the feathers were off and it didn’t damage the skin at all. Gutting was interesting but not difficult and it was amazing that one rooster had huge balls, compared to all the others. (Maybe he was the instigator of all the turmoil). Being a city person  originally I didn’t even know they had that kind of equipment.

Sorry….the thread was neutered….and all comments lost. Thanks for your kind responses.

Robbie…..My wife wants to Caponize everything male on or ranch. Horses…dogs…even me. My buddy said that the Ag teacher used to show the kids how to do it at school and he killed most of the Roosters…..Not sure its worth the effort….and I want a strong Rooster to protect the girls.

practiced on the rooster who were plucked, ie deceased. Then we tried on live and had fair success. We always keep two roosters of different ages. We had about 30 or more birds when you were here. Only a dozen now that we are empty nesters.

Sorry it was all lost. Happens now and then, and can be frustrating. I’ve taken to storing my comments or, especially, posts, off this site before uploading – looks like you did, too.

@pyranablade
made an interesting comment about Heritage Breeds being more docile. After 6 years of keeping birds I still did not know that – it might explain my current rooster’s good disposition.

I noticed in my last-year’s experience that even while my coop was filled with too many roos coming of age their dominance games were not nearly as violent as I’ve seen in other settings, and almost never escalated to actual attack. They were far more like a couple drunk 20-year-old guys bumping chests in a bar.

My current flock are a true Heritage breed cross, the mating of a Plymouth Barred Rock female and a male from the more primitive Andalusian. The breed is called Blue Plymouth Rock, and the parents of my birds were imported from The Czech Republic by a family hatchery (Freedom Ranger Hatchery) located in PA.

Completely by-the-way, that’s also where I get my true-bred Freedom Ranger meat birds, direct descendants of the French-bred breed that was originally developed for the prestigious French Red Label free range program. They take 12 weeks to maturity but, I swear, their fat is so delightful to touch it’s like raw lanolin – in butchering I constantly want to just rub it over my face and body, it just feels so good, so “right”! And it’s a superb meat, too.

We have had chickens a few years now and I, too, was surprised at the size of the gonads on the first cocks we butchered. Seems like a large fraction of the bird’s body weight to dedicate to the purpose(s). I assume Ma Nature knows best, but it still puzzles me.

What sort of plucker did you use? We have always done it by hand, but we have a number of chickens to do in the near future – plus some ducks. I am looking seriously at acquiring a plucker, but then it is one more piece of equipment to find a home for, maintain, etc. I wish I could find a local source from which to borrow or rent one.

The plucker looks like a washing machine tub with 80 rubber fingers in it. The bottom spins and rubs the bird against the side “fingers” ….Look on Amazon for a picture. There is water running constantly and a drain out the bottom. Very simple machine. 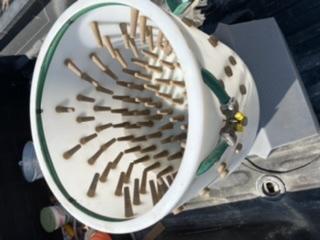 and Youtube has videos on how to make one from an old washing machine, if you’re DIY. The fingers are quite available on Amazon.

Thanks. Not to make a new plucking thread, but I wanted your recent experience. I know there is the ‘washtub’ type and the ‘horizontal drum’ type. I have seen some reports that the former can break bones and otherwise damage birds. However, they seem to be by far the most common. At least with the drum type the operator controls the pressure applied to the carcass so that seems a bit safer. Perhaps someone else has experience with both.