the link between Covid vaccines and periods

Why didn’t doctors listen to women about the link between Covid vaccines and periods?
A new study reveals that thousands of women experienced irregularities after their jab – yet the medical establishment seems disinterested

This week, a study in the BMJ revealed that almost 35,000 British women have reported that following their vaccination against Covid, they have experienced more painful and/or irregular periods.  A month later, they were back to normal.

Dr Victoria Male, a lecturer in reproductive immunology at Imperial College London, who led the work, said that all the main vaccines – Pfizer, Moderna, AZ Oxford – were involved, but there has been no suggestion of a long-term impact on fertility.

This is not the first time a vaccine has been linked with menstrual cycle irregularities. (cites HPV, rubella, typhoid).

Part of the rush to dismiss women on the basis of little to no evidence comes – no doubt – from a well-meaning, but ultimately misguided effort to reduce vaccine hesitancy in young women.

Where are all the outraged feminists screaming about the medical community ignoring women and women’s reproductive health?

This page adds data but there is no context https://openvaers.com/covid-data/reproductive-health

And there is a study starting.

Two published articles on the study: 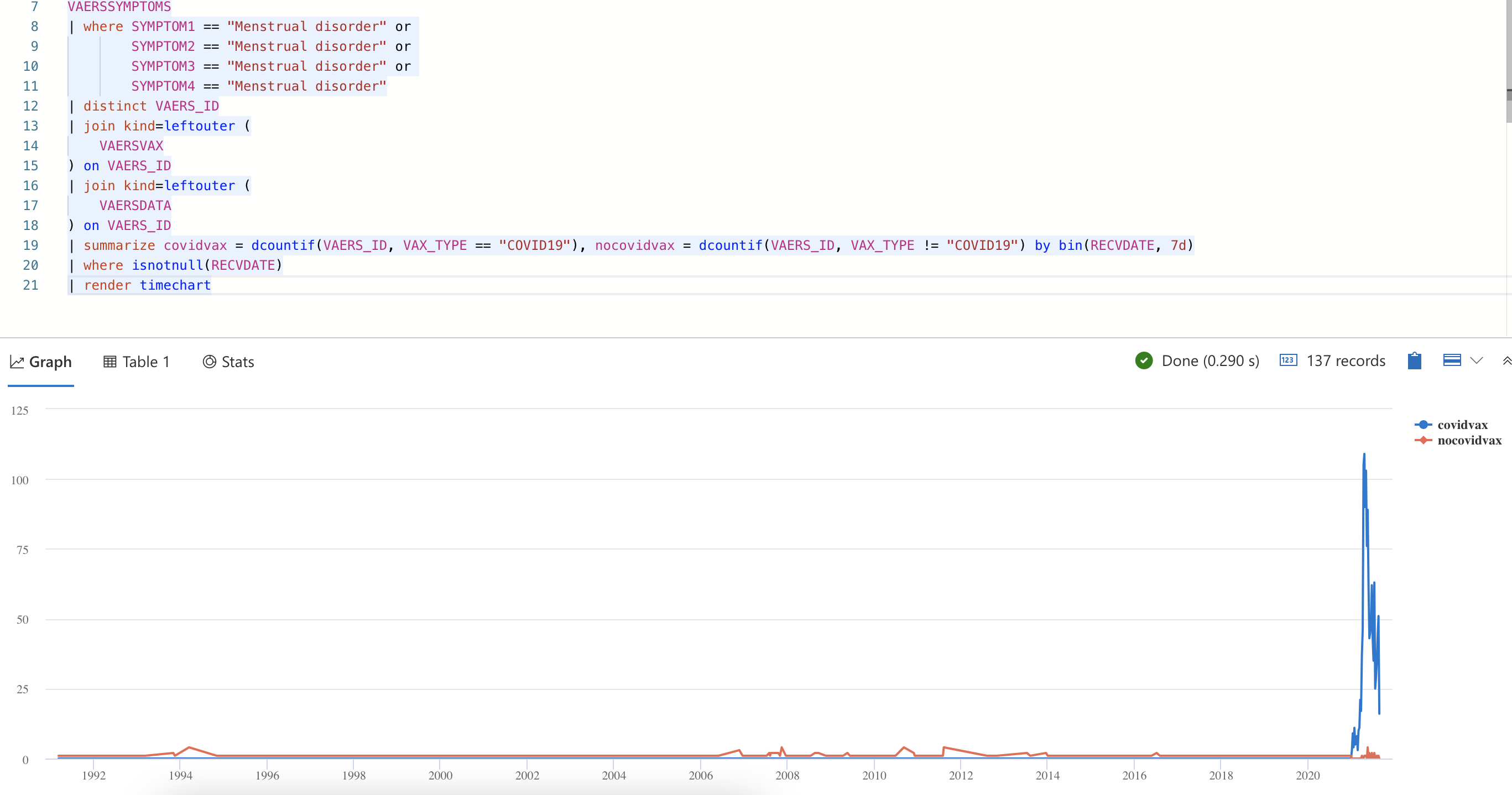 The vaxed women I know have not had a regular period since getting the vax. Days early and days late without any pattern suggesting a return to normalcy. A lab coat can say whatever they like and pretend it’s evidence but annecdotes are revealing the trend. We’ll know for sure next year though.

What happened to “believe all women”?  Or should I call them “birthing people”?

There is gonna be hell to pay once it all comes out.  “Well sure the medical profession lied to you about all these things.  But it was for the greater good.”

Trust will be broken for a generation.  At least.

I’m post menopausal & had a full week period over a month after Moderna shot 1. I haven’t had shot 2. My dr rolled his eyes when I asked if it was possibly related to vaccines. I’ve had my hormones checked to verify menopause-results were clearly menopausal. Last week I had an ultrasound. Normal. Dr scratching his head. I’m scheduled for a biopsy in 2 weeks. I’m relieved that I likely don’t have cancer, but wonder what exactly would be causing a menopausal woman to have a week of bleeding. Bizarre

Also, there certainly wasn’t a Vaers report for me. It was longer than a month after my shot, so it would’ve been thrown out anyway

I think it would be a good project to track fertility in the world, by country, going forward.  I don’t know anything about how this is normally modelled, does anyone here?

I did find this, after fumbling around for a few minutes: https://www.yourarticlelibrary.com/population/3-main-methods-of-measuring-human-fertility/39535

Crude Birth Rate (CBR):
Crude birth rate is a common measure of human fertility. It is obtained by dividing the number of births recorded in a population during a specified years by its total number. This rate is called crude because the differences in the composition, such as age and sex, are ignored in calculating it…

General Fertility Rate (GFR):
General fertility rate is the number of births per 1000 women of reproductive ages. This number of women of childbearing age is taken as a base for calculating the birth rate, instead of the total population…
..This method is an improvement over CBR, as it takes, into account only the population in the reproductive age group, i.e., only the females in the age group 15-49, since it is only these females who can bear children….

Total Fertility Rate (TFR):
The total fertility rate refers to the average number of children that each woman will have during her lifetime. It is an average of the ASFR because, of course, some women will have more, some fewer and some no children at all.

It doesn’t seem to me that any of these metrics are exactly what we should be looking for, so I just list them in passing. There should be a replacement rate and this should need to be recalculated at least yearly to look for changes in velocity and to make other adjustments.

Hmm.  https://energyeducation.ca/encyclopedia/Population_replacement_rate.   seems to be more what we should be looking for.  Per this, the replacement rate “per couple” (what a quaint idea; isn’t that sexist;-?, was 2.1 world-wide.

What we need is a way to look at this in the coming years, by country, by vax status; by ethnicity, etc.  We’d be looking for dramatic instant velocity changes by regions, vax status, etc. and — certainly — for a world-wide estimate on replacement rate as a whole.  I would expect this to be really complicated, but not intractable.   And I would expect it to be really valuable.  I bet Our Masters will be watching this with interest.

Does anyone here have any background in this?  I think it was just today I read about a member here who was an actuary and might be looking for a job.

P.S., I would expect velocity of replacement rate to be falling off a cliff here. It isn’t just an issue of possible vaccine effect, either.  If nothing else, it stands to reason that lockdowns and masks, as well as disrupting social, work, and school interactions should dramatically lower couplings and births as well as other demographic numbers. How many one-night stands did you have last year?  How many weddings did you attend?  How many divorces (divorce rates are way up in Western countries, I’ve noticed).  More important, imo, is to have better numbers for Africa, S. America, and the Middle East. Those numbers will be harder to get, I expect, and especially critical.

Is it possible Our Masters are just playing “Whack a Mole” with us?  That any disruption or uncertainty is a good uncertainty in their game?