The Evolution Of Our “Too Big To Fail” Banking System 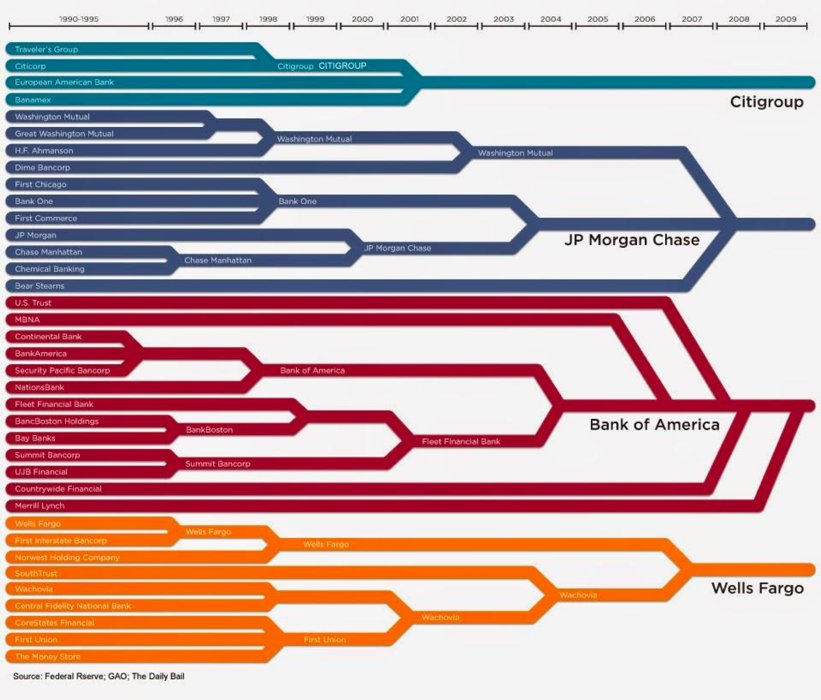 I have seen a similar “bracket” for the airline and airplane manufacturers before. I may have seen one for the big meat producers as well but that was some time ago. I bet there is one for the railroad companies before they were  nationalized (bailed out). I feel it is a function of the growth of our culture and how we organize(d) ourselves. During the beginning of this country there were many markets one could join and even make and so there were many companies serving the needs of the people. We are maturing to the point where our “free” markets are just a small offering of what the cabal wants to provide to their captive audience that can still make them a profit.

I do do believe that voting with your wallet works but I think it requires quite a bit more effort than it may have in the past.

I’ve said this before and I’ll say it again.  The financial, educational and medical scams have one goal.  That is to reach out and grab every last nickle on the table before the fat lady sings. Simple as that. The seven deadly sins.

It would be very interesting to see a chart of the consolidation of banks from the 1930’s.

This has been going on for a long time.

CVS/Aetna and Cigna/ExressScripts, when will it end?   Trumpster hasn’t done anything to correct the core issues.  Tax cut and spending increase?  Temporary bump.

When the Fed was formed as a private entity shares were owned by all the significant banks of the time.  If memory serves me there were a few thousand of them, though their ownership shares were not remotely equal.  When new banks are formed they don’t get ownership in the Fed, that remains with the original shareholders.  However, as banks which origninally owned shares are absorbed those shares get added to the holdings of the acquiring bank.  I also belive (its been several years since I read up on it) some original banks sold their shares in the Fed to other banks.   Though the original ownershp shares were public information, none of the subsequent ownershp changes are public information.

Looks like currency collapses in the emerging markets may be the balck swan we have all been looking for.  “They” say there is no chance for contagion, kinda like what “they” said about the subprime mortage issue.