No one knows what happened.  The caravan has disappeared and this has appeared at the border. 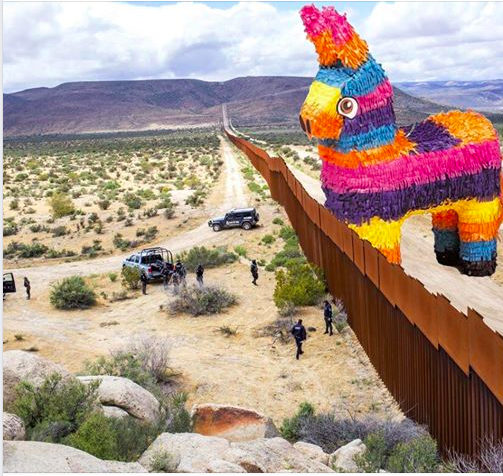 Could I ask you to do something for me?

You claim weapons of mass migration, and there might be something to that. Yes, after completely destroying the protective barrier that the Germanic tribes provided, with their greed and taxes, the Romans were overthrown by a certain very effective strategy of the huns. So you might be onto something.

Could you kindly read the first three chapters of the Art of War by Sun Tsu, and then we discuss how that relates to Rome then, and to America now?

A man died and was sent to the paradise. After a while, he became bored with the paradise, with the eternal quiet, abundance of flowers, absence of worries. So he requested to let him visit the hell as a tourist. God consented. In the hell, he saw people playing cards, drinking wine, and making love. He liked it very much and upon return to the paradise applied for a transfer to hell for good. God consented. As soon a he appeared at the hell’s gate, demons grabbed him and pushed him into a barrel with hot tar.

“Stop it! I was here with a visit and saw the people drinking vodka, playing cards, making love.”

“Don’t confuse the area designated for tourists and sustained by the Propaganda Department, with this area which is for residents.”

The workers are busy tonight. 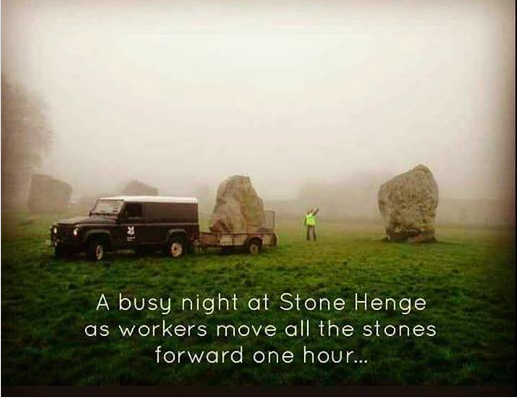 It should read BACK by 1 hour.  From last spring.

A man walks into a bar, and orders a black cherry punch whisky sour with a slice of lime. The bartender says “very good”, goes over and gets the glasses; he picks up one, looks at it — it’s dirty. So he sets it aside, and gets another glass. He holds it up to the light — there definitely is a smeared fingerprint there — it’s dirty too. So he gets a third glass, and inspects it — there’s a lip mark. It’s dirty too. So he takes the three glasses over to the bar’s dishwasher, hands them to the dishwasher, and asks, “what’s wrong with this?” So the dish washer looks at the glasses, says “I don’t know,” and hands the bartender three new, clean glasses. The bartender inspects each one — clean, clean, and clean.He then goes back, takes one of the glasses, and measures out the bourbon, and sets in a few cloves, a cinnamon stick, and squeezes in some fresh grapefruit, lemon, and lime. The lime he sets aside on a plate; the others he discards. Into another glass he pours a measure of black cherry punch. He pours off the bourbon into the glass, slides in the crushed ice, puts it in a shaker, and shakes it up. Knees loose, he shakes it for a full twenty seconds, pours it into a glass, adds an equal amount of perrier spring water, picks up the slice of lime, puts it on the glass and serves it to the patron.

The patron takes a sip, makes a grimace, takes another sip, makes a face. By the time he gets towards the bottom of the glass, he looks at the bartender and says, “I think I know what’s wrong.” The bartender asks, “what is that?” The man says, “well, to be honest, I feel a little bit cheated.” “How so? ” asks the bartender. “I assure you, I measured in the right amount of everything.” “No, no, it isn’t that. It’s that I ordered a black cherry punch whisky sour with a slice of lime; and I think I waited at least five minutes; and now I’m getting to the end, and I discover there’s no punch in my line!

If you’re fortunate to have the correct combination of “drinking genes”, go get loaded (or pissed) today/tomorrow.

I know we’ve all been here, so I’m going to throw this into the Definitive Humor thread.

To pee, or not to pee, that is the question,
Whether ’tis nobler in the mind to suffer
The slings and arrows of outrageous pangs,
Or to take movemnt against that sea of troubles,
And by not opposing, end them? To release: to hold back;
No more; and by a rest to say we end
The bowel-ache and the thousand natural shocks
That flesh is heir to, ’tis a consummation
Devoutly to be wish’d. To relax, to let go;
To let go: perchance to yield: ay, then there’s the rub;
For in that itch of death what stains may come
When we have shuffled off this mortal garb,
Must give us pause: there’s the respect
That makes calamity of so white a cloth;
For who would bear the whips and scourges of time,
The toilet wrong’d, the proud man’s contumely,
The pangs of despised ablution’s, the purification’s delay,
The insolence of office and the spurnings
That patient merit of the unworthy takes,
When he himself might his quietus make
With a bare bodkin? who would fartlets bear,
To grunt and sweat under a wearsome air,
But that the dread of something after,
The undiscover’d prize from whose borning
No hand-washer returns, puzzles the will
And makes us rather bear those ills we have
Than fly to others that we know not of?
Thus conscientiousness does make cowards of us all;
And thus the native hue of resolution
Is sicklied o’er with the pale cast of thought,
And enterprises of great pith and movement
With this regard their currents turn awry,
And we lose the name of action.


(okay, okay… technically a bodkin is a stilleto. But methinks your mind’s eye, being contextual, will put a different image in.)